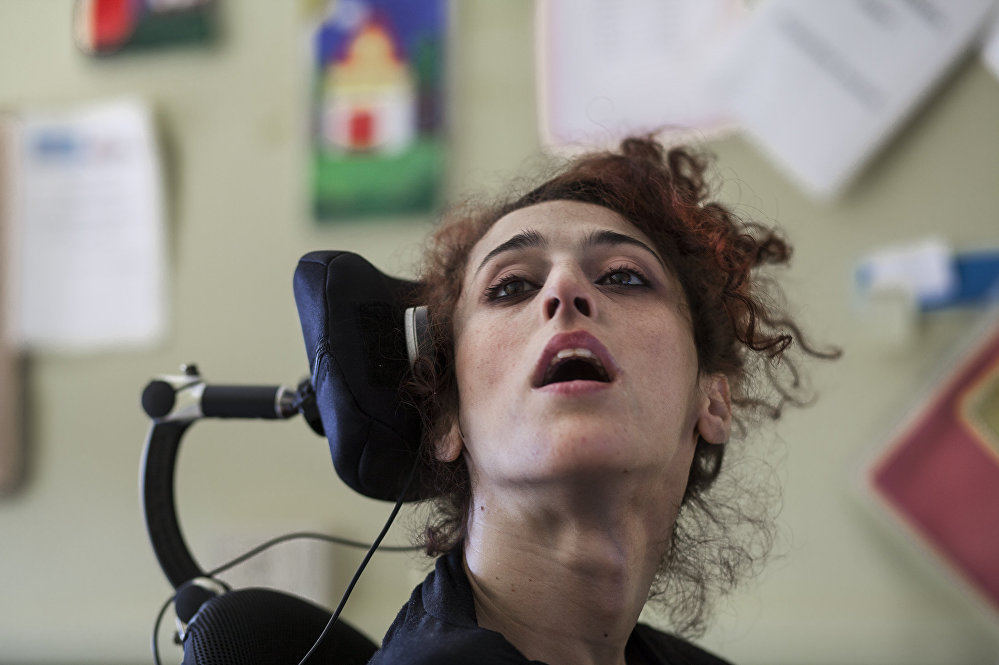 Stenin Contest: The girl who won’t give up comes to Moscow

MOSCOW, November 28, Rossiya Segodnya Press Service – Letizia Renis, the girl who was depicted in the photographs that received Grand Prix at the 2016 Andrei Stenin International Press Photo Contest, has made her first international trip to tell the world about herself. Letizia, who has spastic quadriplegia, has flown from Rome to Moscow to see Red Square and the Kremlin and to prove that the impossible is possible. Russians first learned about Letizia when her compatriot, Danilo Garcia Di Meo, was proclaimed the best young photographer at the 2016 Stenin contest organized by Rossiya Segodnya. Letizia didn’t think twice when she received an invitation to visit Russia. As soon as the doctors gave her the all-clear, she went to Moscow, where thousands of people have seen the series titled “Letizia, A Story of an Invisible Life”.

Letizia, 32, has cerebral palsy caused by a lack of oxygen during birth. She cannot talk and has no control of her body. What she controls best is her head and eyes.  Letizia can communicate through a sensor at the back of her head and a computerized wheelchair with sensors in the headrest. With their help she learned how to use a computer and a smartphone to write messages and make video calls.

Letizia talked about her dreams at a news conference at Rossiya Segodnya. Letizia Renis, the main character of a winning series of photographs at the 2016 Andrei Stenin International Press Photo Contest: “I would like to be able to be independent, as much as it is possible. But most of all I want to meet my true love, to love and be loved.”

Letizia’s life is a tale of everyday heroism. In the face of incredible difficulties, Letizia tries to live a full life. She is a secretary at the local disability assistance center. She meets with friends and inspires them with her incredible will and zest for life. The trip to Russia will be her first glance at the world outside Italy.

Photographer Danilo Garcia Di Meo, 1st place and Grand Prix of the 2016 Andrei Stenin International Press Photo Contest: “I am grateful to the Stenin Contest jury for giving me the first prize and to Rossiya Segodnya, the contest organizer, for an opportunity to show my series of photographs on several continents and to show Moscow to Letizia. Her story is a story of determination and triumph, a story of a person who has overcome stereotypes and has shown us that you can beat adversity and be happy.”

Oksana Oleinik, Head of the Visual Projects Service, Rossiya Segodnya: “The aim of the contest is to discover new names in photojournalism and to identify talented young photographers who want to make a statement. And we have succeeded in our undertaking: the photographs made by the 2016 Grand Prix winner Danilo Di Meo make people stronger and inspire love and hope.”

The Andrei Stenin International Press Photo Contest is held by Rossiya Segodnya under the patronage of the Russian Federation’s Commission for UNESCO. It aims to promote young photographers and attract public attention to photojournalism and its mission. It gives a chance to talented young photographers who are open to everything that is new and who attract our attention to people and events.
The 2016 contest was the largest ever since its establishment. The jury had to choose from among 6,000 entries by young photojournalists from 71 countries, including Russia. The contest covers five continents, stretching from Europe and North and South America to Africa, Australia, the Middle East and Southeast Asia. Russian participants come from all parts of the country – from Kaliningrad, Moscow and St. Petersburg in the west to Vladivostok in the Far East and Yalta in the south.