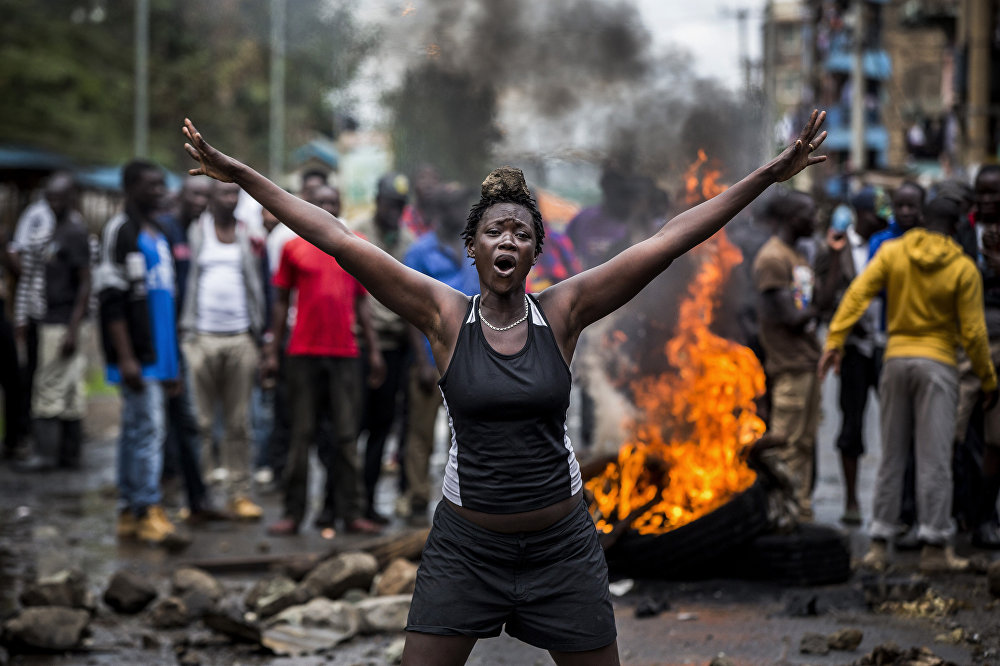 First prize in the Top News category went to Justin Sullivan (South Africa) for his image Stand Off, in which a police officer points his gun at 3 occupants hiding under a table, and Luis Tato (Spain) for his photo series Kenya's Post-Election Turmoil.

In My Planet category, first place was awarded to Sergei Gapon from Belarus for his image Cranberry Heart shot from a drone, while the winning photo series was Alyona Kochetkova’s How I Fell Ill, in which she chronicles her dramatic struggle against cancer.
In the Sports category, the winners are Taisir Mahdi from Iraq for his photograph The Desire for Life, picturing a young amputee playing football, and Andrea Alai from Italy for his photo series Ultras about the tifosi (fans) of Albenga Calcio club from a small town in Liguria.

In the category Portrait. A Hero of Our Time, Israel’s Oded Wagenstein took first place in singles with his image Rosebud showing a child from a Nenets tribe, while Iran’s Shiva Khademi won with her series Gemini.

Director of Rossiya Segodnya’s Photo Service Alexander Shtol said: “Every year the contest expands its geography and has more and more applicants. In 2018, we received almost 6,000 images from 77 countries around the world, setting a new record. Young photo journalists have a very acute sense of what matters the most, and what is going on in the lives of people, countries, and the world in general. There were never as many images on social issues as this year. It is also pleasing to note the improving quality of submissions, as well as the fact that the contest has become so prominent within the community of photo journalists.”

The contest counts among its partners the International Committee of the Red Cross (ICRC), one of the world’s largest humanitarian organizations, as well as the Shanghai United Media Group and Al Mayadeen pan-Arabic TV network.
Two Iranian photographers will receive special prizes in the Humanitarian Photograph category established by the ICRC. Omid Vahabzadeh won the prize for his image Tehran Attack in which a two-year-old boy is being lifted into the Iranian parliament building after the June 2017 terrorist attack in Tehran. Younes Khani Someeh Soflaei won the prize for his series …And Life Rises about the everyday life of people affected by last year’s earthquake in Kermanshah Province, which killed almost 600 people and destroyed more than 30,000 buildings.

Head of ICRC’s Regional Delegation in Russia, Belarus and Moldova Magne Barth said: “Photography enables us to see and feel the diversity of the world in all its beauty, complexity and tragedy. In the contest submissions, we see the challenges today’s world is facing, as well as its beauty. Most importantly, people are at the center of almost all images, showing their destinies, how they overcome challenges, and how they try to change life for the better. This year we awarded the ICRC special prize for photographs that tell stories of courage, patience and self-sacrifice.”

The special prize awarded by Shanghai United Media Group and Al Mayadeen TV went to Taisir Mahdi for his photograph The Desire For Life, which also won in the Sports category.

President of the Shanghai United Media Group (SUMG) Qiu Xin, said: "Rossiya Segodnya is a strategic partner of Shanghai United Media Group, the parties advance comprehensive cooperation in practice. SUMG has partnered with the Andrei Stenin Press Photo Contest, organized by Rossiya Segodnya, for the third time and established a special prize. The media groups will also cо-organized an exhibition in Shanghai for the winners of the photo contest. In four years, the Andrei Stenin Press Photo Contest has become a platform where new names in photojournalism are discovered and criteria of press photography are formulated. SUMG is happy to contribute to the professional development and success of young photojournalists.”

The Head of the board of directors of Al-Mayadeen TV Ghassan bin Jiddo, said: "Al-Mayadуeen TV considers it to be its duty to pay tribute to the memory of the photojournalists who sacrificed their lives in the line of duty while capturing reality as it is. The Arabic TV channel supports the Andrei Stenin Press Photo Contest because of how sincere and at a high professional level it carries out its mission of protecting human rights of the oppressed and always shows solidarity with a person.”
The full list of contest winners and runners-up is available at stenincontest.com. The awards ceremony and exhibition of the winning works will take place on November 8, when the winner of the 2018 Grand Prix will also be announced.

The Andrei Stenin International Press Photo Contest was launched by Rossiya Segodnya under the aegis of the Russian Commission for UNESCO. Its main goal is to support young photographers and draw public attention to the challenges of modern photojournalism. This contest is a platform for young photographers; talented, empathetic and open-minded, they draw our attention to people and events around us.