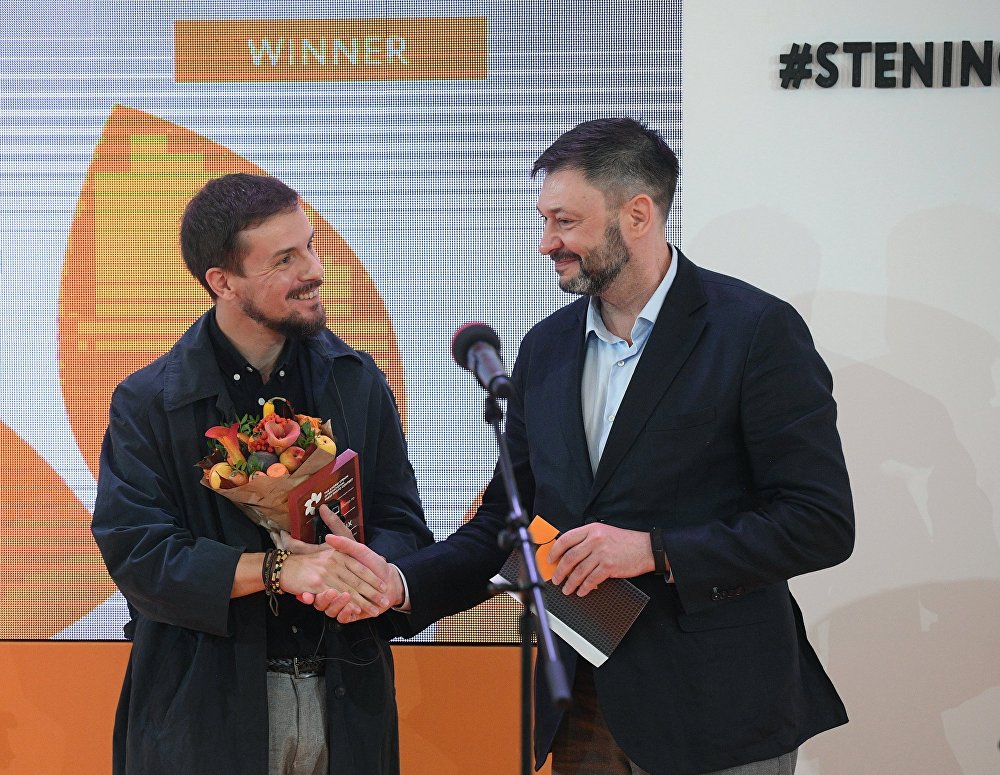 MOSCOW, September 10 — Rossiya Segodnya Press Service. The main intrigue of the Fifth Andrei Stenin International Press Photo Contest was revealed today at a gala ceremony at the State Historical Museum. The competition’s top award, the Grand Prix, went to Italian photographer Gabriele Cecconi for the photo series, “The Wretched and the Earth.” The main characters in this series are the Rohingya people that are forced to migrate, and the southern territories of Bangladesh that are declining in slow destruction due to this migration. Using color, checkered light and shade and angle Cecconi conveys the intolerable viscosity and inevitability of the environmental disaster that is taking place before our eyes.

Speaking about his participation in the context Cecconi said: “It's a real privilege having the opportunity to compete with other talented photographers in the memories of a young colleague died doing his work. Memories is identity and this award help to conserve the identity of Andrei Stenin and somehow continue his work through the eyes of the participants photographers. I'm glad to be among the finalist of the contest and i hope somehow this will help also to spread the message of the story, that as witnesses and interpreters of the world, it's our responsability to communicate.”

The theme of refugees and forced migration was pervasive in the 2019 contest. It was interpreted and dissected by the young photographers as one of the most agonizing phenomena of the modern world. The distribution of awards on the 2019 shortlist reflects this.

In the Top News category, first place was won by a striking photo taken by a photographer from France, a Syrian by origin, Sameer Al-Doumy entitled “Escaping Conflict to Another,” which depicts a man who is cuddling a wounded girl after an air attack on Damascus, and the photo chronicle of the hopes and despair of refugees from Central America in Mexican Tijuana on the US border, entitled, “Caravana Migrante, Tijuana” by journalist Kitra Cahana (US).

The photo “Disconnection” by Justin Sullivan (South Africa) shows the intersection of despair and cold-blooded rationality: an African elephant poached for ivory in northern Botswana. It was voted the best single in the My Planet category. The win in the series category was awarded to “My Yakutia.” The photographer, Alexei Vasilyev from Russia, conveyed the visual narrative of his calm and quiet homeland.

Photojournalists from France and Bangladesh won in the category, Portrait. A Hero of Our Time. A photo by Francis Rousseau, “The Women of Arugam Bay,” won in singles. The alarming theme of women’s struggle for freedom through peaceful means stands behind the exotic beauty of the women amidst a tropical idyll Sri Lanka. The series was won by Mushfiqul Alam from Bangladesh with “Tale of the Tormented.” These photos are laconic and appear more tragic for this reason. He portrayed Rohingya women that have been victims of violence.In 2019, the Stenin contest included the category “Inspiration” for the first time. The black and white photo “Mesmerized” by Andrea Alai, Italy, was voted the best. He depicted Yasa, a 9-year-old girl from Donetsk (Ukraine) who suffers from Crouzon Syndrome, a grievous congenital disease.
The full list of prize winners will be published on the website stenincontest.com.

The ceremony was followed by the opening of an exhibition of the winning photos that will run from September 11 through September 29. Admission will be free during regular hours of the exhibition complex at the State Historical Museum. An AR Virtual Guide for over 20 photos has been made for the 2019 exhibition. It includes video greetings from the photographers, descriptions of the subject matter and the background of the photos. To access the AR Virtual Guide, upload the RIA.Lab application, open exhibition and point the smartphone camera at the special icon near the photo. The application is free and is available for iPhone and Android.