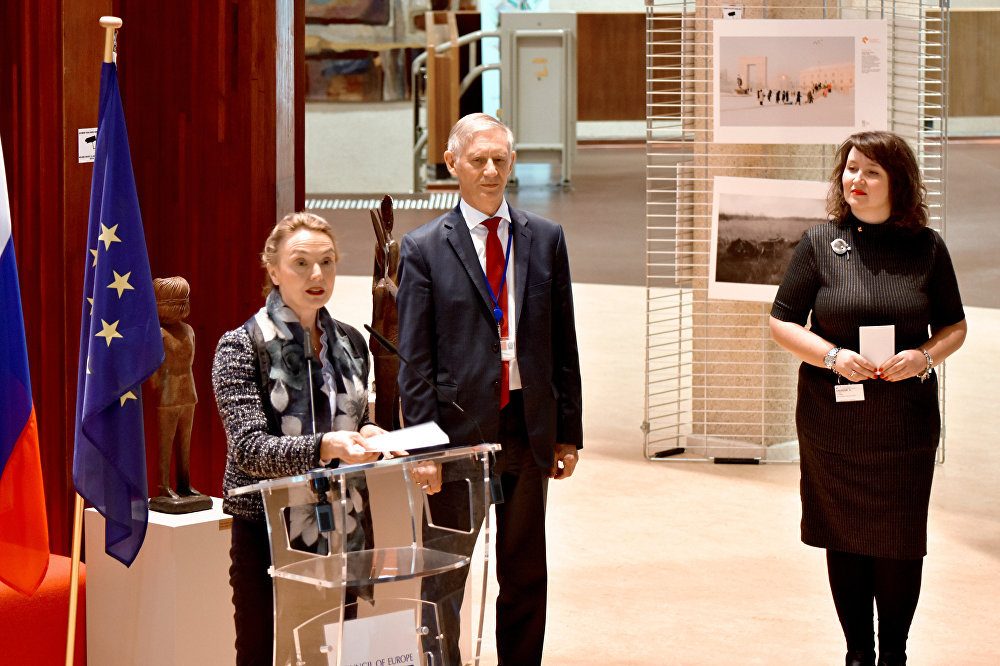 STRASBOURG, February 10 (Sputnik) — An exhibition showcasing the winning works from the 2019 Andrei Stenin International Photo Contest opened at the Council of Europe's headquarters in the French city of Strasbourg on Monday.

France is the 10th country to host the exhibition, which has already traveled to Russia, Hungary, South Africa, the US, India, Italy, Spain, Turkey and Argentina. The opening ceremony featured speeches by Council of Europe Secretary General Marija Pejcinovic Buric, Russia's Permanent Representative to the organization, Ivan Soltanovsky, and curator of the photo contest Oksana Oleinik. The exhibition will be on display until February 14.

"Each photo shows a human story. Some photos are funny, others are very serious, others are tragic. The job of a journalist is to inform us about various aspects of life. I believe that the works of the winners show things that we talk about a lot, but sometimes we do not see them in the same way as they [photojournalists] see it," Soltanovsky said at the opening.

He added that the exhibition reminded people of the price that, unfortunately, many journalists had to pay for their professionalism.

Buric, in turn, noted the high quality of the photos presented in the exhibition, and how this showed the great talent of young photojournalists who opened up new prospects for their profession.

According to Oleinik, the number of participants in the contest increases every year, with organizers last year receiving 6,000 submissions from 80 countries. The exhibition of winning photos features about 30 works by photojournalists from Russia, Germany, France, Egypt and other countries.

"The main goal of journalism and photojournalism is to tell the truth. This was the professional creed of Andrei Stenin," Oleinik added.

Andrei Stenin, who worked for Rossiya Segodnya International News Agency, was killed in eastern Ukraine in 2014. The photo contest is organized by the news agency under the aegis of UNESCO in memory of the Russian photojournalist. Its first edition was in December 2014.