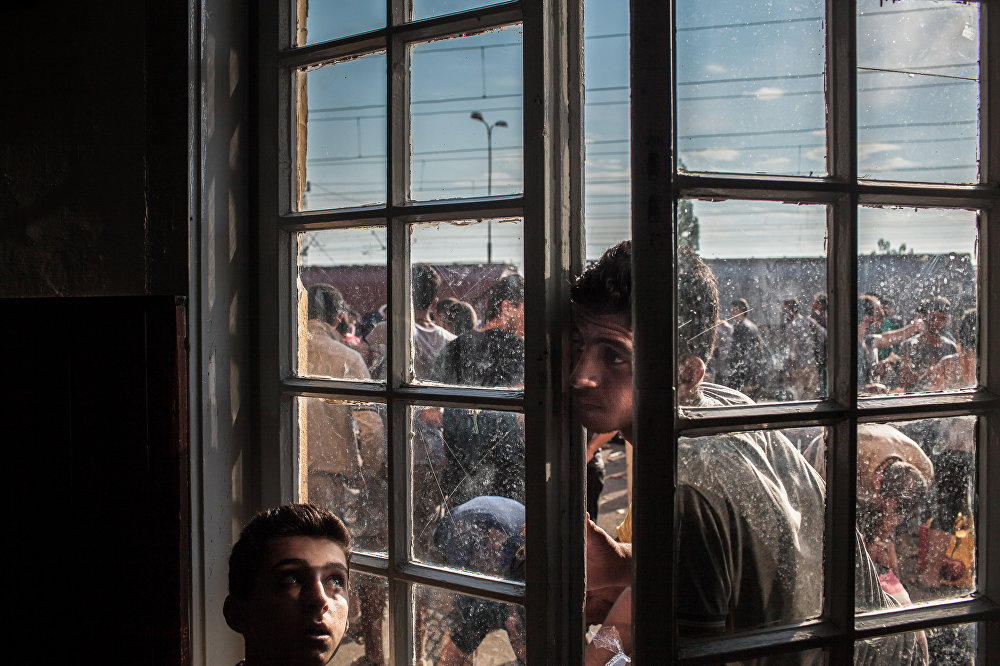 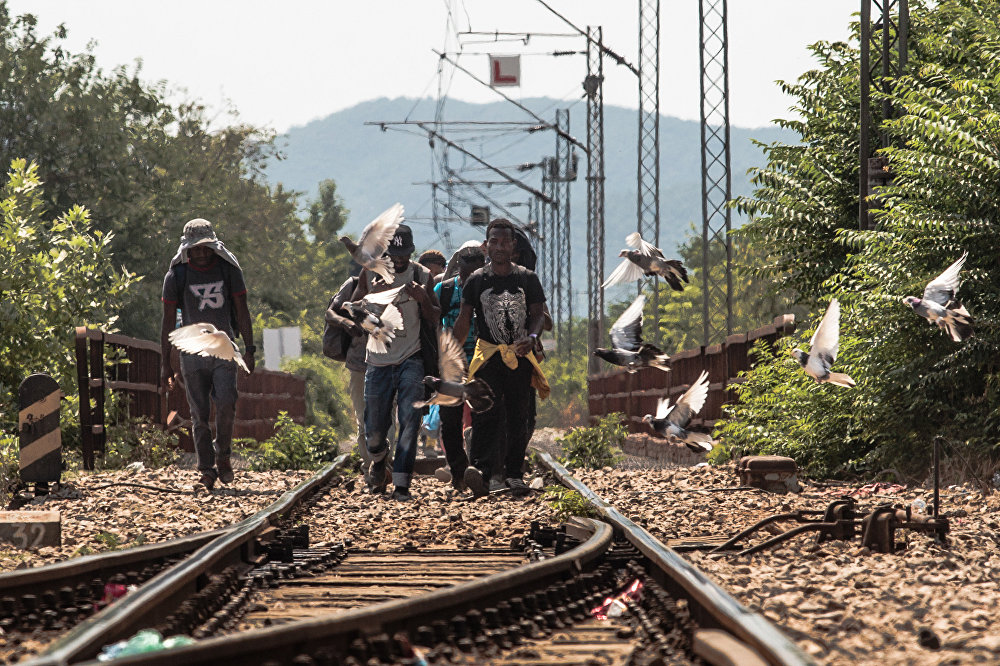 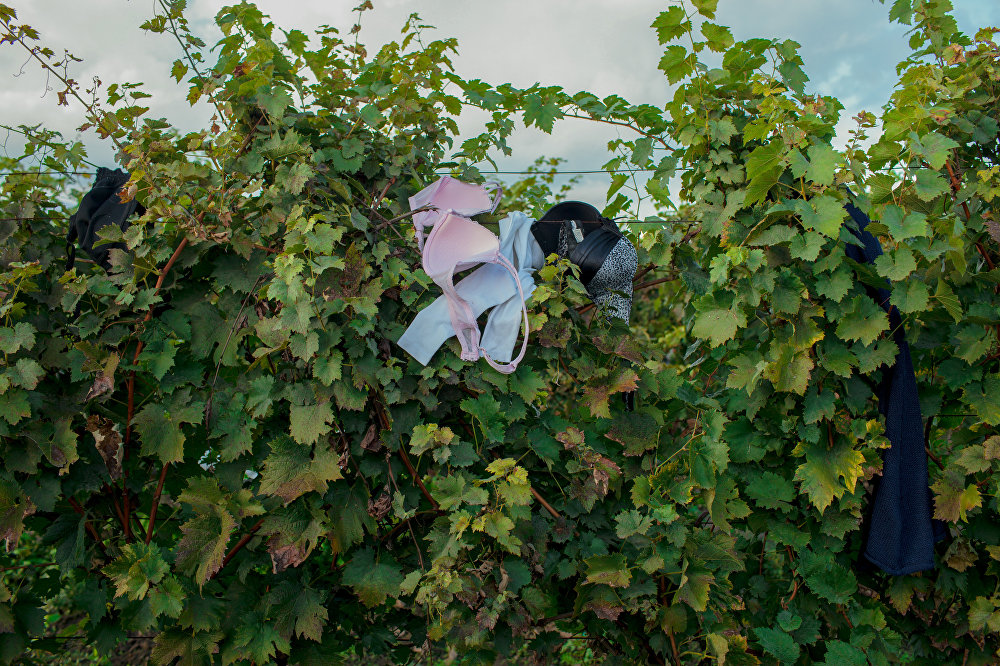 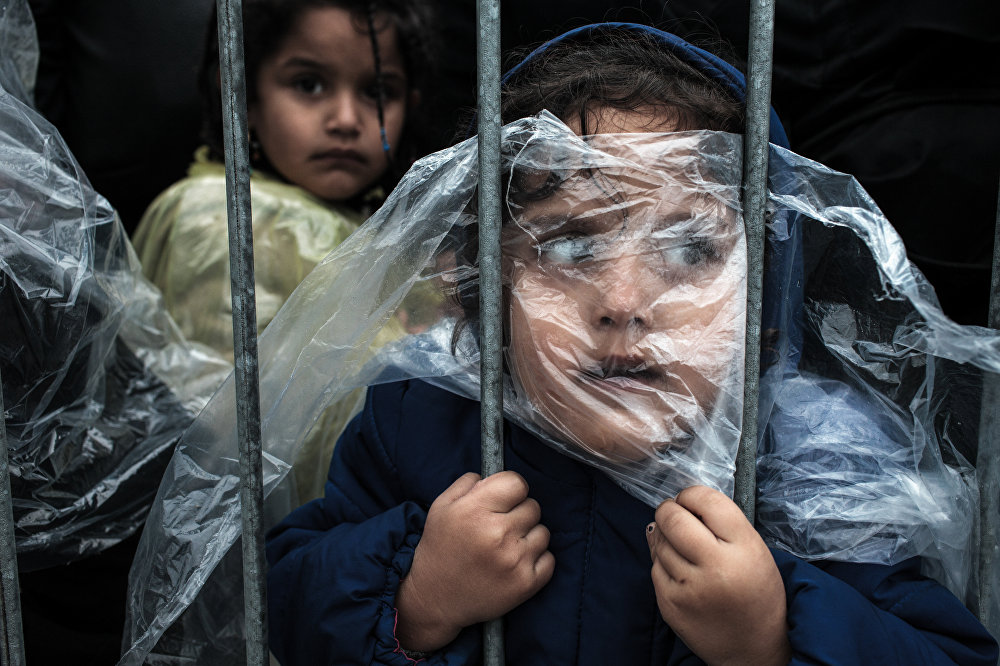 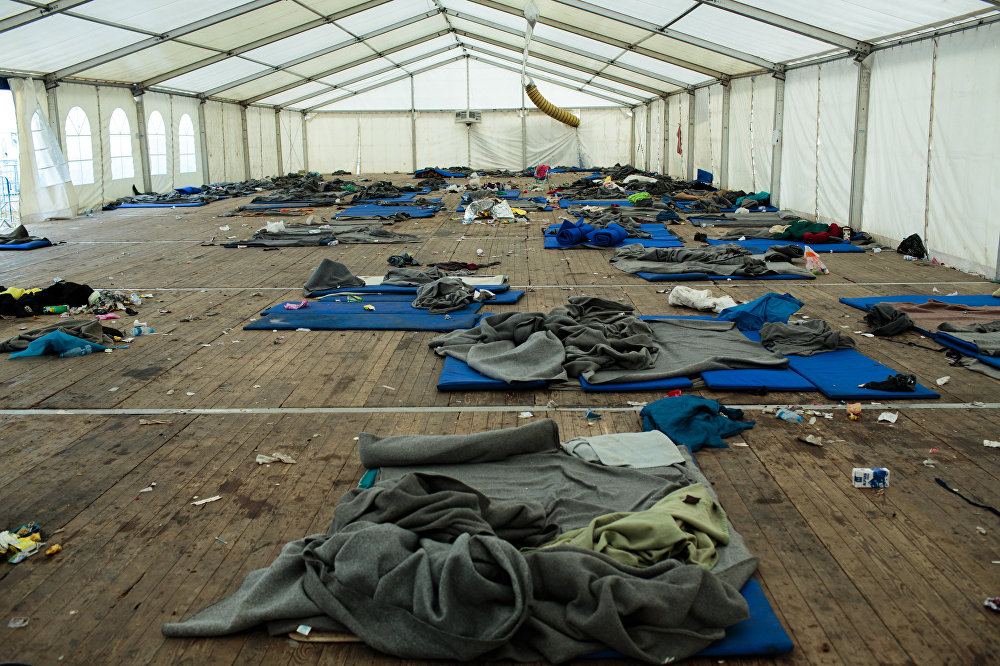 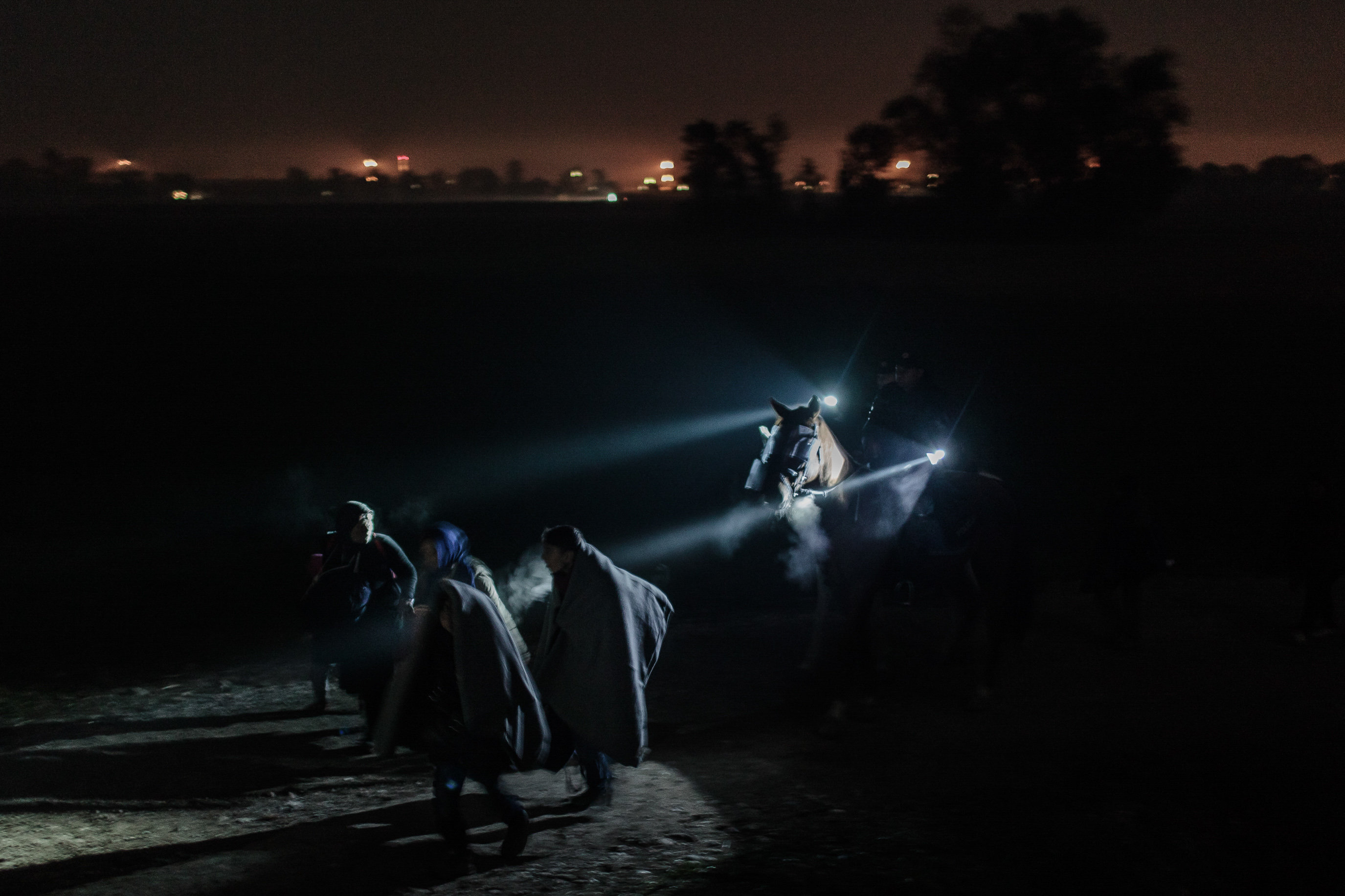 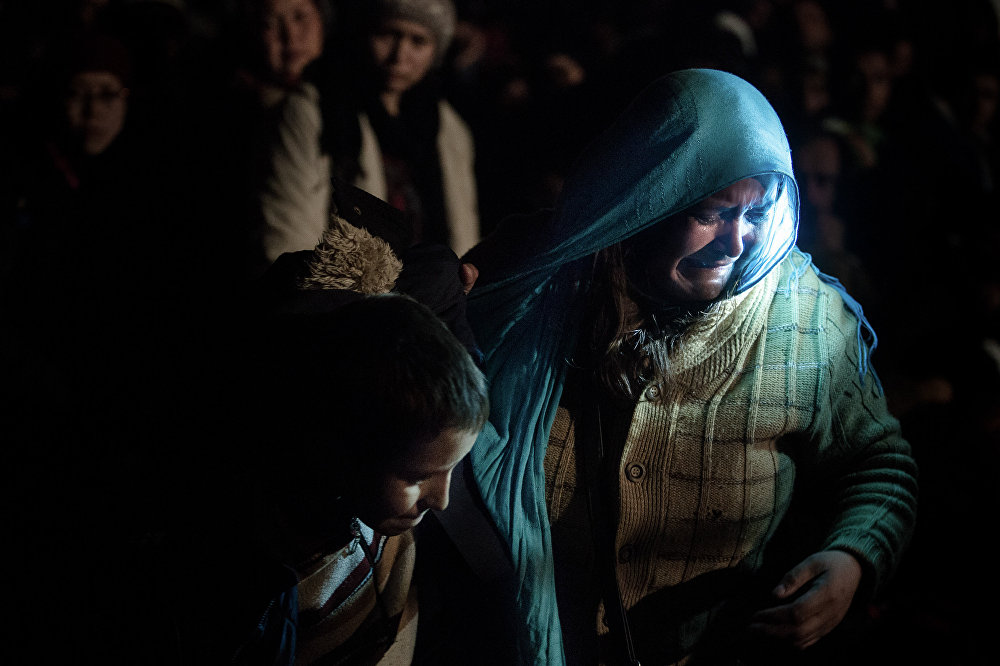 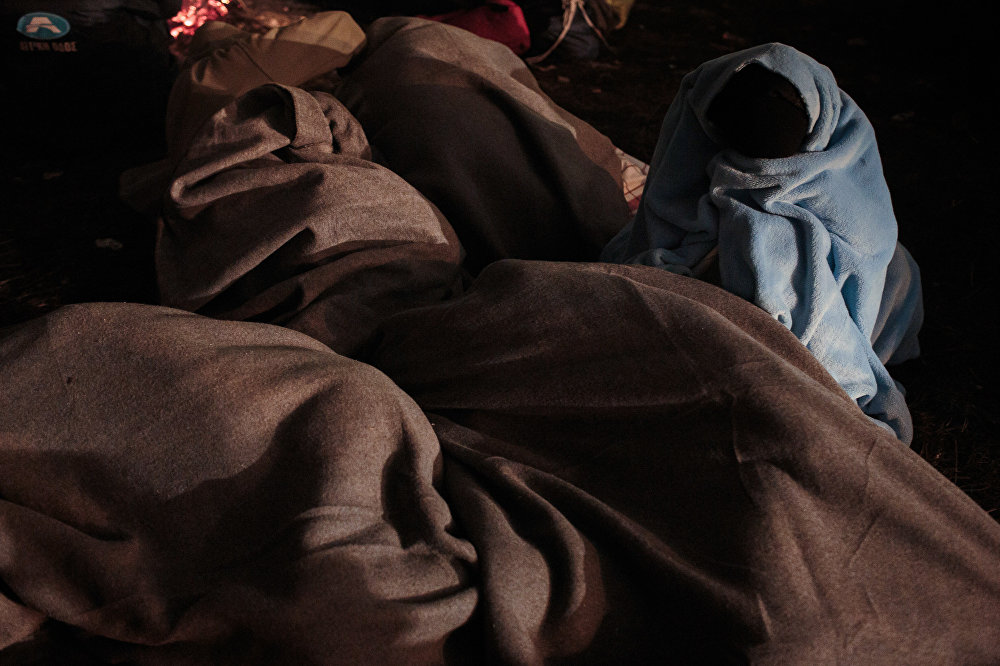 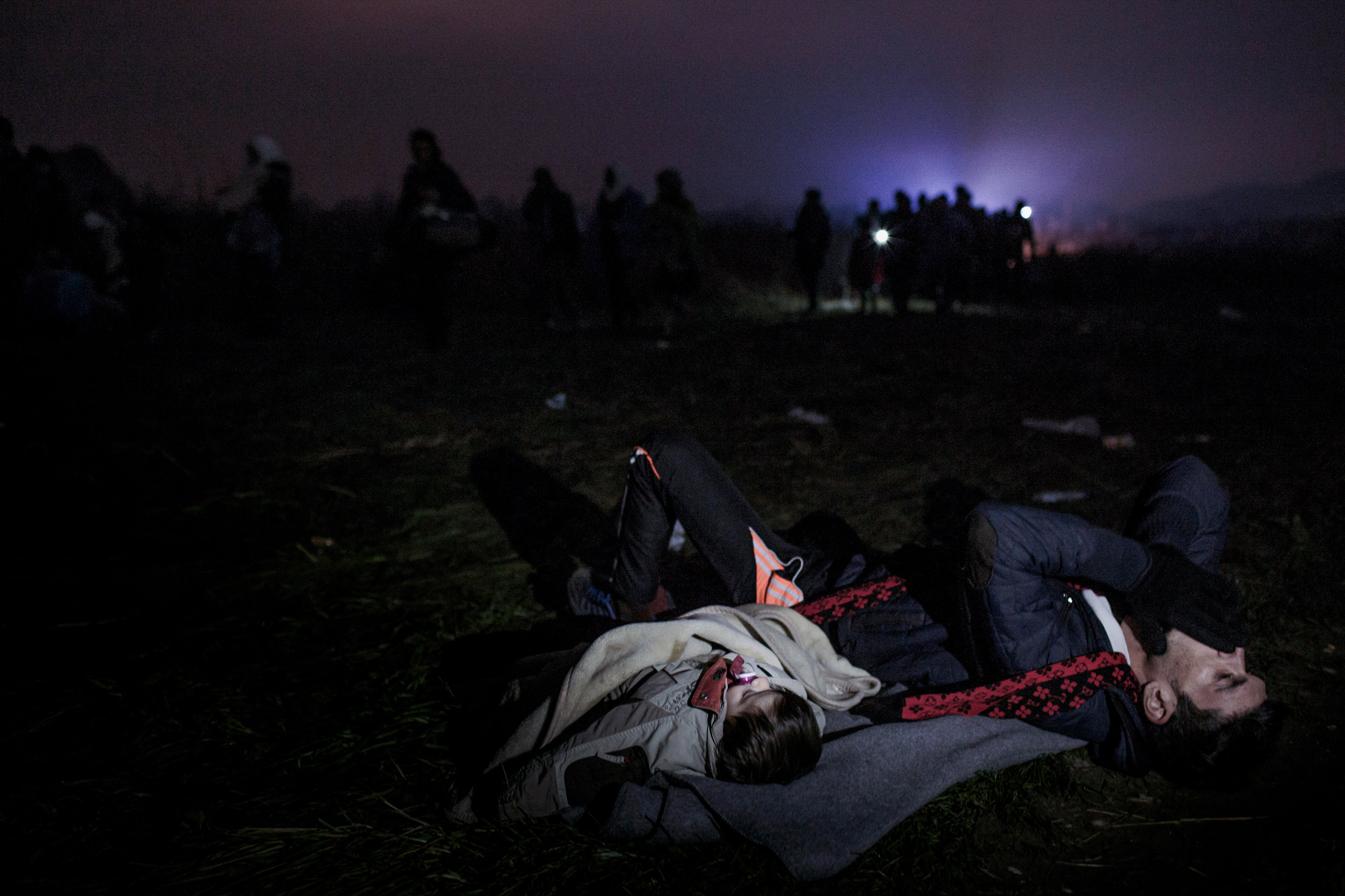 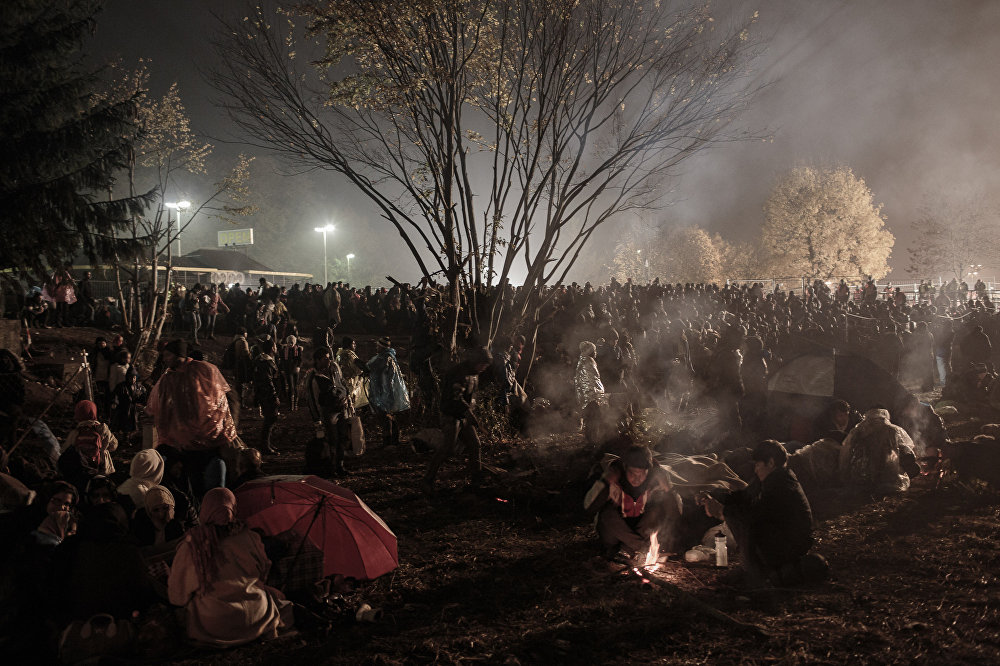 Young asylum seeker is looking through the window of Gevgelia train station (Macedonia), while waiting for the train heading towards Serbia.
Group of asylum seekers who crossed to Macedonia from Greece follow the lead of rail road tracks heading towards Gevgelia train station, from where they proceed towards Serbia and the countries of the European Union.
A forgotten bra hangs on a wine yard, which serves as a visual isolation to refugees and asylum seekers in need of a toilet or a changing room as they cross into Croatia from Serbia.
Child refugee covered with raincoat waits in line to get registered in a refugee registration camp in Presevo. Most of the refugees who crossed Serbia’s border try to continue their route towards Hungary, Croatia, Slovenia and other countries of the European Union.
Tent is left empty after a group of asylum seekers and refugees has left the camp in Dobova, Slovenia, when the Slovenian police registered them before they proceeded towards the border with Austria.
Refugees are marching towards the registration center in Brezice, Slovenia, at night. This the night air temperature has dropped to five degrees Celsius. The Slovenian police provides escort for the refugees on their 8 kilometers long road from Rigonce to the center.
Refugee mother cries in frustration after she stood with her child in line for at least the whole day, stranded at the buffer zone at the border with Austria. There was no humanitarian support, food, or medicine provided for those in need.
Group of asylum seekers is trying to keep warm during a cold night as they await to reach Austira at Sentilj border crossing.
Khalil, a Kurd from Syria, has lost sight of his family somewhere among that colossal group of people. In absolute desperation, he had no choice but to lay down on the ground with his baby, shouting the names of his loved ones as he awaits for them during the eight kilometers walk towards the registration center.
Refugees and asylum seekers burn camp fires as night gets cold while they wait stranded in the buffer zone to cross the border with Austria in Sentilj, Slovenia. There was no humanitarian support, food, or medicine provided for those in need.

The Balkan Route documents the plight of migrants through the Balkans, to reach safety and receive an asylum status in one of the countries of the European Union. The Balkan countries were not prepared for a crisis of this dimension, often resembling a scenery from the Biblical Exodus. 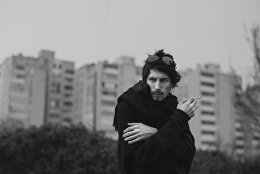 Born in 1986 in Slovenia. A freelance photographer, working regularly with a number of Slovenian magazines and newspapers. Concentrates on documentary photo projects. Graduated from the Ljubljana Multimedia Academy, and has recently spent a lot of time working in the Gaza Strip. For him, photography is a powerful tool for showing and spreading the truth. In his work he pays special attention to the humanitarian dimension of armed conflicts.