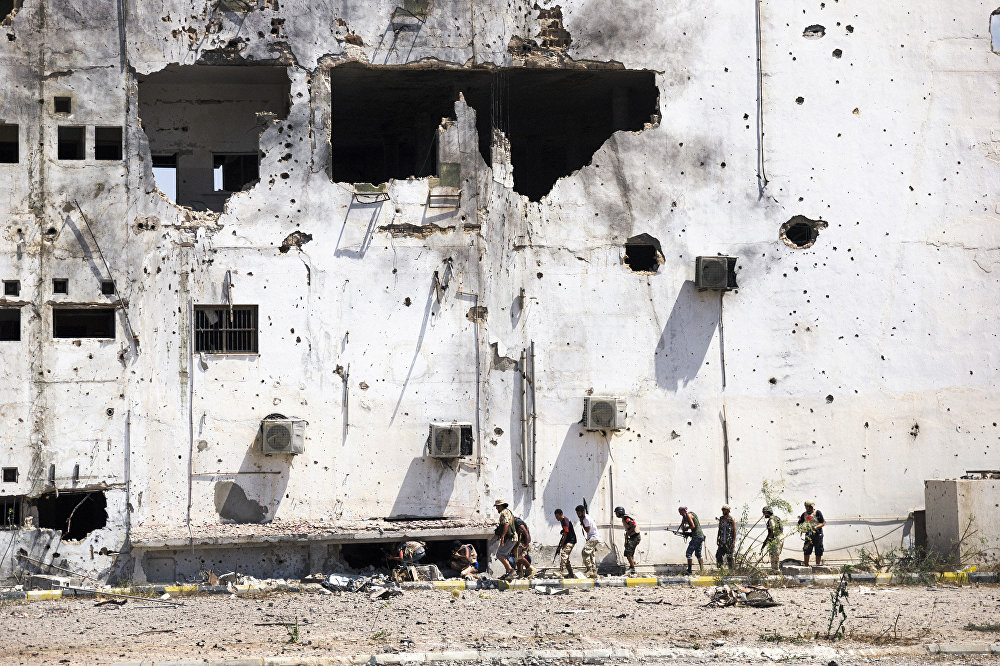 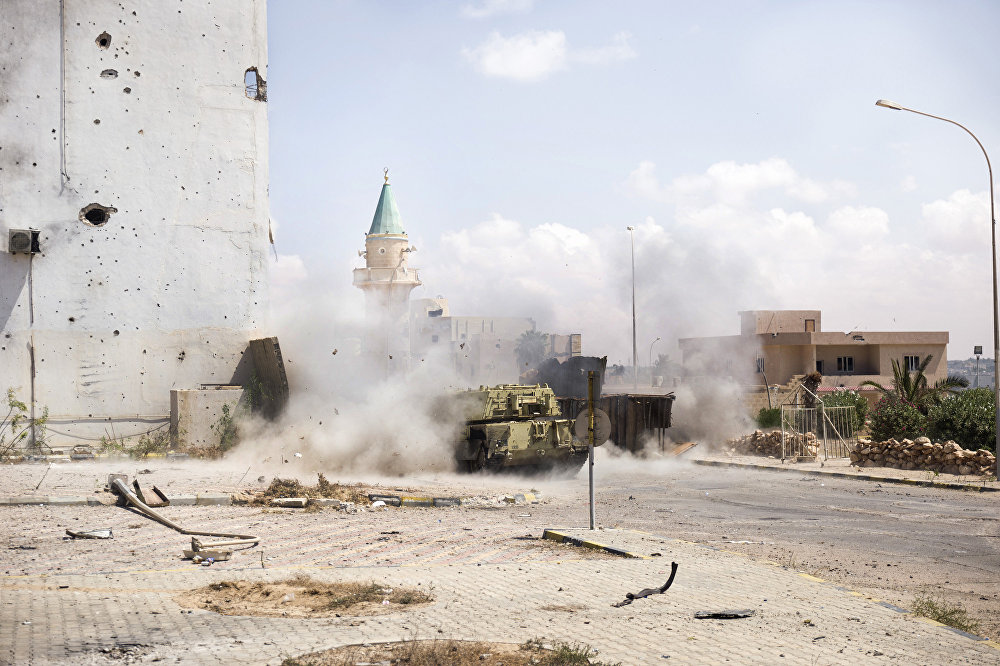 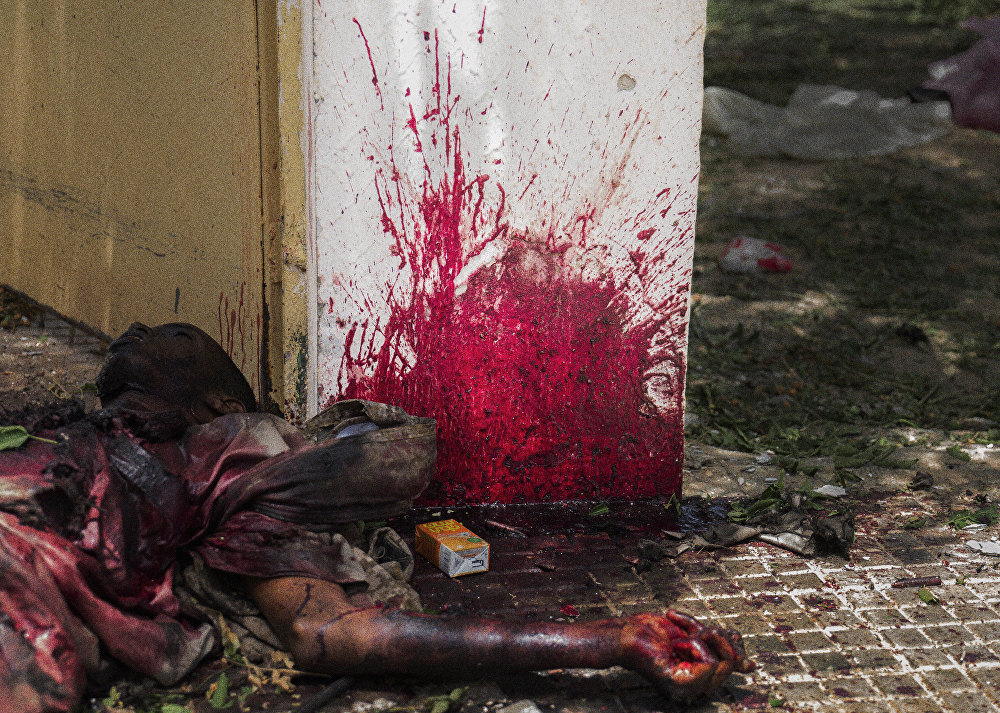 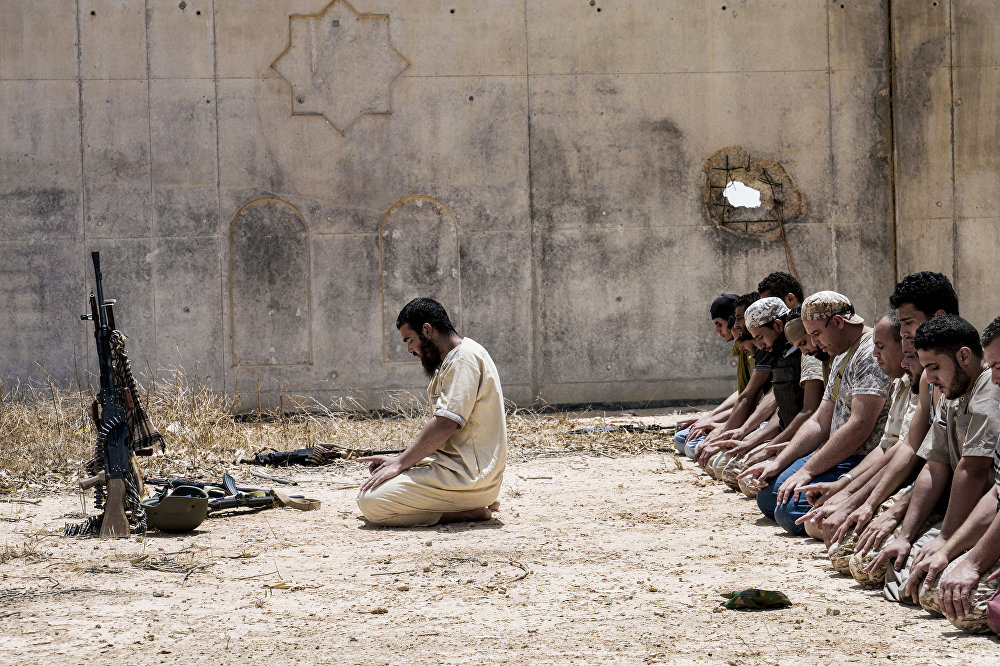 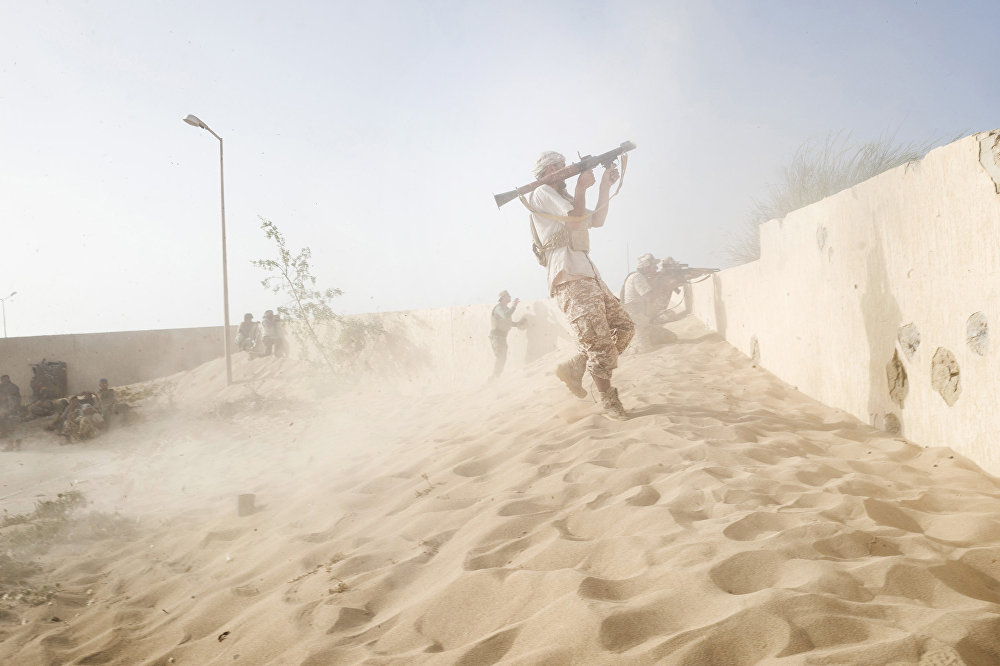 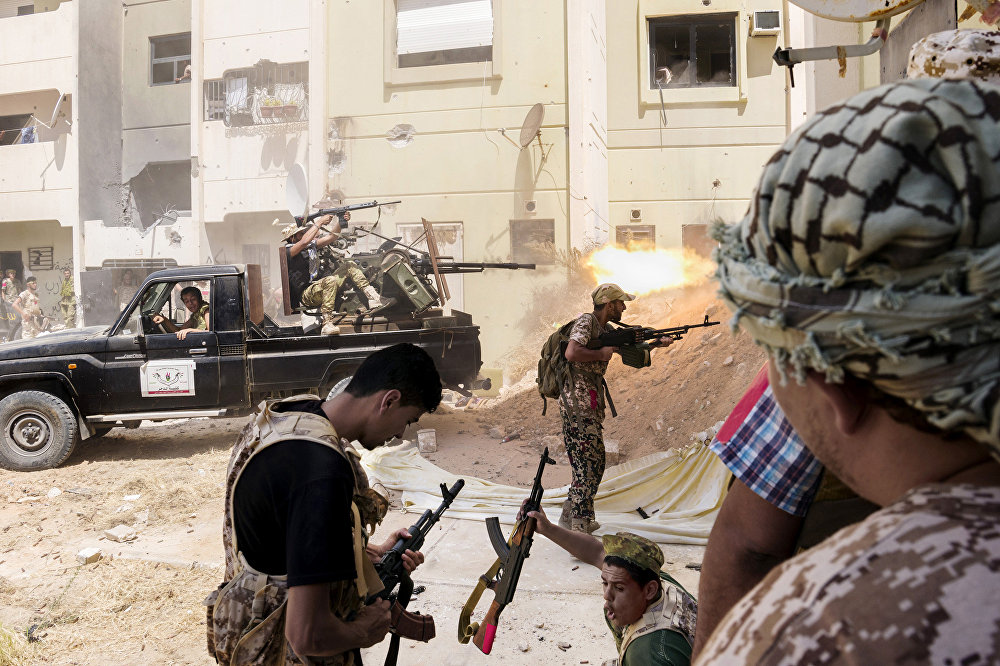 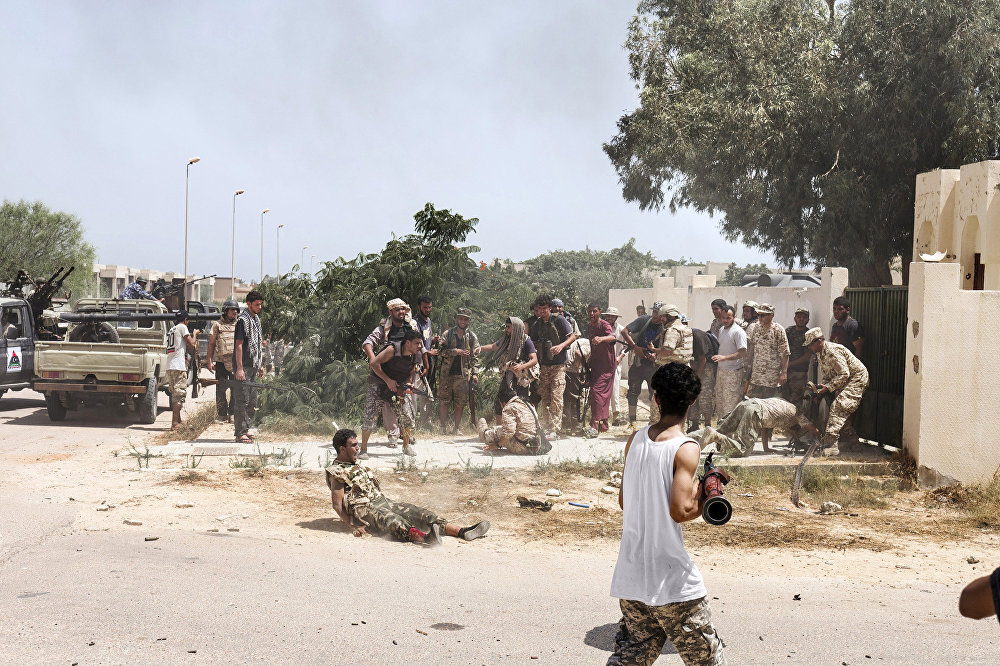 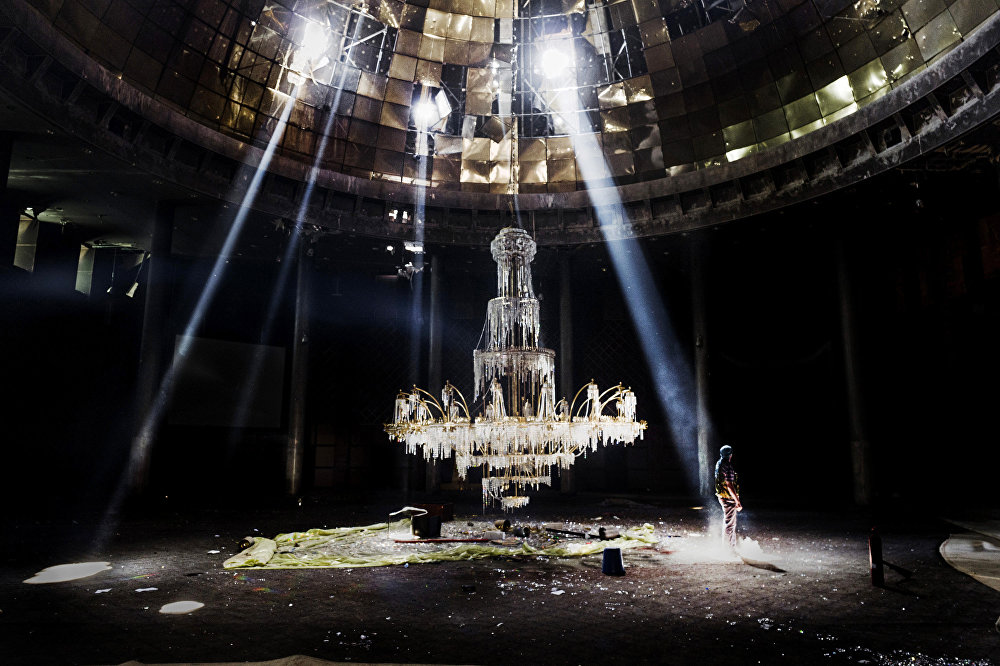 LIBYA, SIRTE, 03/09/2016.
Soldiers from the Misurata brigade, who back the new government and Fāyez Muṣṭafā al-Sarrāj’s National Accord, as they enter the Central Bank of Libya, Sirte branch, under fire from Isis militants (or Daesh, the arabic acronym for The Islamic State of Isis od Iraq and the Levant)
LIBYA, SIRTE, 11/07/2016.
The 700 district. A kitchen destroyed by a military tank.
LIBYA, SIRTE, 03/09/2016.
After the firing and explosion of a "dogma" (without casualities) by Isis militants, a military tank fires on a square near the Central Bank in the first district.
LIBYA, SIRTE, 01/07/2016. An Isis sniper gets shot by Misurata brigade during a violent firefight. Those faithful to the Islamic state wear a belt attached to a live grenade. Many of these explosive belts were found abandoned during a subsequent sweep of the area. Militants were found the next day hiding in an apartment.
LIBYA, SIRTE, 01/07/2016.
Between the 700 district and the street leading to the center of Ouagadougou, some soldiers stop to pray despite the military advance in progress. Regardless of their military affiliation, all Libyan fighters believe that the only one who can decide their fate is Allah.
LIBYA, SIRTE, 21/06/2016.
West coast of Sirte city. Rebels advance to a hillside post near the coastal road of the city, an important position that manages access into the city center. A soldier shoots an RPG while his companions cover him. Many soldiers lost their lives trying to defend this strategic outpost./
LIBYA, SIRTE, 01/07/2016.
Washing off blood after dragging a wounded companion back from the front lines.
LIBYA, SIRTE, 28/08/2016.
District 3 where Misurata forces engage in a firefight trying to drive out snipers away from the city's water tank, a strategic position being one of the highest in the city.
LIBYA, SIRTE, 01/07/2016.
In the 700 District a fierce firefight of the Katiba Marsa al Cobra: three soldiers were hit by a sniper. Libyan soldiers are known throughout the region for their courage and defiance in the face of combat danger. The average age of these militants is quite small./
LIBYA, SIRTE, 01/09/2016.
A soldier walks down one of the newly liberated streets with the Libyan flag whose colors are inspired by a previous Libyan reign from 1951 to 1969 that Gaddafi dismantled. The color green symbolizes the religion of the state by which Gaddafi came to power ( The Green Book).
LIBYA, SIRTE, 25/02/2015.
The after effects of a car bomb (Dogma) in the first District: six dead and nearly 40 wounded. Car bombs are made by attaching plastic explosives to heavy arms and munitions. The idea is to scar as many people as possible thereby leaving a permanent warning to those who want to interfere with the jihad.
LIBYA, SIRTE, 01/09/2016.
Ouagadougou Conference Center. Constructed by Italian workers at the request of Gaddafi, the building was meant to be a place for dialogue among all African cultures and in turn open doors in relations between Europe and Africa. In 2011 it was used as a bunker to defend the Rais.

Sirte or death. It must mean something if the Islamic State, which for months has been fighting in the last IS bastions in Libya, uses such an arrogant name for their car bombs: dogma.

Italy
Born in 1984 in Milan. Graduated at Fine Art School, started with photography covering the news on Milan.  Over the years he has focused his attention on Middle East and conflict areas. He prefers long-term projects where he can develop his personal language. His work has been published in national and international daily newspapers and magazines such as New York Times, New Yorker, Newsweek, Wall Street Journal, Espresso, Repubblica, Internazionale, and Corriere Della Sera.