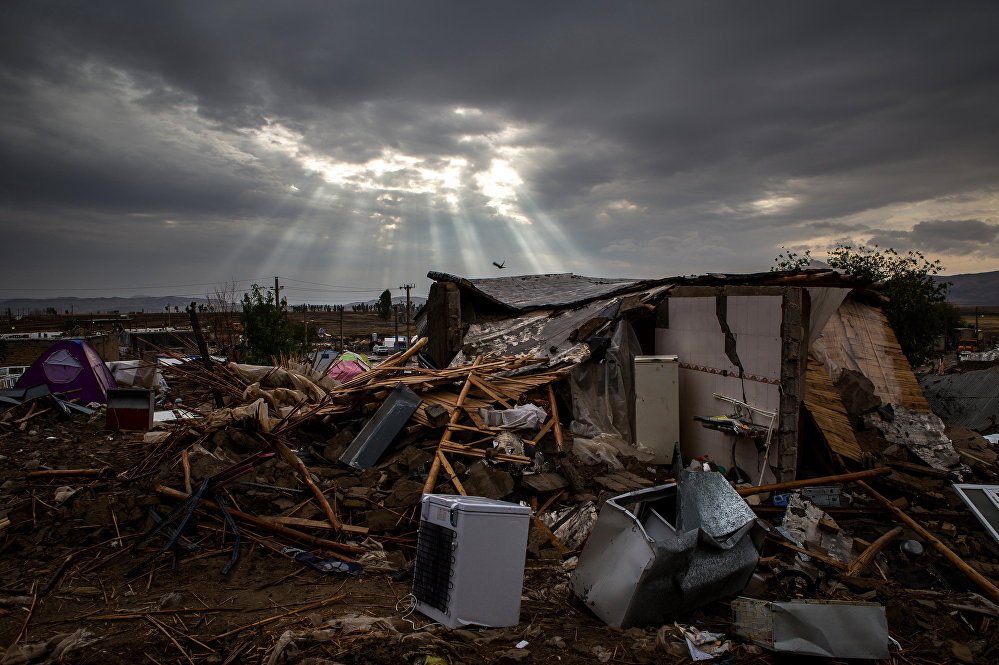 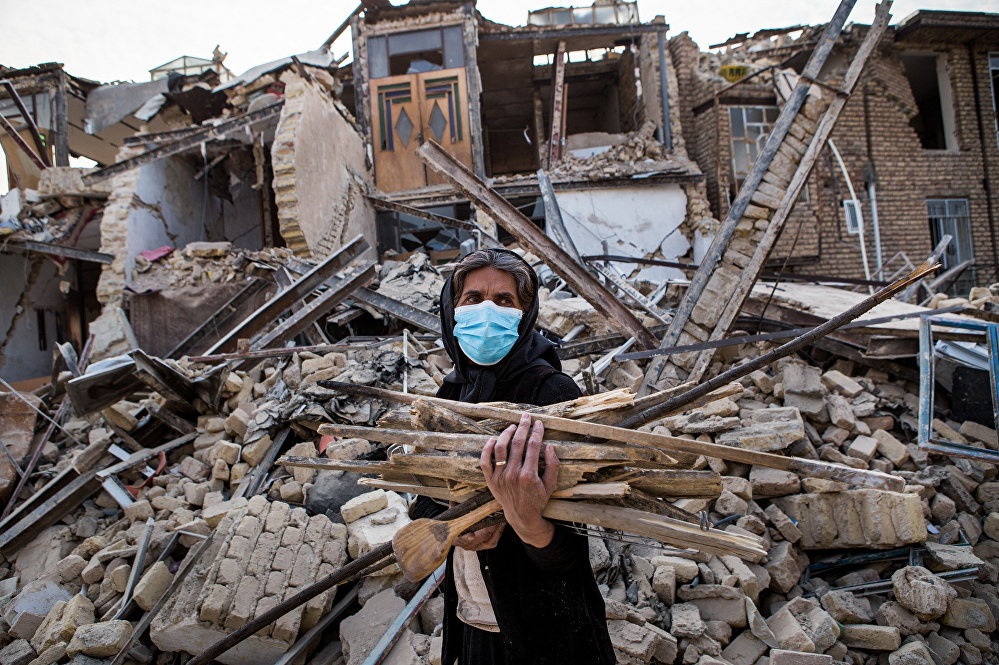 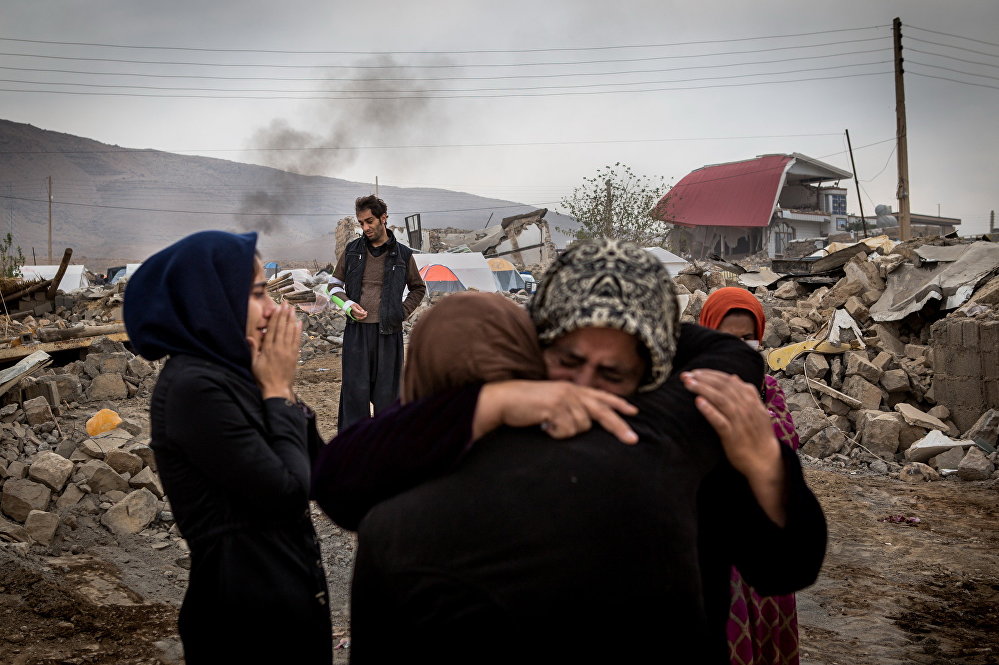 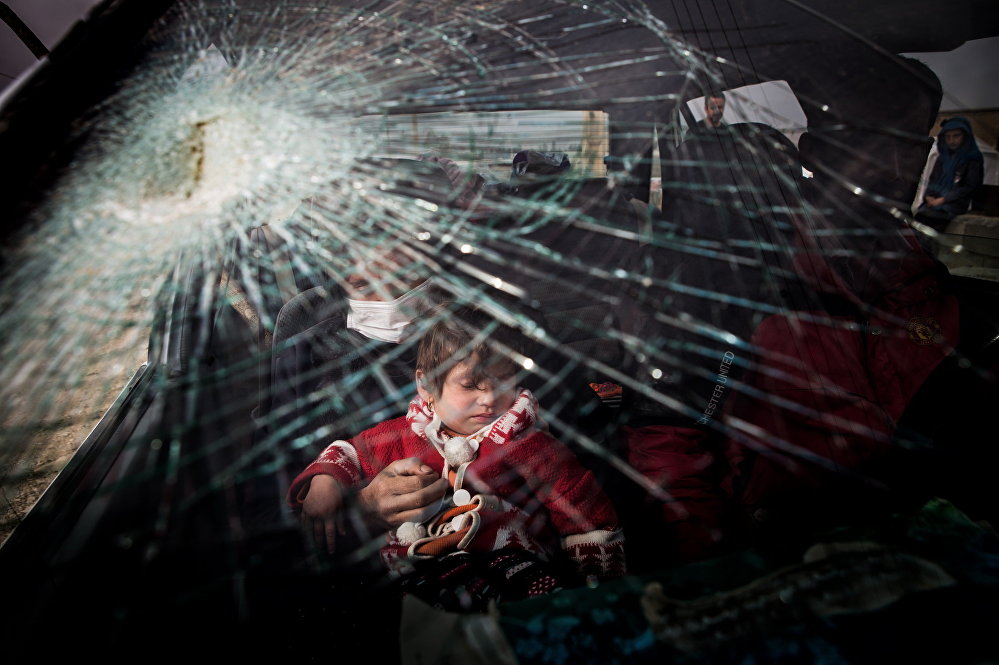 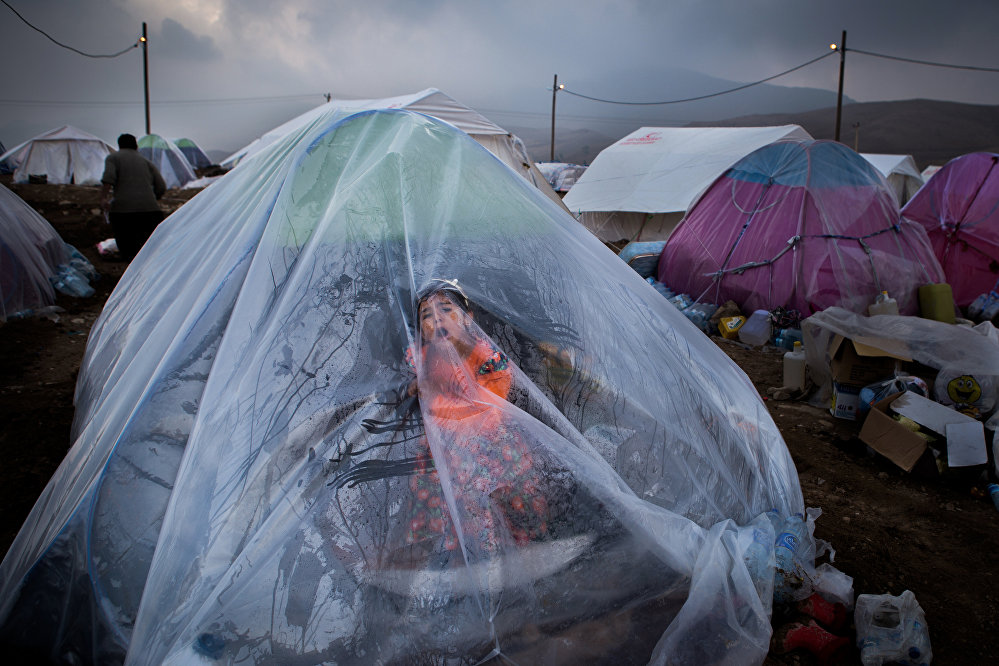 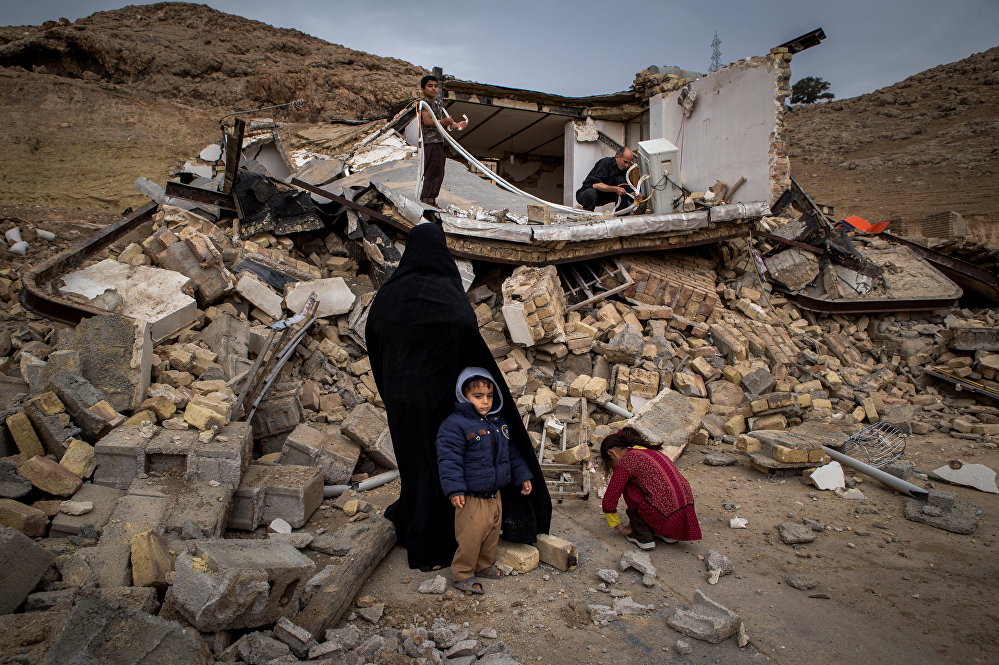 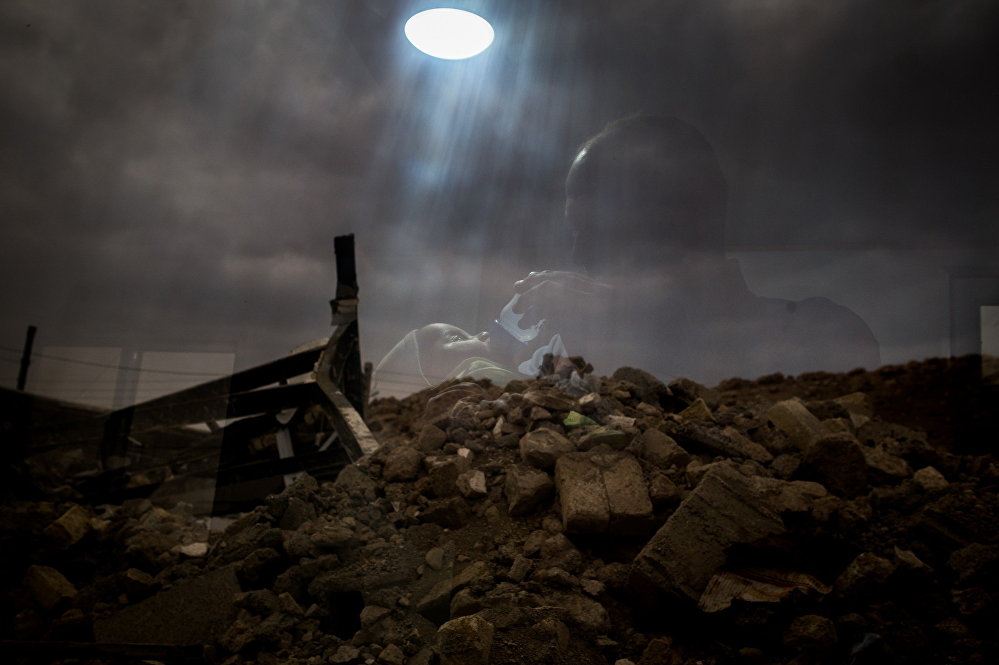 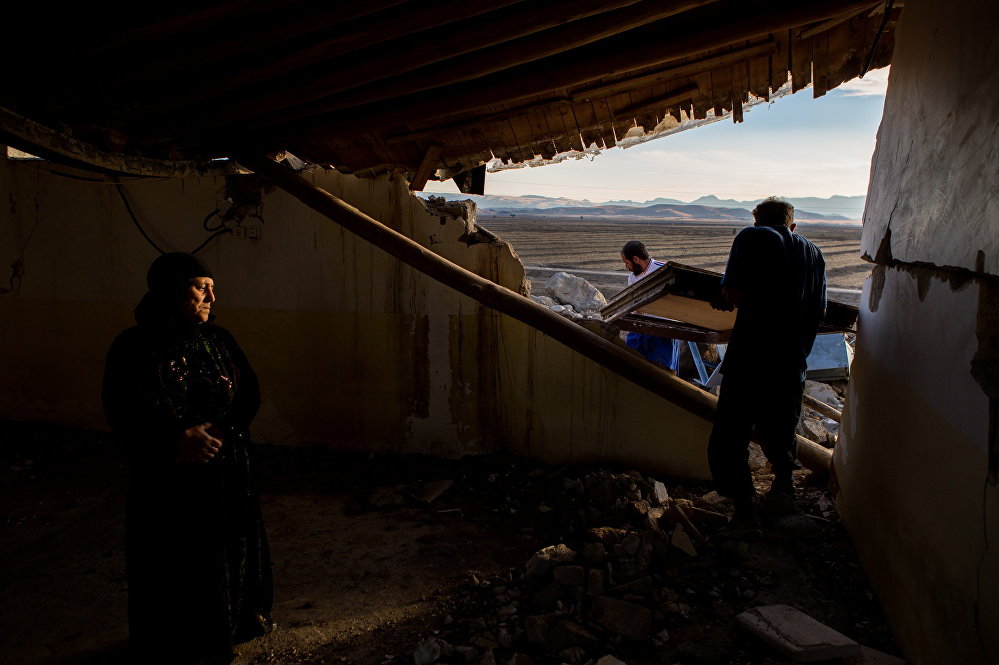 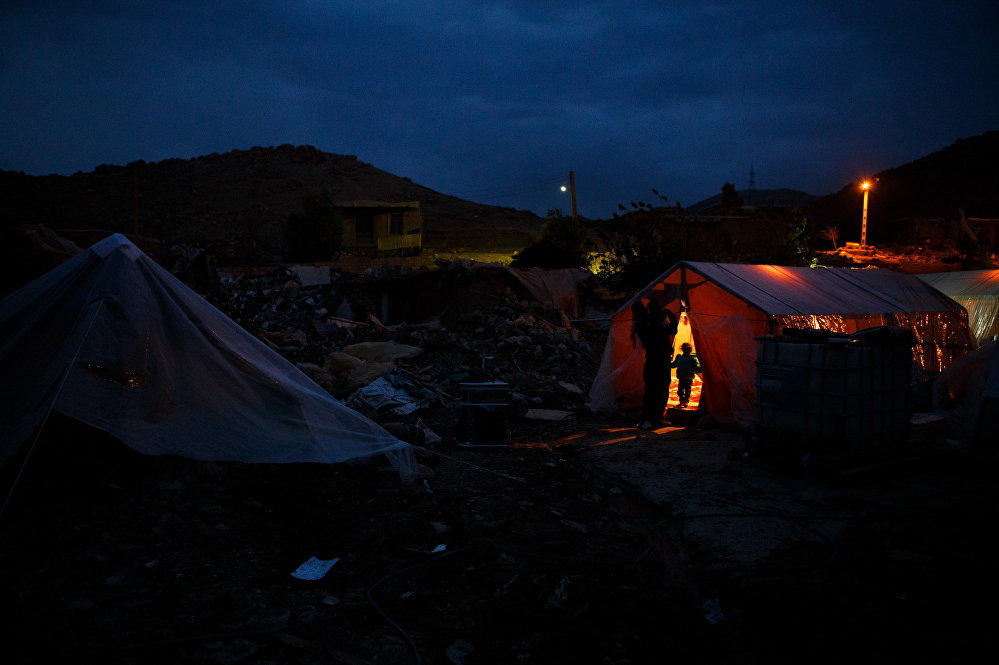 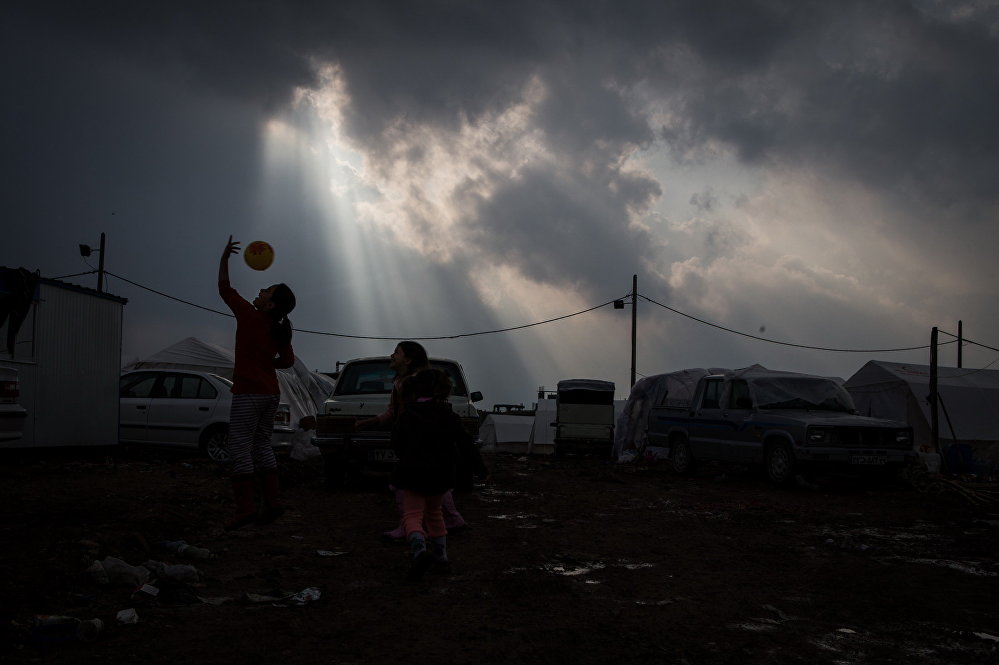 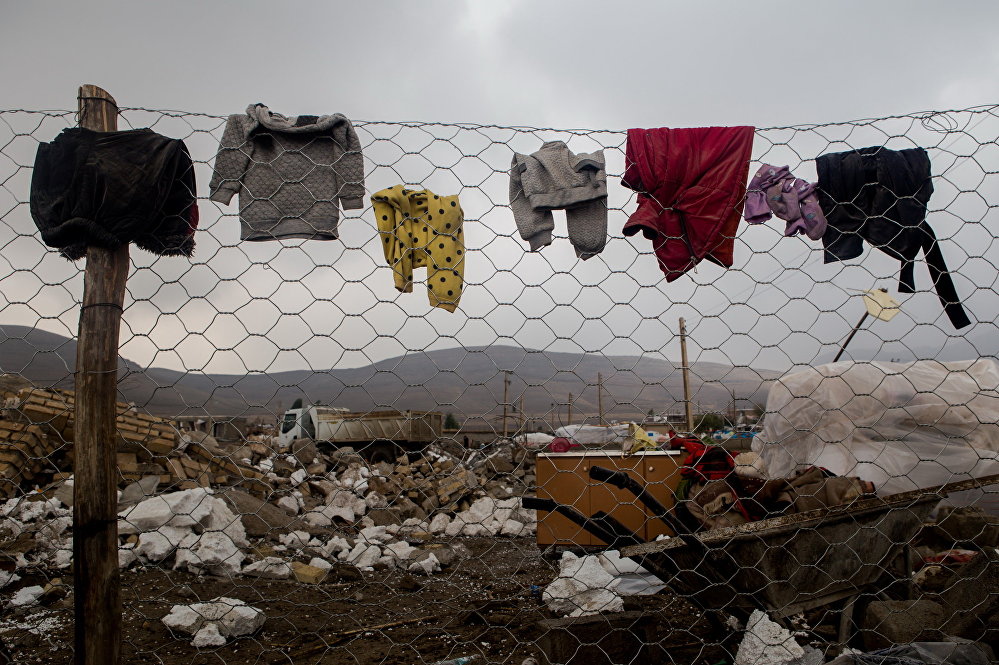 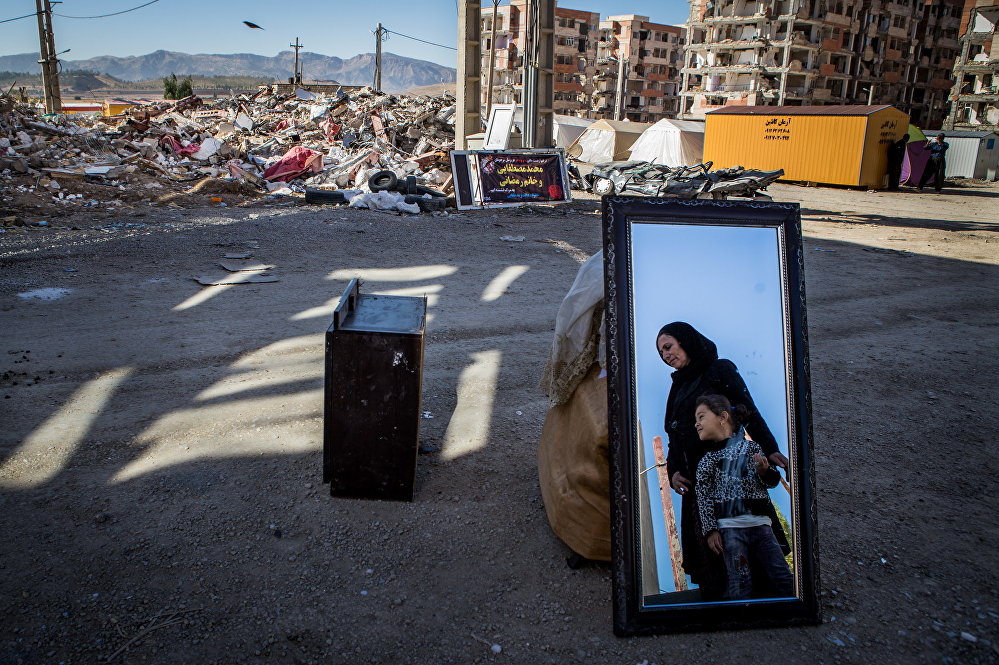 The earthquake with a moment magnitude of 7.3 occurred on Sunday, Oct. 12, 2017, near Ezgeleh, Kermanshah Province, near the Iranian-Iraqi border. The earthquake was the most devastating earthquake in 2017.
Besimeh, 43, is an earthquake survivor who lost ten of her family members to the earthquake. She collects pieces of wood in Fuladi region. Most of the homes in this region were fully devastated by the earthquake.
A man who has lost her wife stands alongside a few women next to their demolished homes in Kuik Village. The village was fully destroyed.
The members of a family sit inside their car outside their house that was destroyed in the 7.3 magnitude earthquake in Sarpol-e Zahab, Kermanshah, Iran.
A young girl looks out at the ruins of her home from a tent in Emam Abbas-e Sofla village, one of the villages of Sarpol-e Zahab, which was destroyed. After the night of the earthquake, most children were coping with fear, doubt, and nightmares of the disaster
Members of a family collect the remains of their possessions from their demolished house.
Farhad from Tapani Village, Sarpol-e Zahab who has lost his wife and two of his three children in the earthquake. His wife lost her life when she went inside to save her children. He watches over his only surviving child, and believes that this child is the only thing restoring his hope in life.
A middle aged woman collects what remains of their house. Most of the people say that they had built their homes and earned their possessions after 30 years of agricultural work. Their house came falling down on them and was destroyed in a matter of seconds.
NO CAPTION
Children who have survived the earthquake in Sarpol-e Zahab play together.
NO CAPTION
Members of a family collect the remains of their possessions from their demolished house.

Iran is one of the most earthquake-prone countries in the world, and earthquakes threaten most regions across Iran. More than 80% of cities in Iran are under the threat of earthquake. Iran also stands high on the list of countries with the most number of earthquake victims. On the Sunday night of Oct. 12, 2017, a powerful 7.3 magnitude earthquake hit Ezgeleh City in Kermanshah Province near the Iranian-Iraqi border. 569 were killed, nearly 10 thousand were injured, and more than 30 thousand houses were destroyed in Ezgeleh, Sarpol-e Zahab, Salas-e Babajani, and Ghasreshirin cities, and the nearby villages. The earthquake spawned nearly 1557 aftershocks. It occurred at a depth of 11 km from Ezgeleh, and was felt throughout Northwest Iran due to its shallow depth and long duration. This earthquake was the most destructive earthquake of 2017 worldwide, and was felt in southeast of Turkey, Lebanon, Qatar, Israel, United Arab Emirates, Kuwait, and north of Saudi Arabia.

When the earth begins to shake, the walls crack, they can be heard collapsing, and things are heard falling. In a matter of seconds, hundreds of homes are ruthlessly destroyed, and a huge cloud of dust covers everything. In those quick yet horrific moments, an inexplicable fear grips the people, many are injured, and many dead. Families lose their loved-ones and face the biggest challenge of their lives: homelessness. Losing one's home and shelter can cause serious mental health problems, filling the victims with rage and fear. Hopelessness becomes an inseparable part of the daily life, and it is difficult for people to accept this shock, to move on from the earthquake's destructive effects, in order to fight the unexpected problems. Gradually and strangely, however, the survivors get on with their lives and begin to rebuild their surroundings, creating a shelter for themselves and the rest of their families using the debris.

The goal I pursue through this project is to depict the lives of people in the city of Ezgeleh in Kermanshah Province, who have experienced a 7.3 magnitude earthquake. I lived with the survivors for 20 days in order to better understand their dire living conditions after the earthquake. Those who have lost one or all of their family members in a matter of seconds, and, on top of that, no longer have a place to live. I wanted to capture the people's feelings, their sadness, happiness, hopes and fears in the face of this unpredictable disaster, to illustrate the flow of life that continued uninterrupted after the earthquake despite all odds. The people that began to rebuild their new life at such hard times and with little means; people that despite all the injuries and damages move toward their aspirations hoping to build a new life. 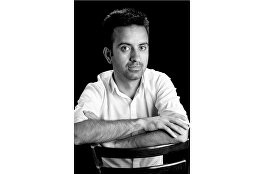