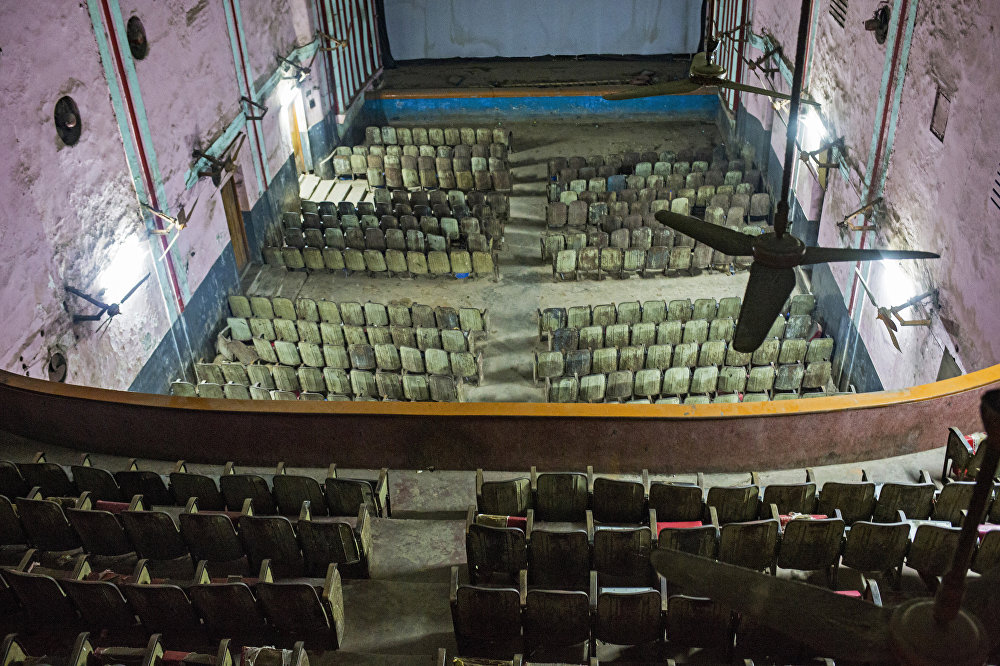 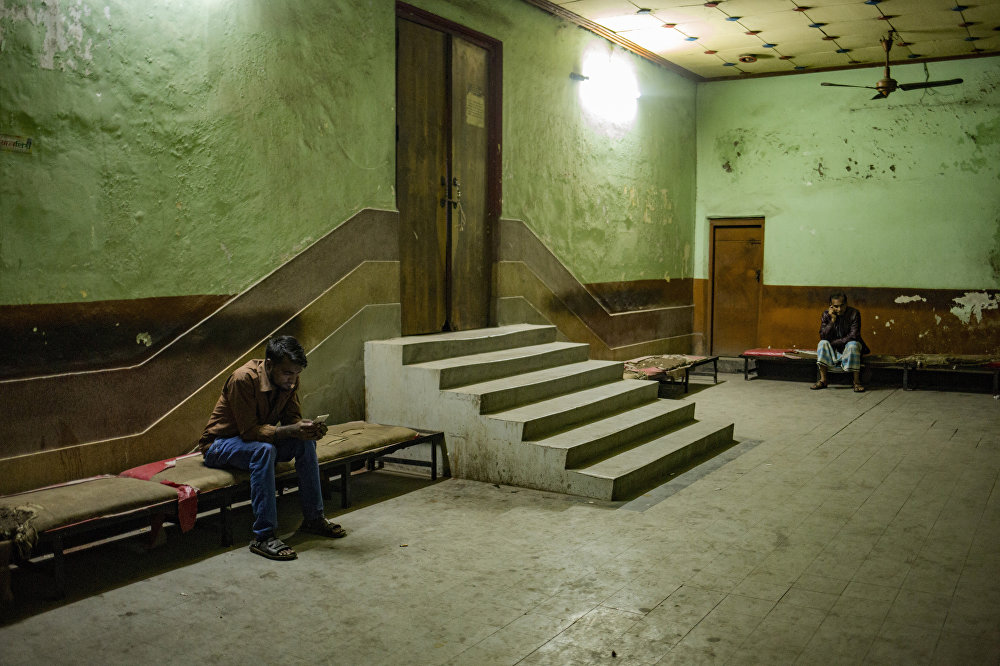 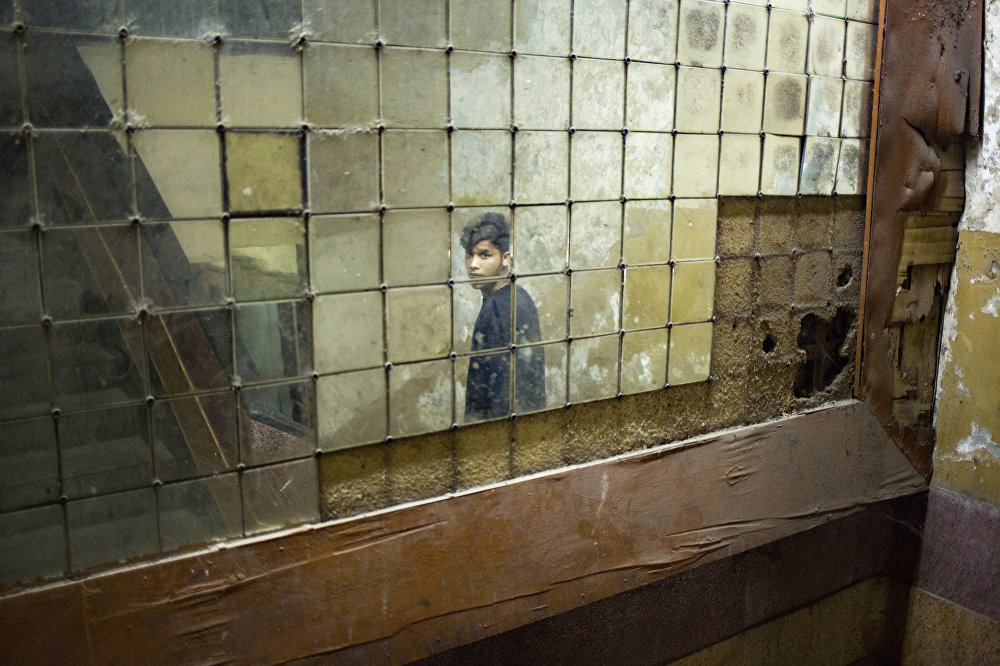 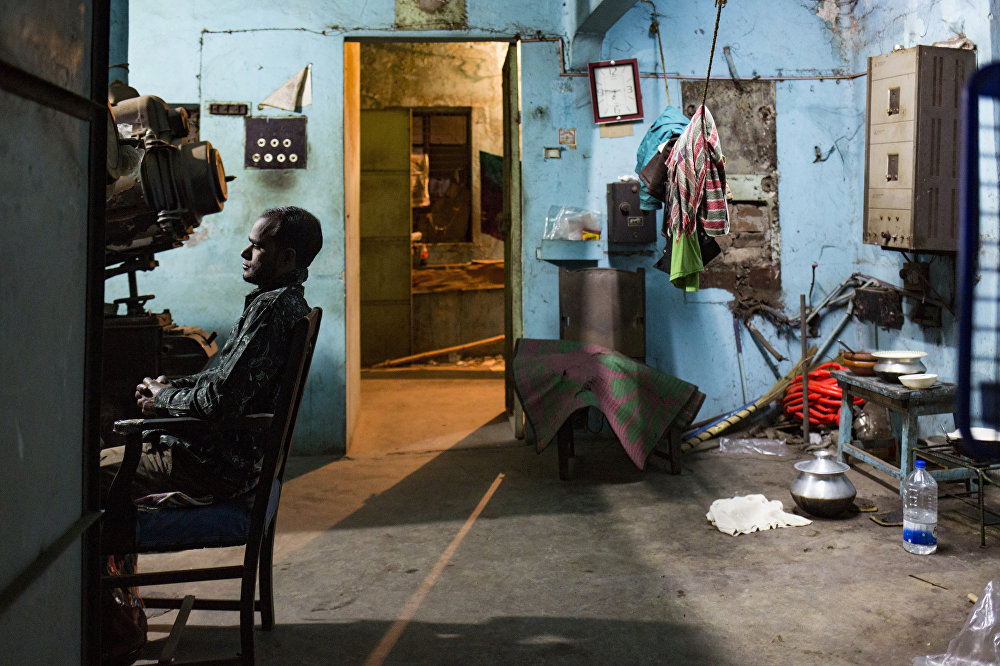 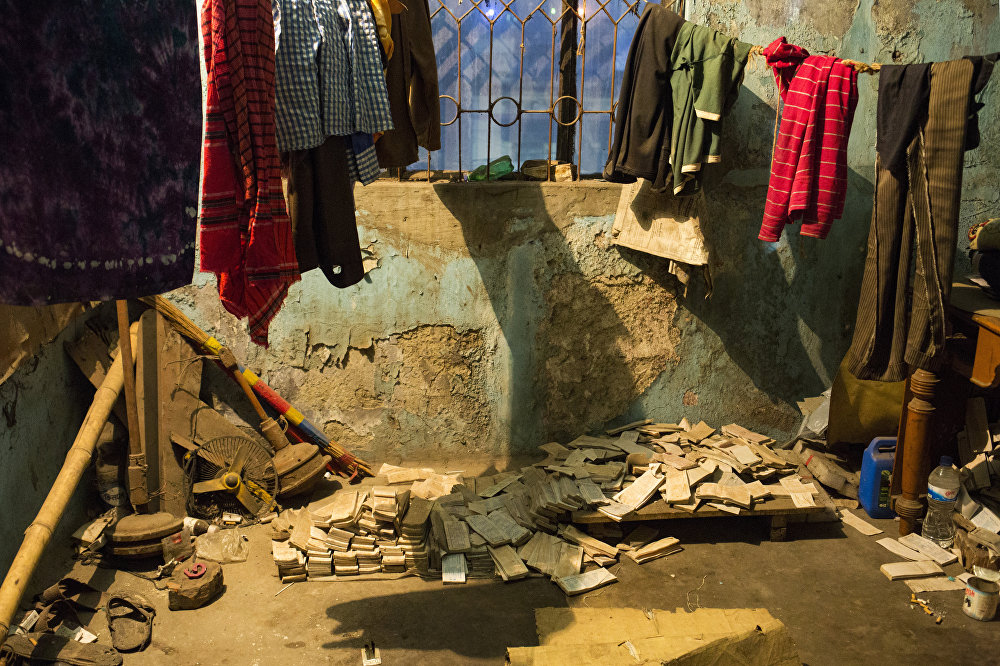 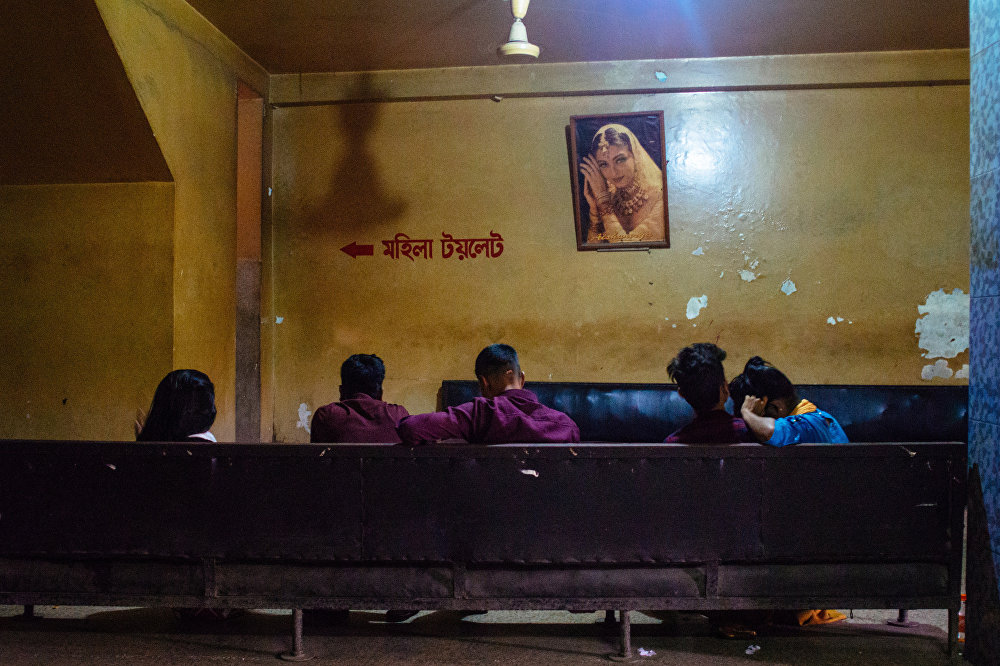 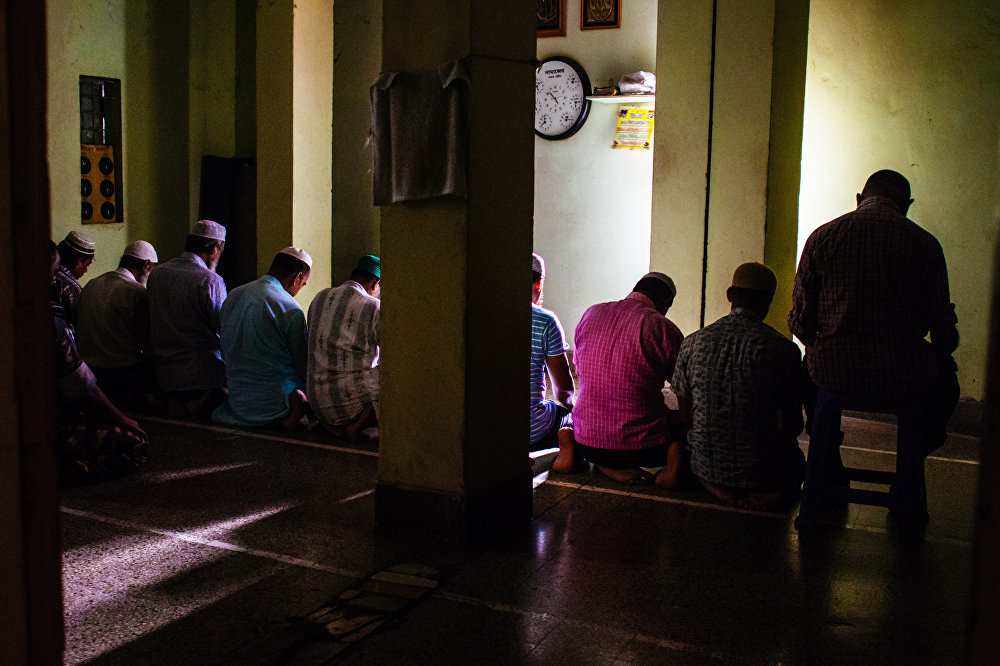 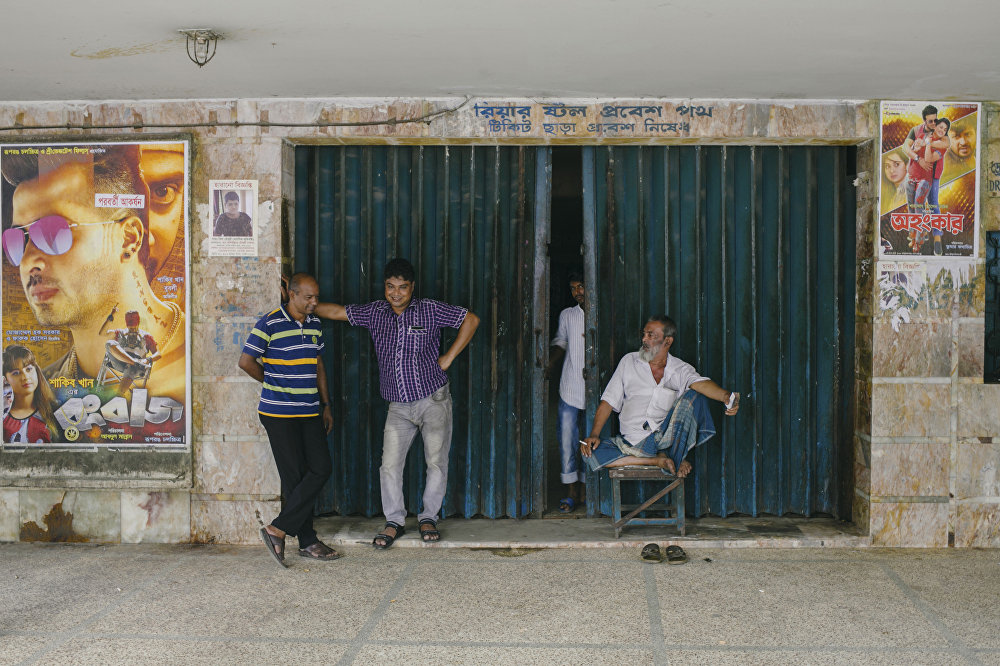 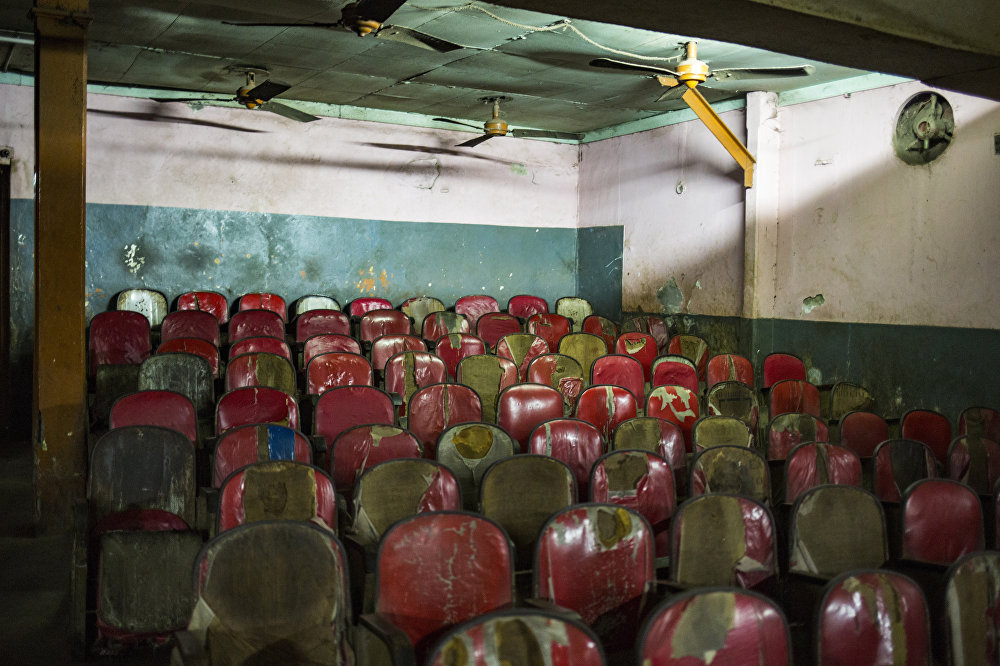 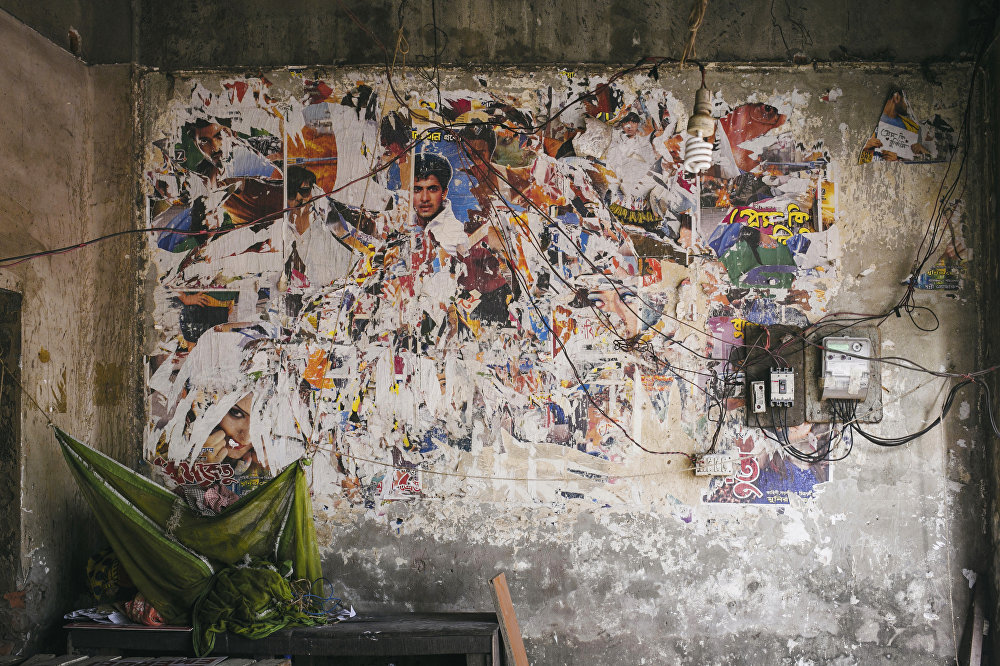 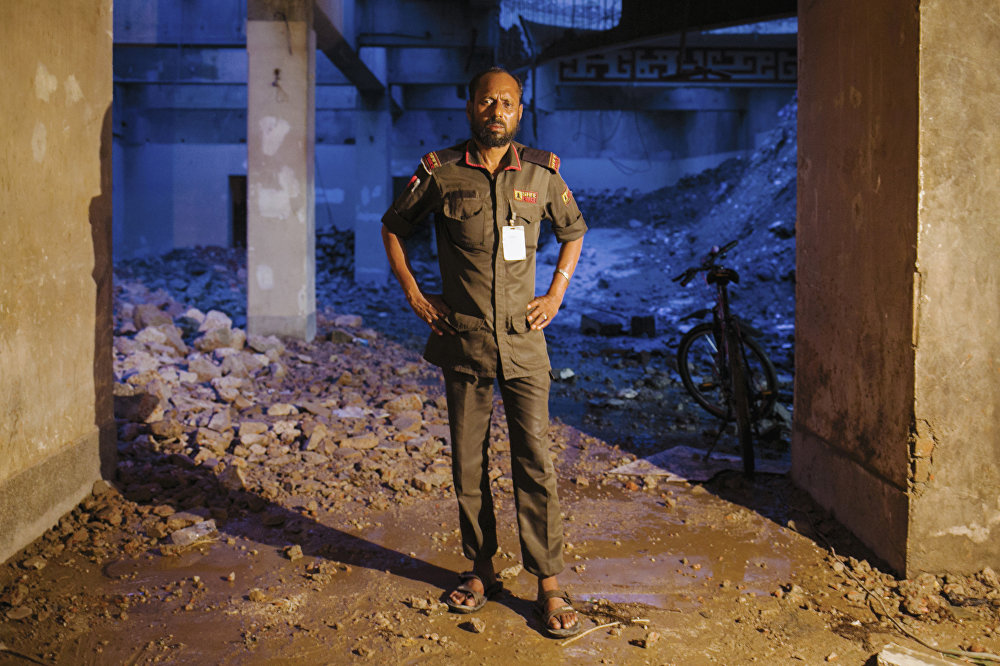 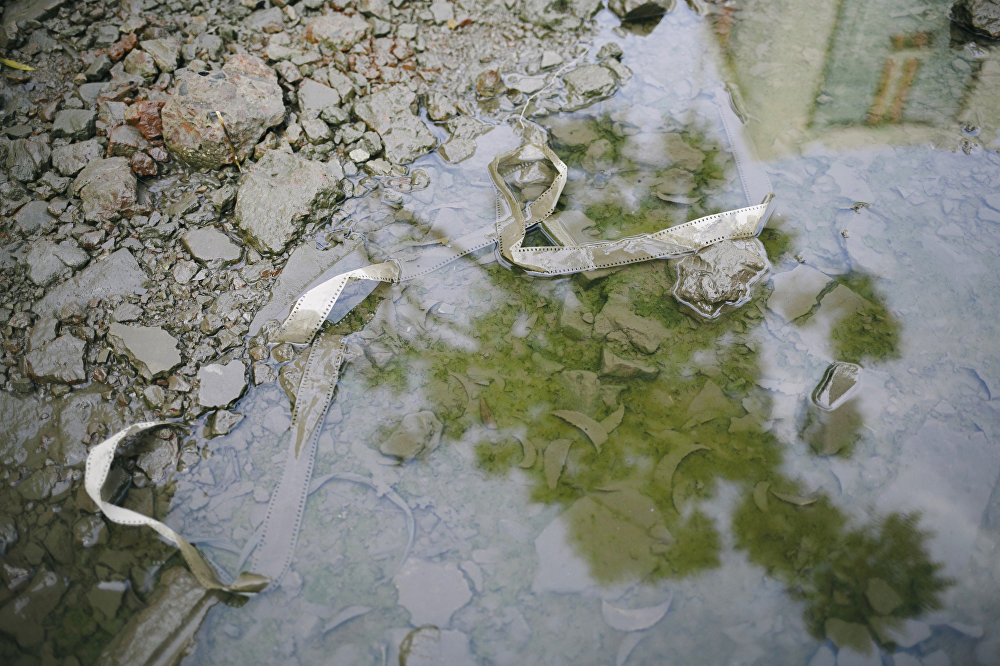 An empty movie theater in Dhaka, Bangladesh. The theaters look much like this even during screenings, with only a handful watching. This particular hall could seat 1,077 people but only 10-20 show up for each screening.
Once, cinema halls had elaborately decorated lounges with luxurious settings for their patrons. But, most of them have become empty and very Spartan in decor to save expenses.
A part of a wall decorated with mirrors is seen in a cinema hall in Dhaka. Mirrors, chandeliers and decorative lighting were once a common sight in Bangladeshi cinema halls.
The projectionist at a cinema hall in Dhaka sits idly as the show goes on. Cinema halls have moved from celluloid projection systems to modern digital projectors. But, the improvement in technology hasn’t necessarily translated into business success for the halls.
Clothes hang from wires while decaying ticket books lie on the ground. This is a room just beside the projection room in a cinema hall in Bangladesh. Poorly paid staff often live in the facility to save money.
Cinema halls with their declining audiences have assumed a new purpose. The empty lounges and dark halls serve as spots for lovers to have some intimacy and privacy in a country which doesn't approve of public display of affection.
A group of Muslim cinema hall employees praying in a mosque inside the cinema hall. Movie theaters often screen pornographic material in between the usual movies to attract a larger crowd. This is a direct contradiction to the religious values of the Muslim staff in a Muslim country like Bangladesh.
A half closed door at a prominent cinema hall in Dhaka, Bangladesh.
Decomposing seats at a cinema hall in Bangladesh. Most surviving cinema halls have decaying infrastructure and desolate run-down halls because of the low income from dwindling audiences. The majority of the halls have closed down and the few surviving ones are struggling to make ends meet.
Torn cinema posters in a broken down cinema hall. At the corner there is a mosquito net that the guard uses during his night’s slumber.
A guard on night duty stands at the front gate of a cinema hall that is being demolished. A lot of the cinema halls have been knocked down and replaced by commercial buildings. Most of the halls were situated in prime areas and have been sold off amid rising land prices.
A segment of a celluloid film lies in a muddy puddle as symbol of broken dreams that once took shape in the gorgeous cinema halls of this country.

An overview of the deterioration of cinema halls in Bangladesh due to a general decline in the country’s film industry. Halls are closing because of a drastic decrease in attendance over the last 10 years. The number of halls in operation has dwindled from over 1,200 to to a mere 300 throughout the country. 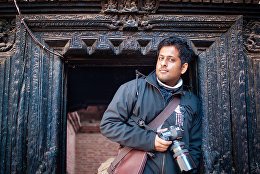 Aneek Mustafa Anwar is a documentary and portrait photographer based in Dhaka, Bangladesh. His work focuses on humanitarian social issues, consumerism, the effects of social media on society and urbanization in Southeast Asia.