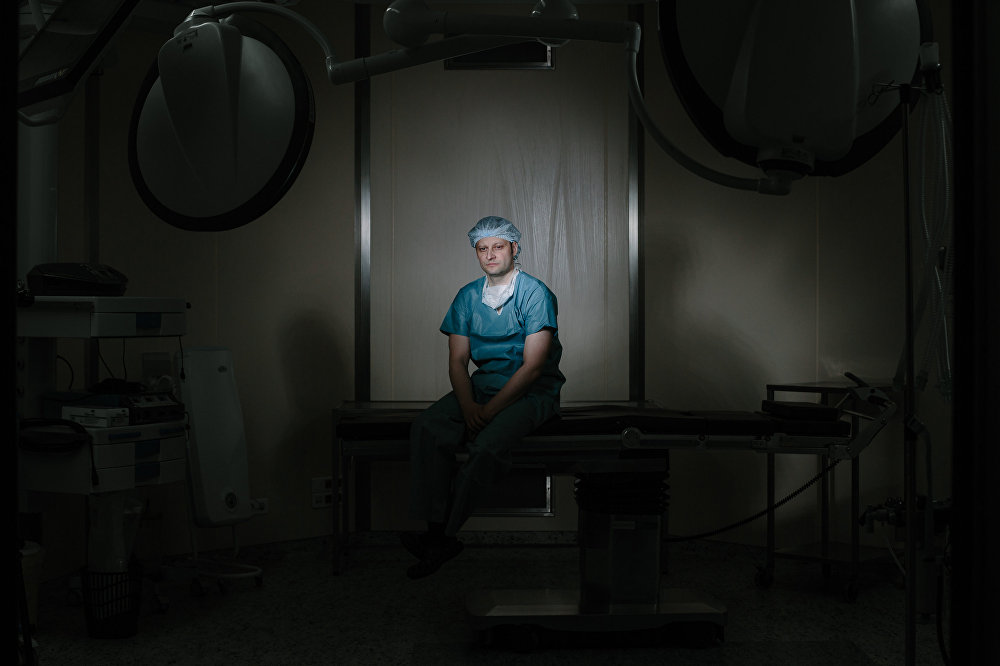 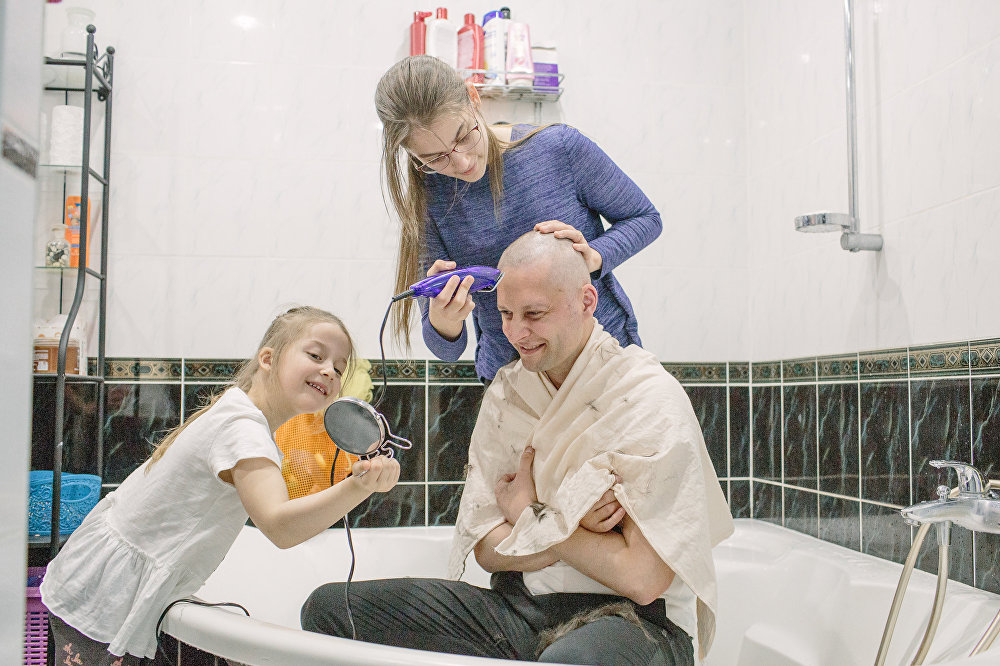 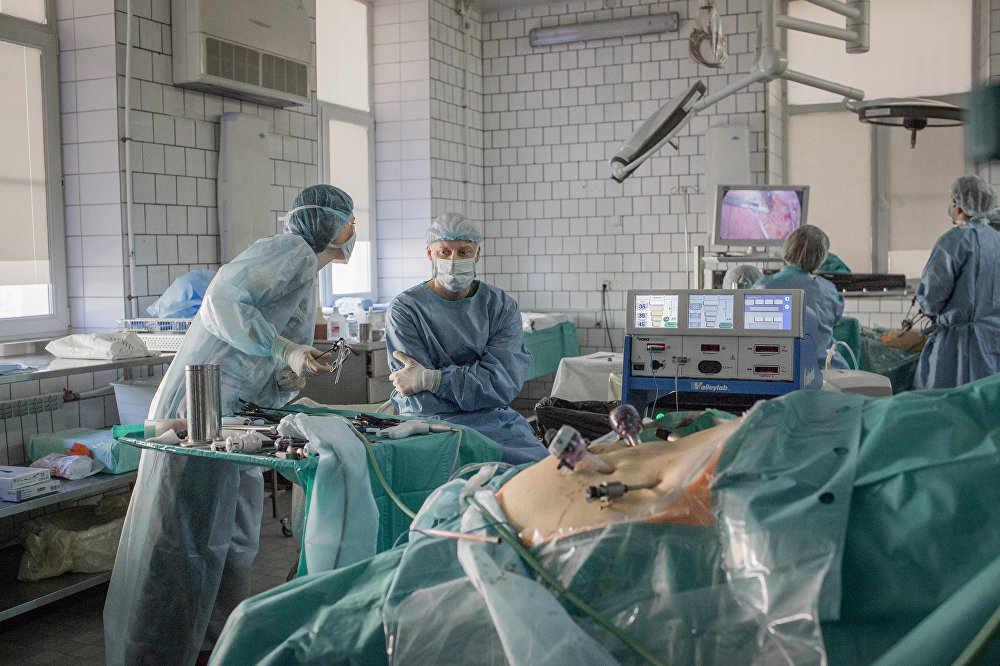 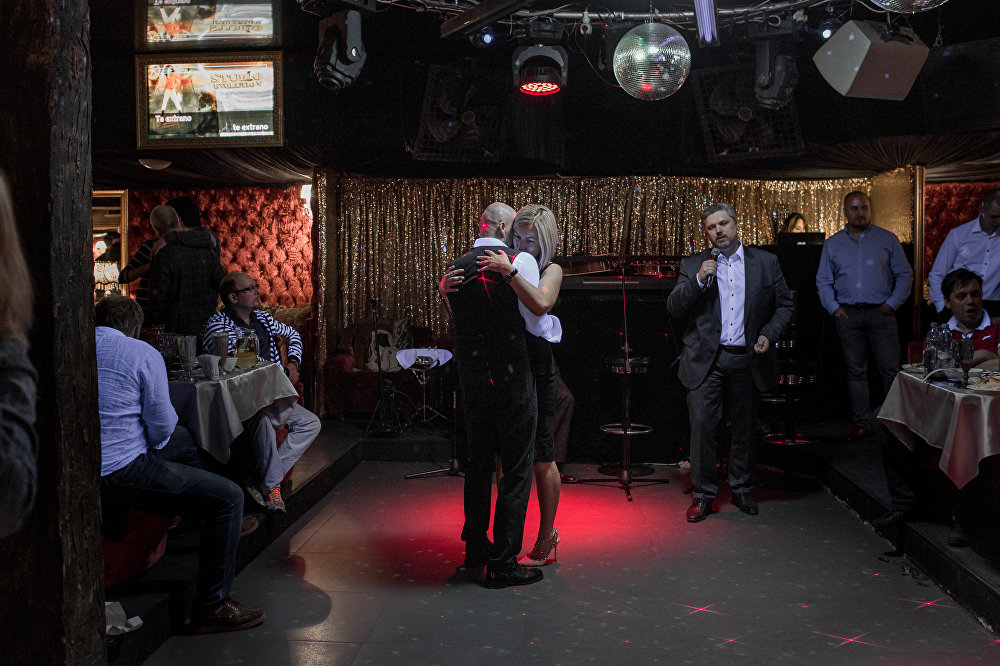 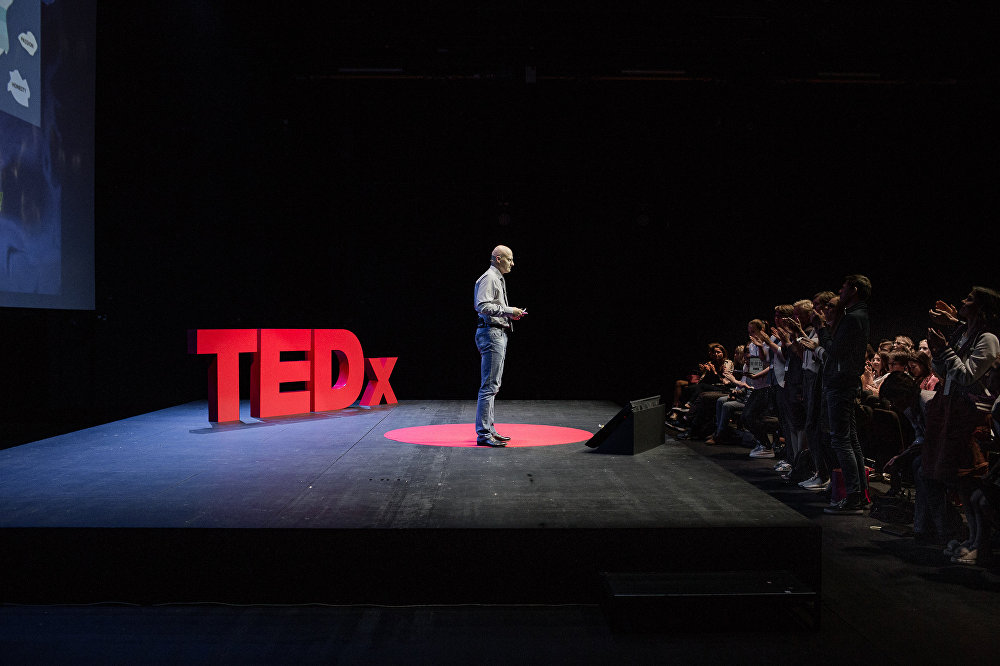 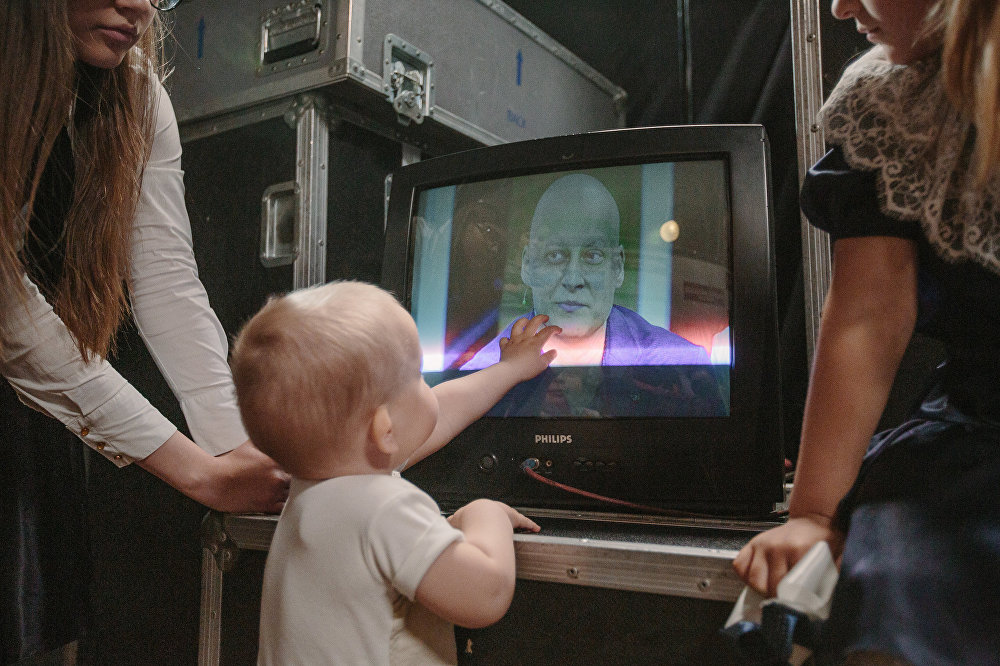 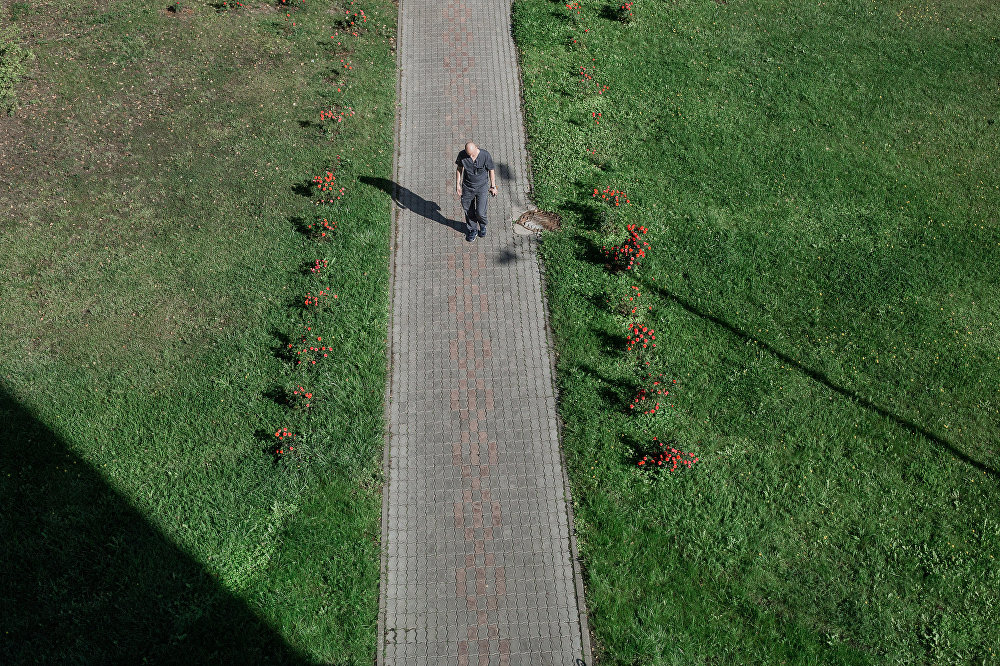 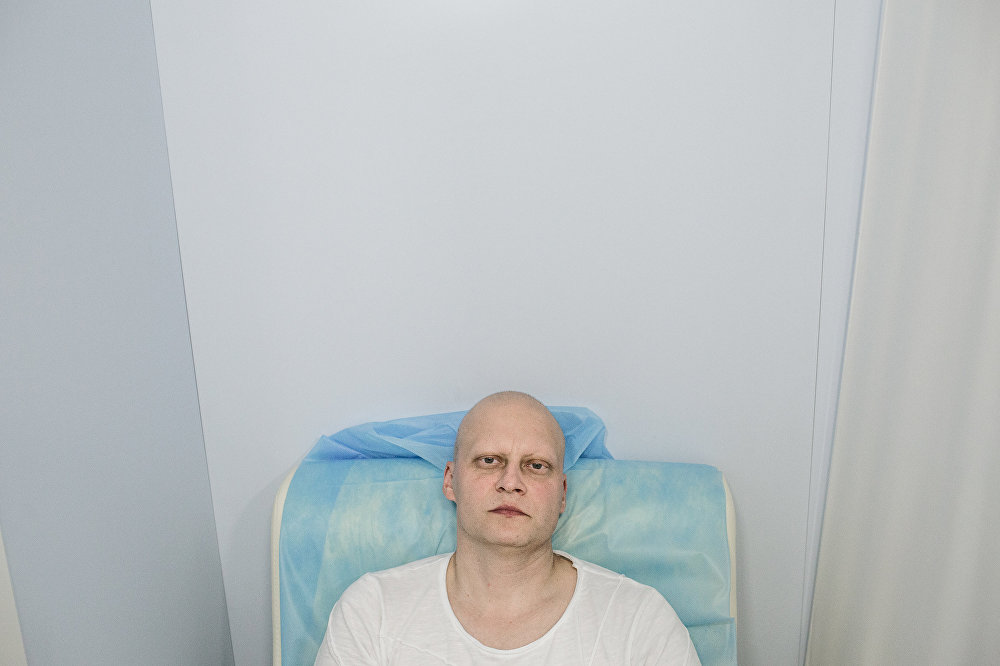 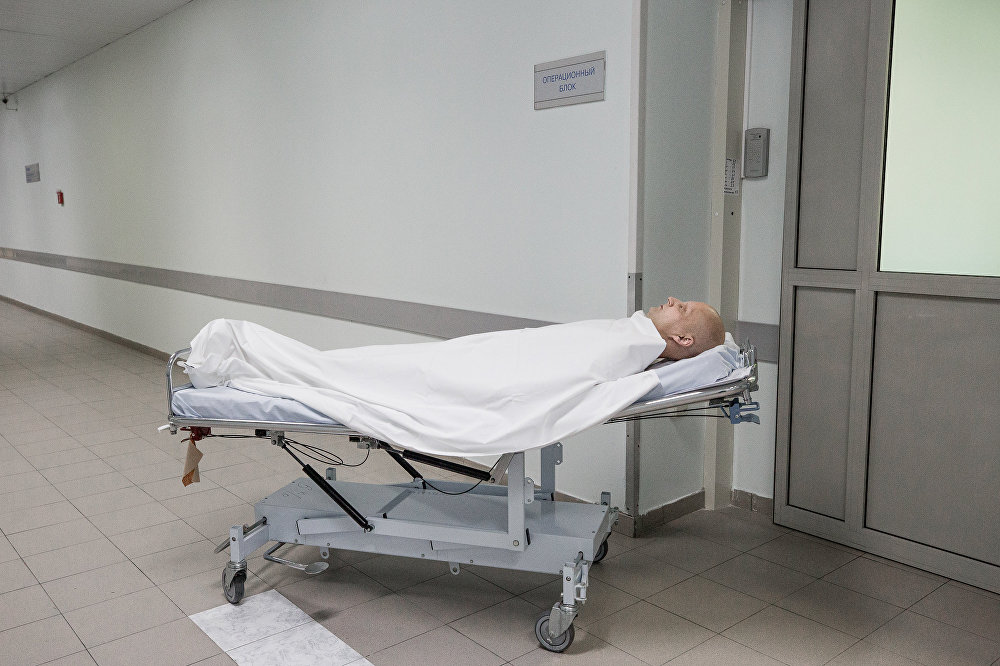 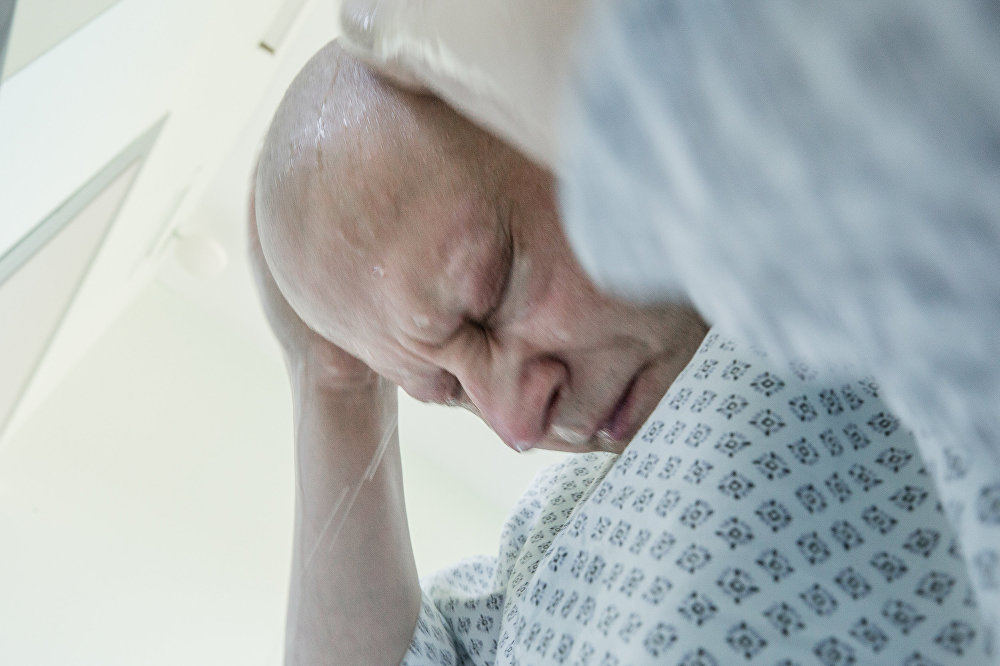 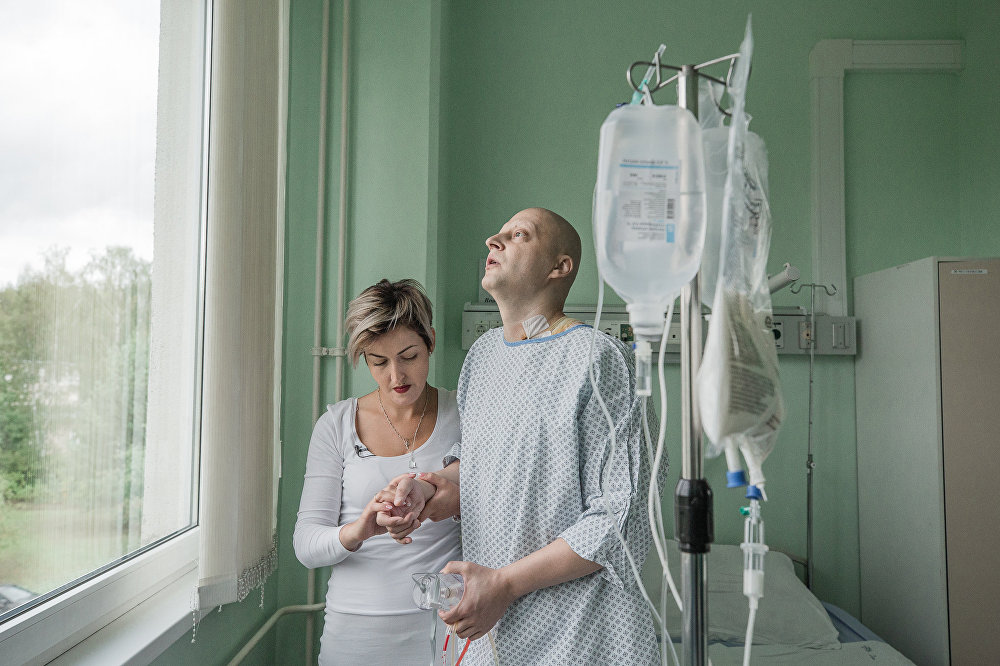 Pavlenko in the operating room at the clinic where he heads the oncology center.
Andrei Pavlenko performed more than 2,000 cancer surgeries over a ten-year period. In March 2018 he was diagnosed with stage 3 stomach cancer with peritoneal metastasis. The prognosis for cancers of this kind is generally poor with a survival rate of 5 percent.


Andrei’s daughters help their father shave his head after the first chemotherapy course.
Andrei is married with three children. He decided to share the story of his treatment in an online blog, since cancer patients in Russia usually don’t know where to go and what to do.
Andrei after a five-hour surgery.
The first side effects came after the first chemotherapy treatment, including vomiting, diarrhea, hair loss, and weakness. Andrei continued to work, keeping up his working rhythm, believing that a cancer patient has to continue doing what he loves and remain socially active.
Andrei dances with his wife at his 40th birthday party.
Two months after being diagnosed with cancer Andrei was dancing with his wife Anna in a club where his friends and colleagues organized a party to mark his 40th birthday.
The audience gives Andrei a round of applause after his presentation at TEDx.
Andrei continues his lectures for cancer surgeons and makes presentations for a broader audience. He also gives several interviews per day and answers dozens of letters from cancer patients. His goal is to establish a charity for promoting systematic care for cancer patients and improving the training of cancer surgeons.
Andrei’s children are watching their dad behind the scenes of Andrei Malakhov’s television show.
One month after Andrei started his online diary, his story was featured by all major television networks in Russia, making him a media celebrity and creating additional stress for his family.
Andrei walks to the surgery department where he will undergo surgery.
In mid-summer of 2018 Andrei had to stop performing surgeries due to peripheral neuropathy. He cannot feel his fingertips anymore, making it impossible to hold surgery tools. In August, he established his charity.
Andrei prepares for a PET scan.
After eight experimental chemotherapy courses (instead of the usual four), Andrei moved to Moscow for more tests. A CT scan showed that the tumor responded to chemotherapy, shrinking by half. His type of cancer requires that the stomach is removed entirely.
Andrei is waiting for the doors of the surgery suit to open.
According to statistics, about 3 percent of stomach removal operations have a lethal outcome.
Andrei washes his head and face after surgery on his own.
After surgery, Andrei receives painkillers every four hours. He can hardly talk.
Andrei’s wife helps him get up for the first time after stomach removal.
After surgery, Andrei will lose 10 kg and will not be able to perform surgery for six months. According to a WHO joint project, Russia was among the top five countries in the world with the largest number of cancer-related deaths in 2018. Andrei is fighting to change this.

Andrei Pavlenko, a brilliant 39-year-old cancer surgeon, became a high-profile figure in the fight against cancer in Russia last year: diagnosed with stage 3 stomach cancer in March 2018, he decided to devote his life to changing the system of cancer care in Russia.

Ksenia Ivanova is a documentary photographer from St. Petersburg, Russia, born in 1990 in the USSR. In photography her main interest is focused on the problem of cultural and national identity. Her work has been published in The New York Times, The Washington Post, Takie Dela, etc.