Wrangel Island is the northernmost protected island in the Russian Arctic. The Arctic Ocean divides the island almost into two parts at Meridian 180, so it is located in the Western and Eastern hemispheres of our planet. Visiting Wrangel Island Nature Reserve is restricted, but there are about 10 tourist routes in summer and autumn. Tourists can only enter the reserve accompanied by rangers. They monitor the safety of the tourists and animals that live on the island. This photo depicts Pavel Kulemeyev, a researcher at Wrangel Island Nature Reserve, in his "natural habitat." Pavel graduated from Katanov Khakassia State University and has been working in the reserve since January 2018 – now he is not only a scientist and inspector at the reserve, but also a polar explorer. After all, the conditions on the island are really tough. 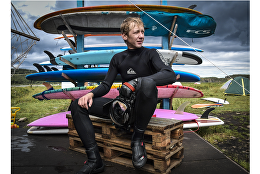 Born in 1989 in Khorol, Primorye Territory. In 2006 moved to Vladivostok to study at the Far Eastern State Technical University's Oil and Gas Institute. Since 2011, has worked as a TASS photojournalist in the Far Eastern Federal District.