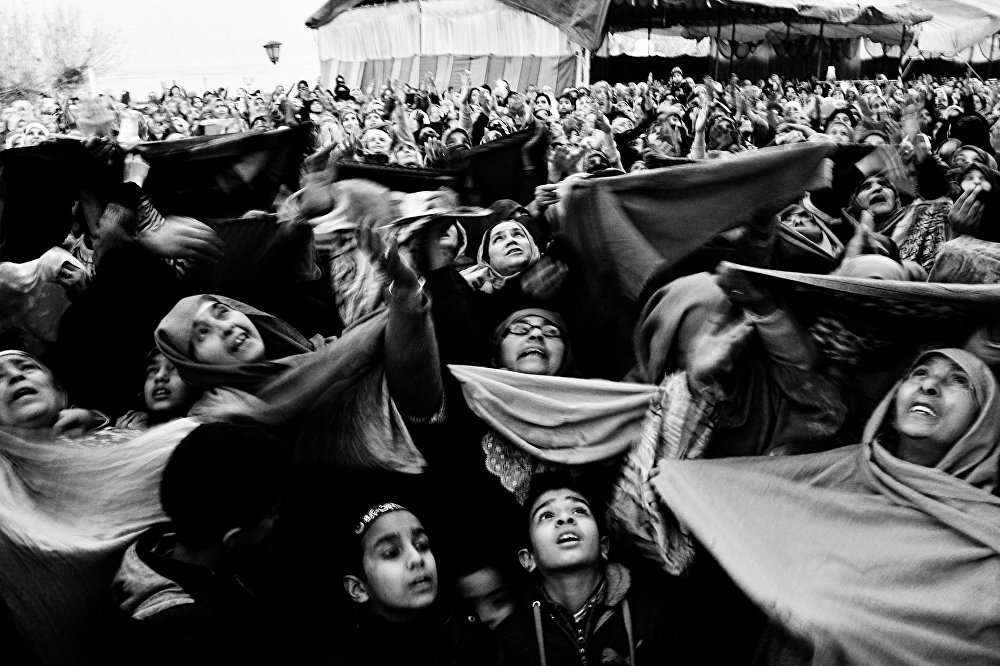 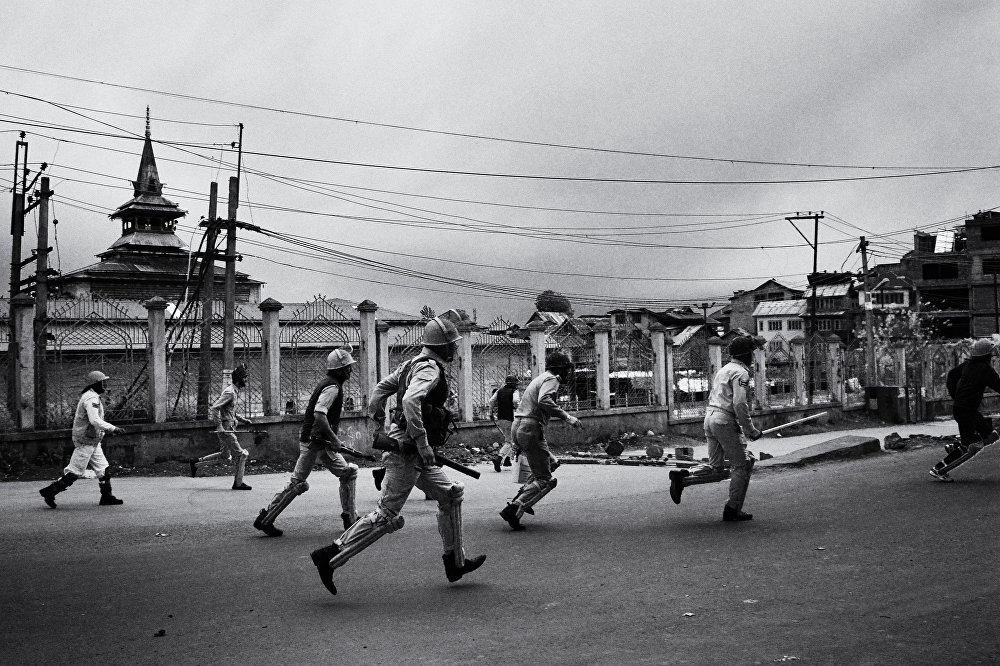 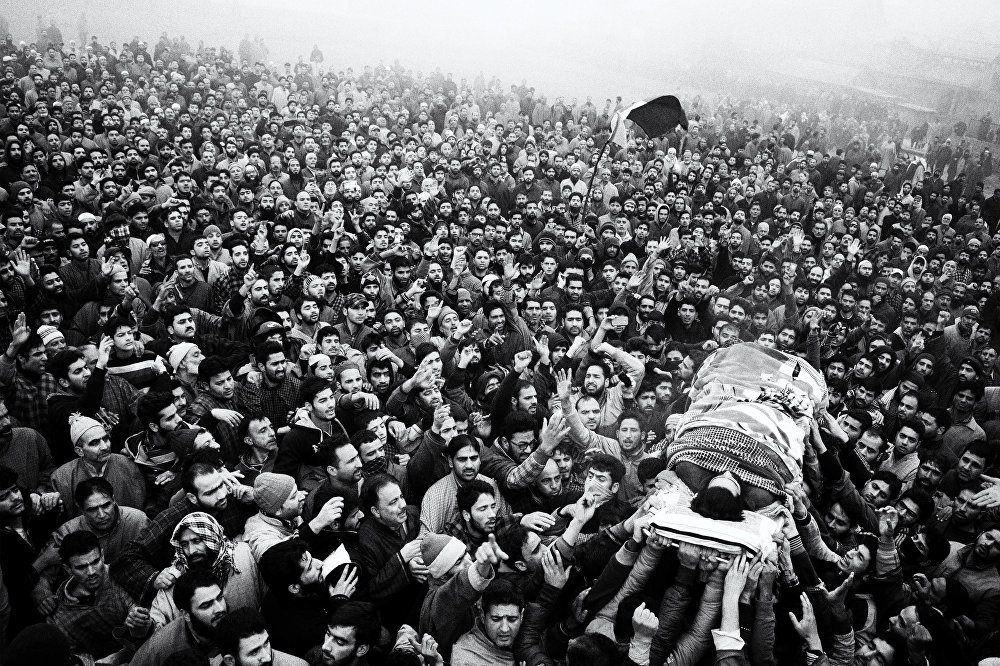 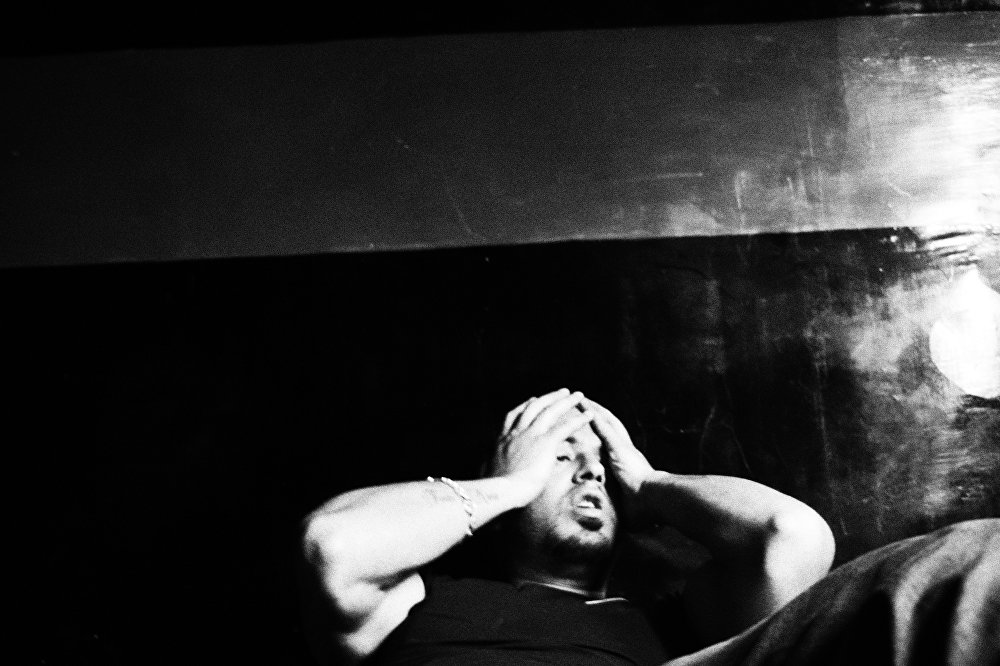 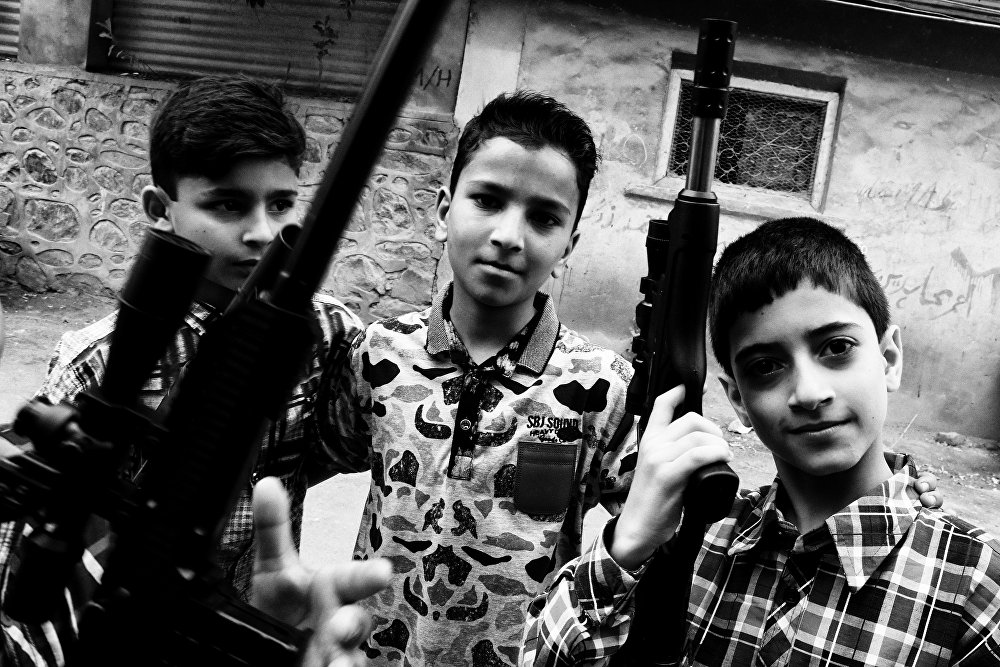 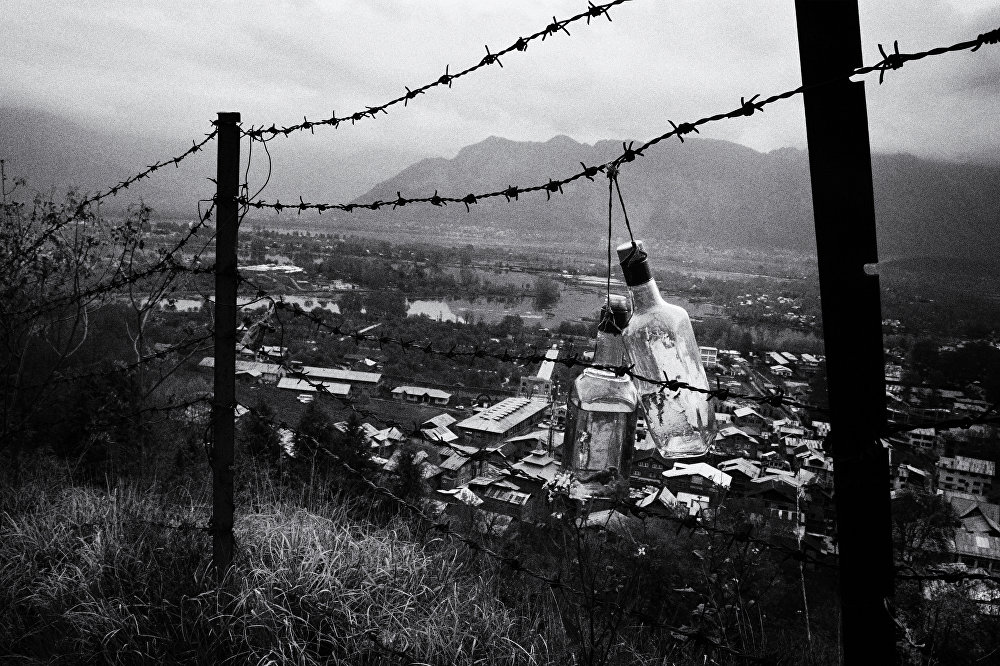 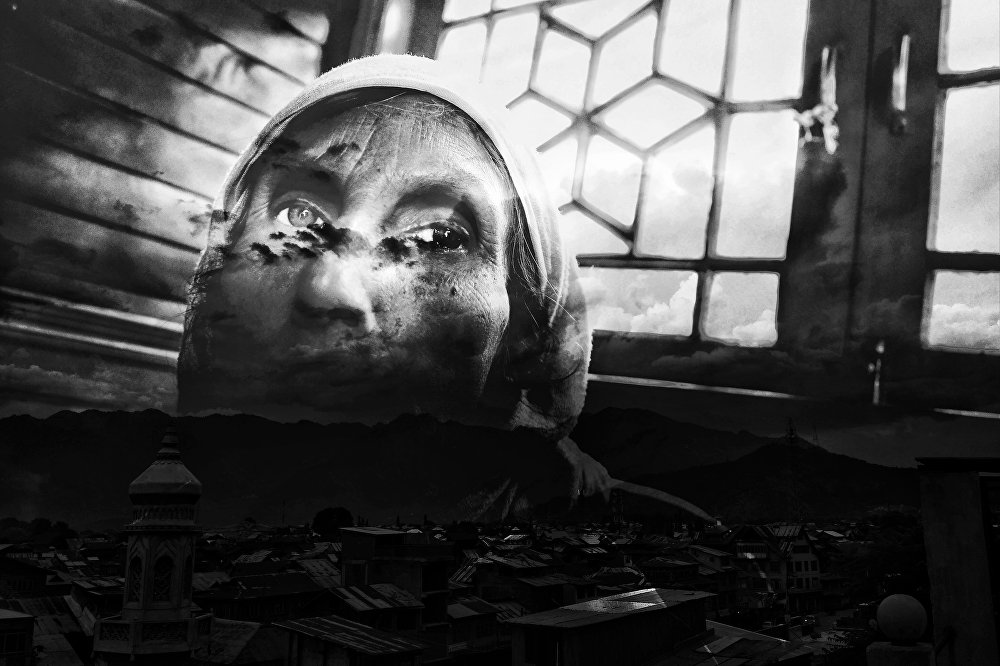 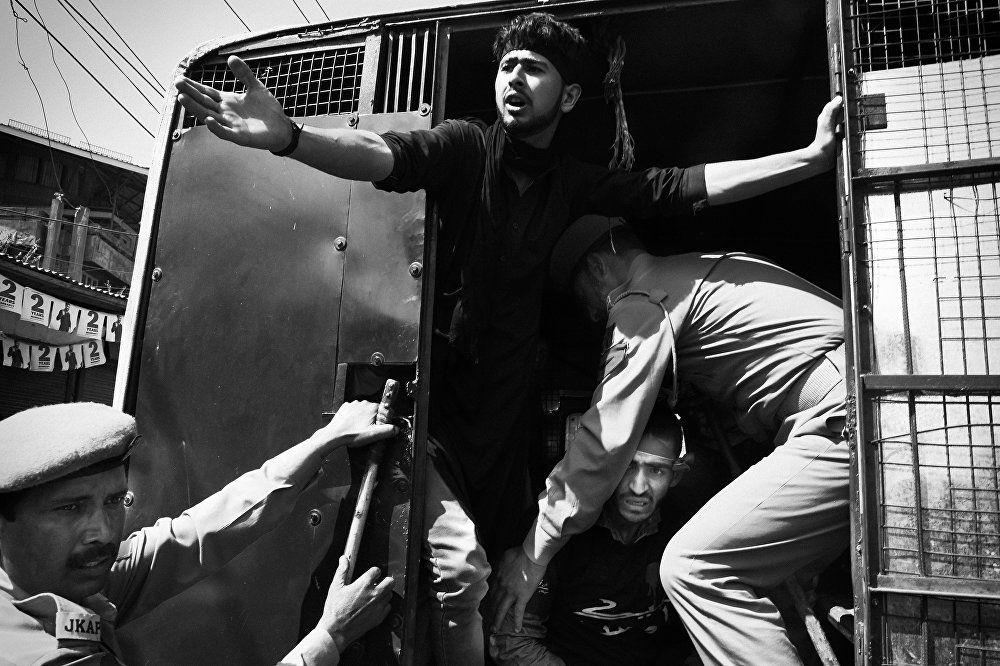 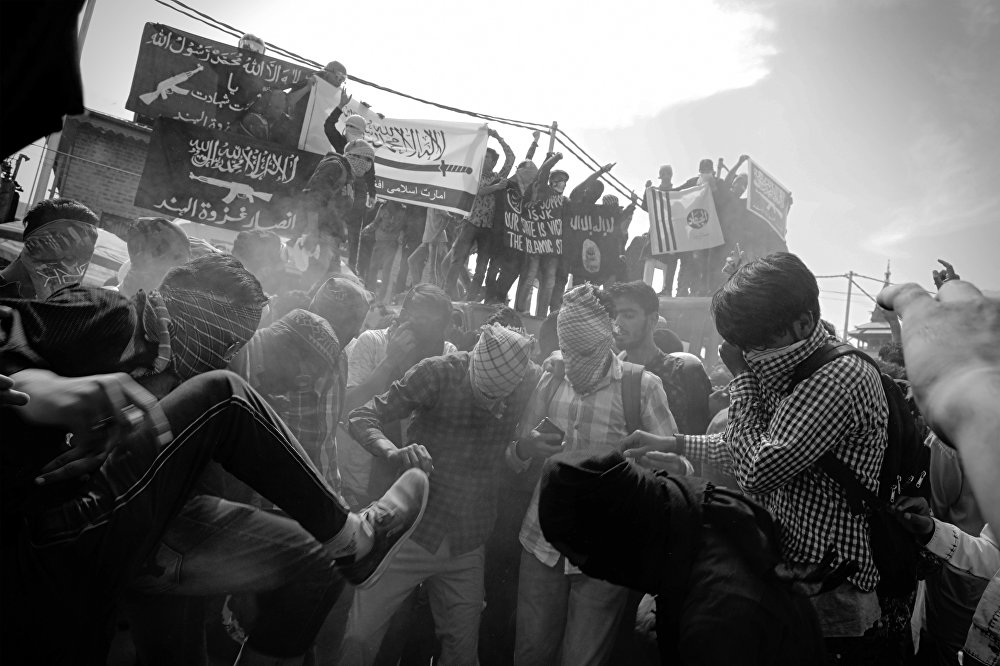 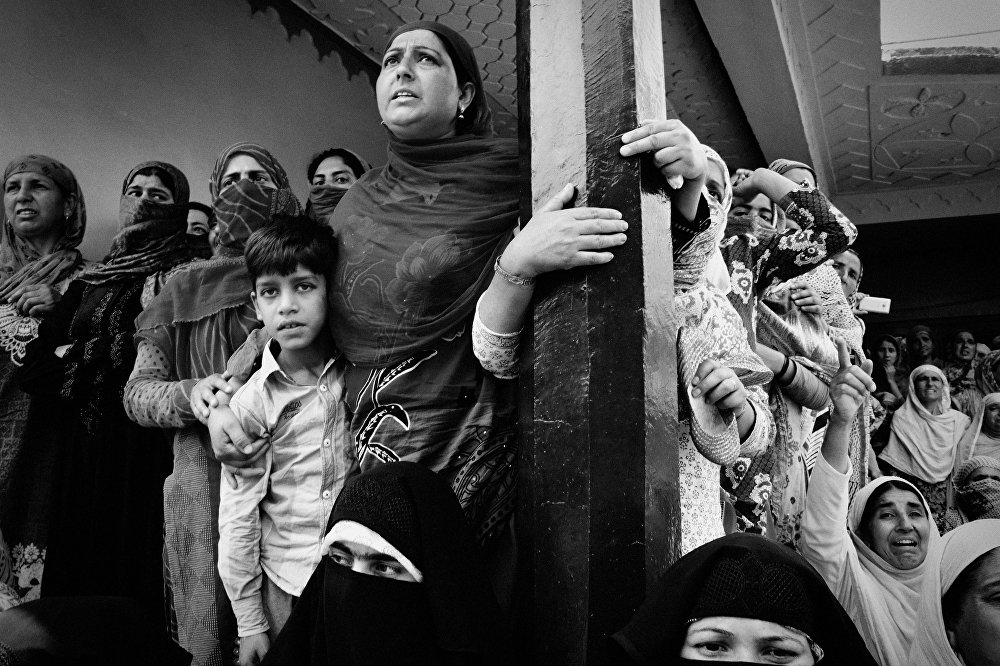 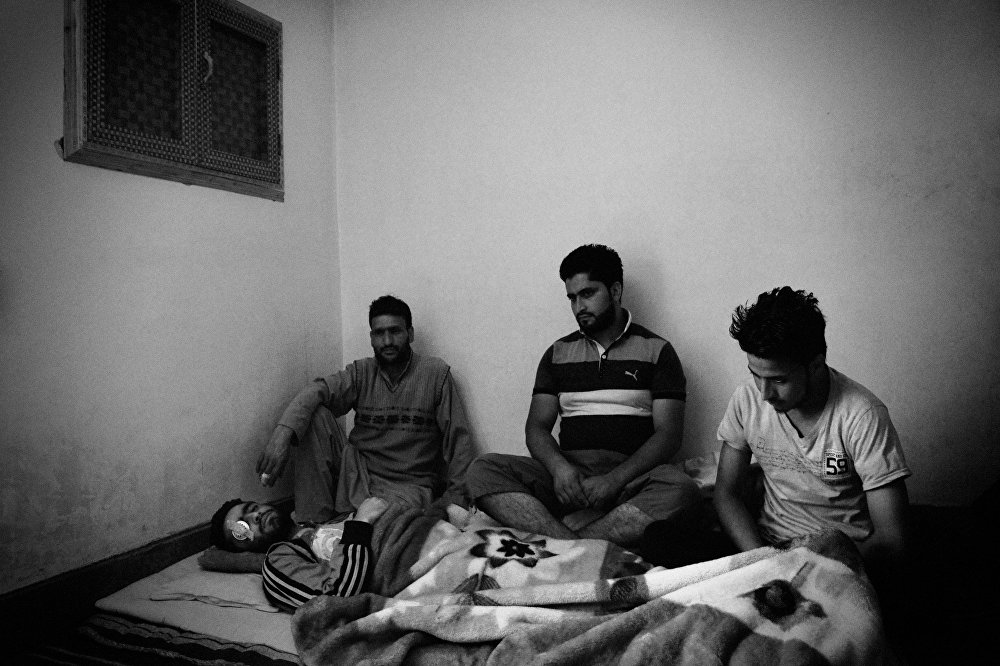 The relic of Prophet Muhammad is displayed before thousands of believers on the eve of Eid-i-Milad, the birth anniversary of the prophet, at the Hazratbal shrine in Srinagar, Kashmir. Faith is viewed as a significant source of healing for those directly and indirectly impacted by decades of violence in Kashmir.
Indian forces advance on young demonstrators in clashes following Friday prayers at Jamia Masjid, Srinagar’s largest mosque. The mosque has been a hub of resistance for decades and an inspiration behind intermittent clashes between protesters and paramilitary soldiers.
Kashmiri mourners brave the bitter cold to chant pro-freedom, anti-India slogans and wave Pakistani flags while carrying the dead body of Adil Sheikh, a Hizbul Mujhahideen fighter.
Kashmir-based photojournalist Xuhaib Maqbool Humzaended up losing vision in his left eye after being shot with a pellet while covering a protest in the old city of Srinagar during the 2016 uprising. That year over 350 people were partially or totally blinded by the indiscriminate use of pellet guns by Indian soldiers. In June 2016 following the killing of top rebel commander Burhan Muzzafar Wani of Hizbul Mujahideen, a massive uprising ensued in Kashmir resulting in the deaths of over 100 young people, mostly teenagers, when police opened fire. More than 18,000 were injured, many by pellet guns.
On the first day of Eid, Kashmiri kids pose with toy guns, playacting the ongoing armed resistance in Kashmir. Children have suffered most from the ceaseless violence.
Empty liquor bottles hang from barbed wire at the foothills of the historical Hariparbat fort in Srinagar. On June 2014, authorities opened it up to the public and tourists after 24 years.
Haleema, a mentally challenged Kashmiri woman, stands near the window of a mosque in old city Srinagar. Two decades of conflict in Kashmir have left almost 100,000 people dead. Most of these were young men, bread winners, who left behind mothers, wives, sisters, and children. Thousands of women live in extreme poverty and depression. There are around 800,000 people in Kashmir who suffer from post-traumatic stress disorder (PTSD), most of them women who witnessed a death in their immediate or extended families.
Government forces detain a dozen of Shiite Muslims in the Batamaloo area of Srinagar on Monday, September 9, 2018, during an 8th day Muharram procession through the curfew-locked city streets. The march has been banned by government authorities since the armed struggle against Indian rule broke out in Kashmir over two decades ago.
Young masked protesters wave flags of various militant organizations and shout slogans in support of the Palestinian and Kashmiri causes, and denouncing the US, Israel and India, during a protest to mark international Quds Day at Jamia Mosque in Srinagar, Kashmir. Quds is the Arabic word for Jerusalem. The annual demonstration is to show solidarity with Palestinians and condemn Israel’s illegal occupation of Palestinian land.
Women mourn the death of Lashker militant Adil Mushtaq Mir. The 18-year-old 12th-grader was killed in a gunfight with army soldiers along with two fellow fighters in South Kashmir’s Arwani Village in the Kulgam district. According to official figures, government forces have killed at least 69 armed rebels in Kashmir since January this year, compared to 213 in 2017 and 150 in 2016. In last 29 months, they have killed 432 militants.
Gowhar Ahmed Sheikh, a 10th-grader, was struck by pellets in his right eye during a peaceful protest in south Kashmir’s Khrew area against government trucks carrying cement. Gowhar and his classmate Iqbal Ahmed Sheikh were shot by para-military CRPF troopers on the same day April 2, 2016.
A civilian shows bullet shells found at the site of a gunfight in which three militants were killed during a nightlong skirmish with Indian forces in Srinagar, Kashmir.

Kashmir, a disputed territory between India and Pakistan, has been living in a state of conflict since 1989. The genesis of the dispute goes back to 1947, when the Indian subcontinent was divided after the end of the British imperial rule in the region. Over the last 25 years, the humanitarian cost of the conflict has been enormous. Since the armed insurgency broke out against Indian rule in 1989, more than 90,000 people have died. There are thousands of orphans and widows. Detention, rape and torture have become routine. For the last three decades, Kashmiris have been living under the shadow of the gun, with over half a million Indian soldiers occupying every corner of the state. Black laws give Indian forces impunity to kill or arrest anyone without fear of prosecution. Gunfights, funerals and wailing women are commonplace scenes that unfold in the region on a daily basis. 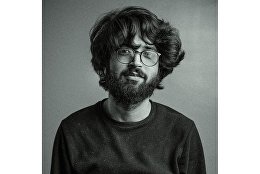 Sharafat Ali is a Kashmir-based independent photographer. As someone who has lived through the conflict, he seeks to tell the stories of Kashmir to the world. His work mainly focuses on the conflict, politics, daily life and personal visual narrative experiences in Kashmir.