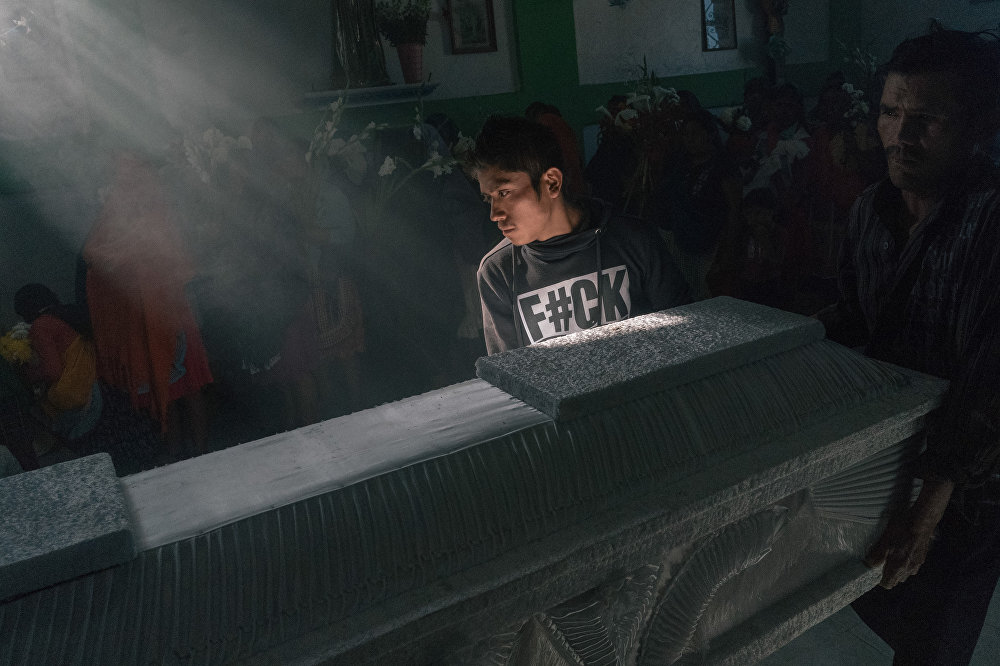 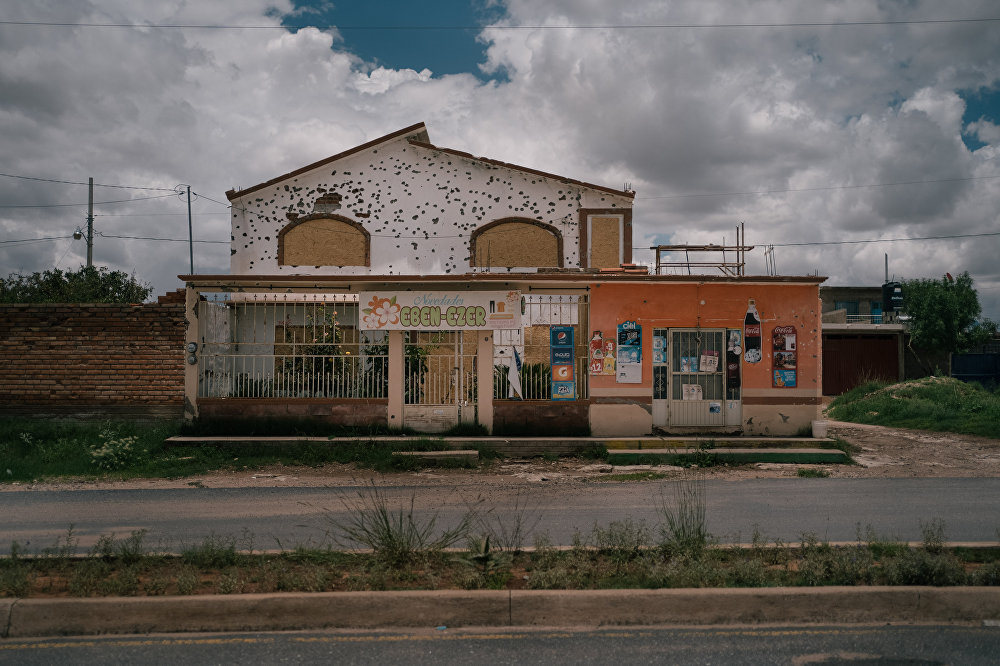 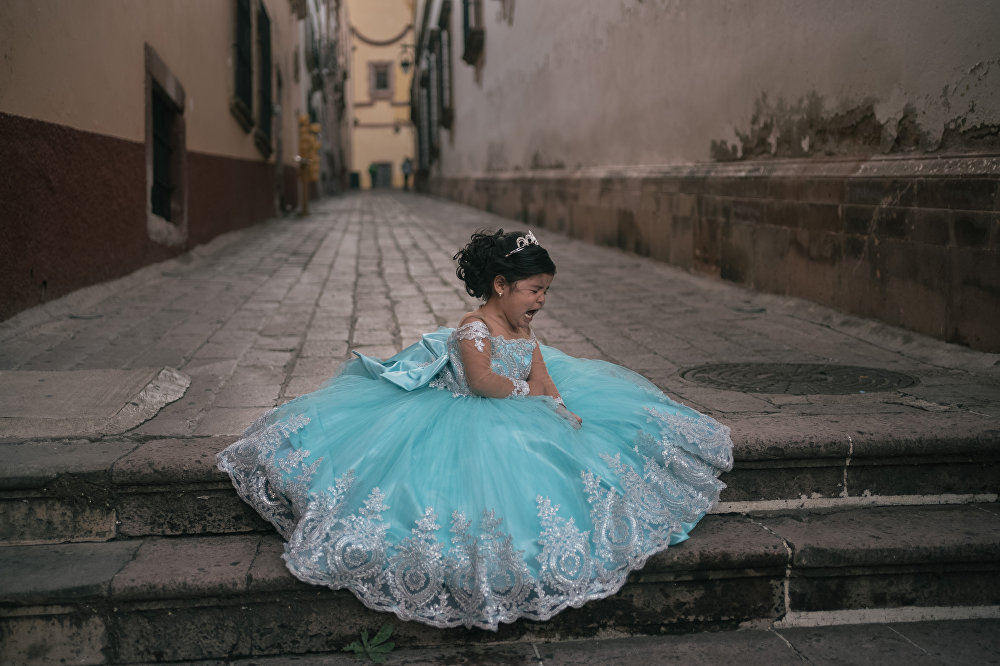 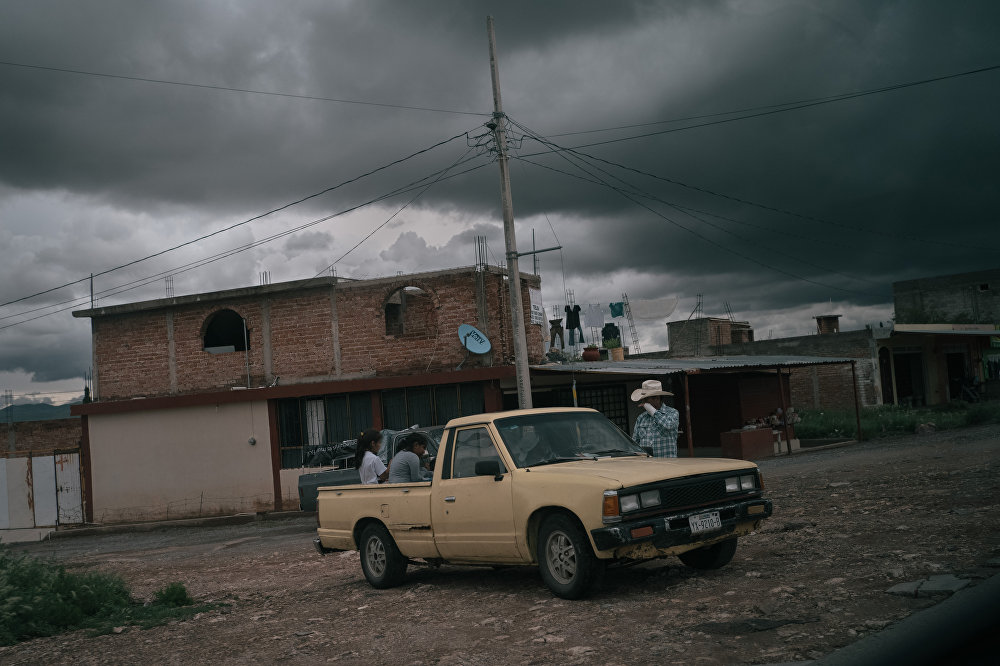 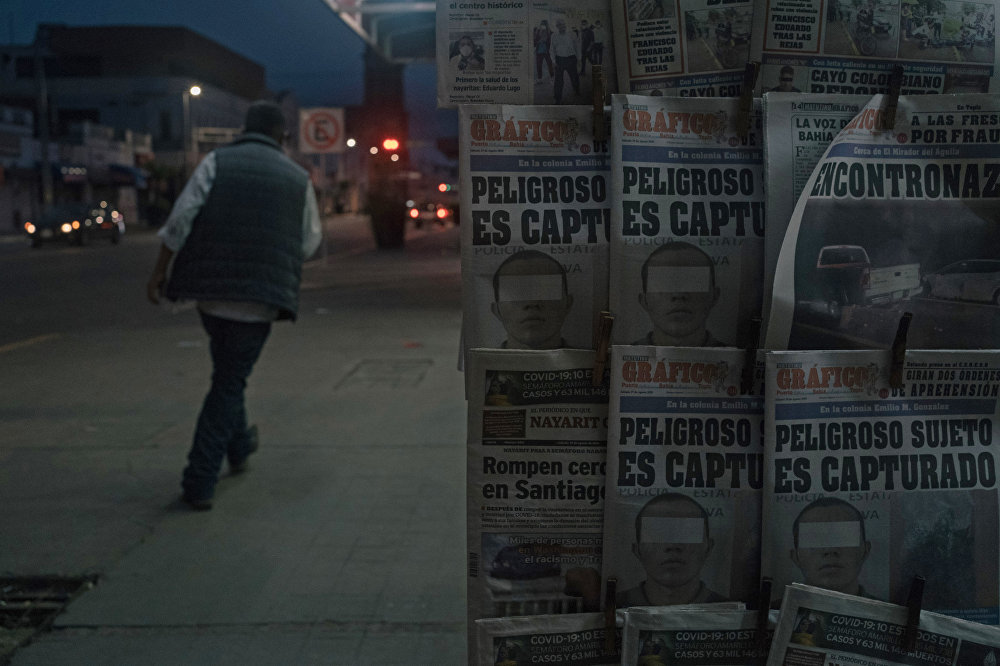 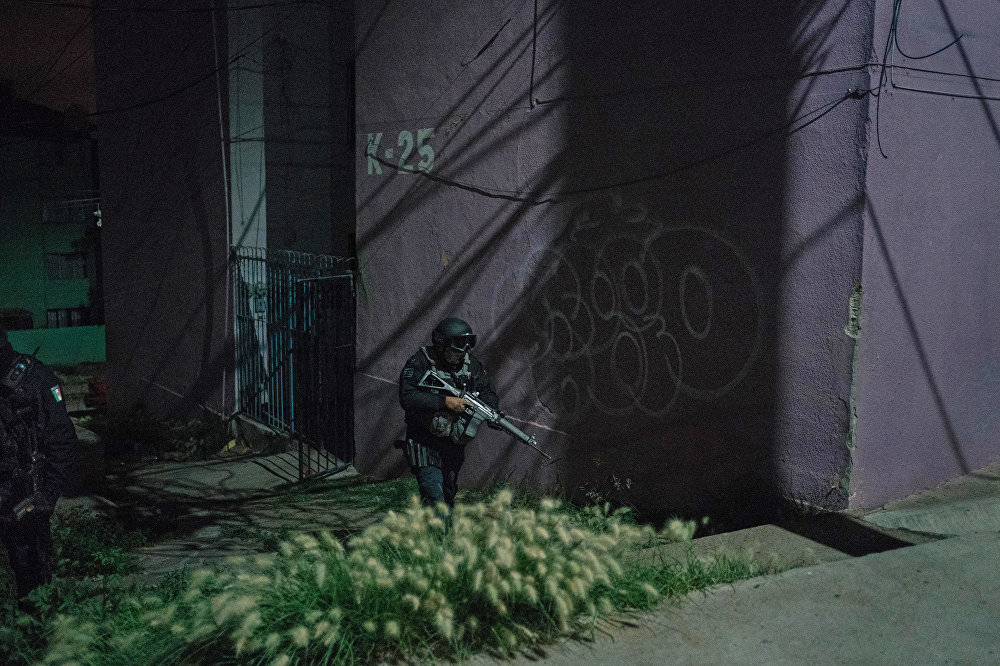 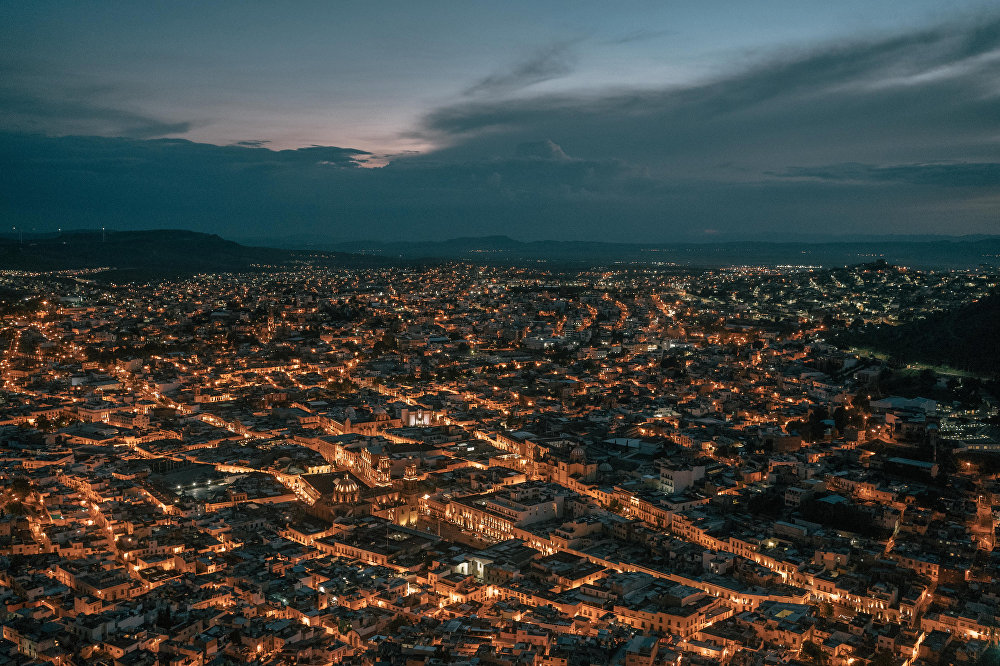 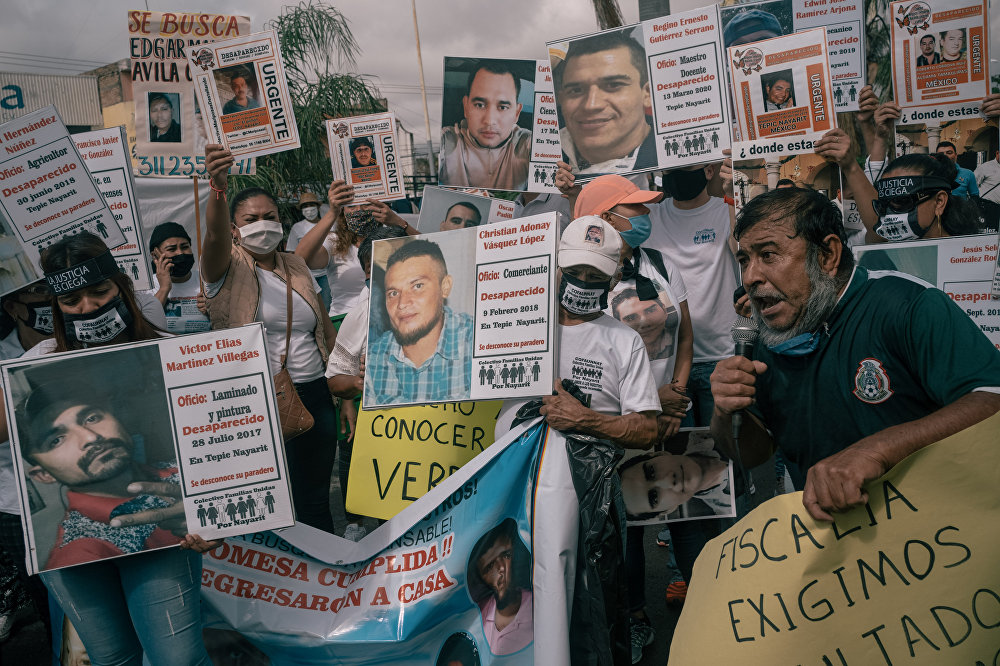 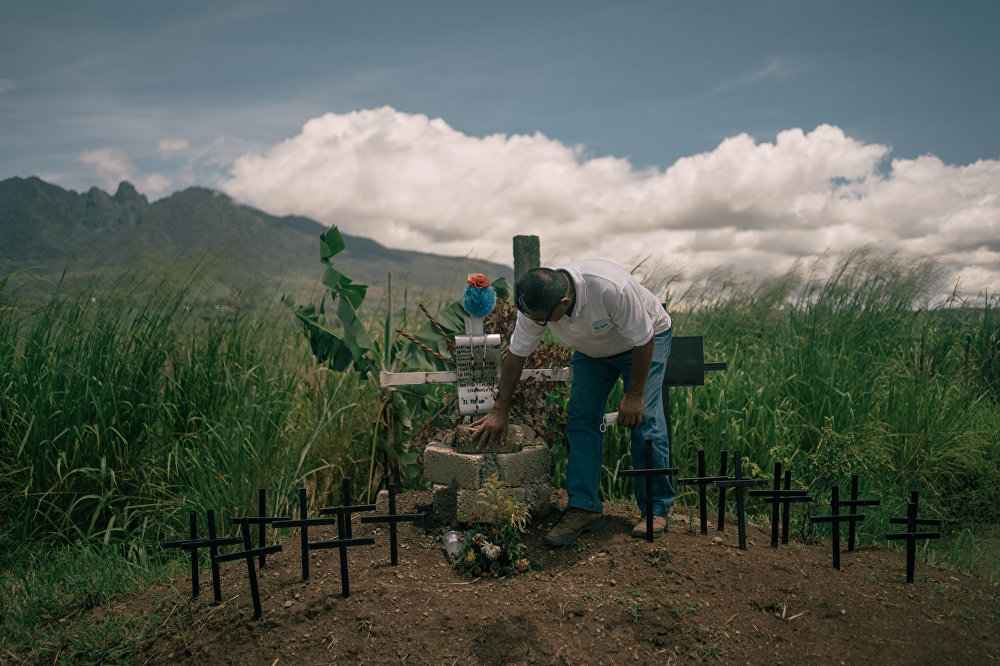 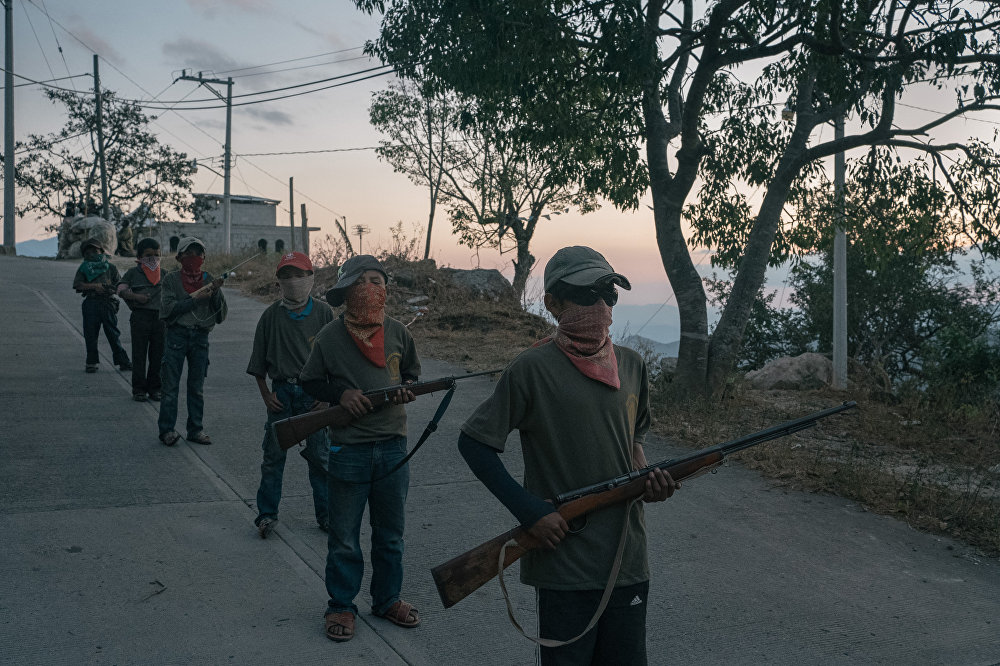 A municipal police officer in Mexico's Zacatecas city holds up caution tape at the scene of a shooting. During decades of authoritarian rule, senior federal officials quietly refereed between cartels. State and local authorities fell in line, accepting bribes to look the other way as heroin or marijuana flowed through their states. Mexico’s democratization has changed the equation. Now local governments are more autonomous. Criminal groups increasingly are seeking influence at the municipal and state level, through threats or bribery. The country’s precarious justice system has proved incapable of checking such graft.
Ricardo Mendoza, a community police officer, carries the coffin of his fifteen-year-old nephew, Israel Mendoza, in a church of Alcozacán, Guerrero State, Mexico. In January, the drug cartel Los Ardillos brutally murdered 10 indigenous musicians playing at a party on their turf.
Bullet holes riddle a house and grocery store in Juan Aldama, in Zacatecas, after an attack. In northern Zacatecas, a faction of the Sinaloa cartel led by Ismael “El Mayo” Zambada has moved in. Gunmen in pickups have been seen roaming freely through the area, “MZ” emblazoned on their helmets or guns.
A child cries during a birthday photoshoot inthe historical center of Zacatecas. Four cartels are battling for control of fentanyl routes through Zacatecas, while smaller groups rob and extort money from ordinary Mexicans.
A family sits in a truck parked by a road in Guadalupe, Zacatecas, Mexico. Hundreds of thousands of people have fled their homes to escape the violence; the Mexican Congress is poised to pass the country’s first law to help the internally displaced.
A drunk man passes by a newspaper stand carrying the censored picture of a member of a criminal organization arrested by the state police of Nayarit, in Tepic. The arrest of Mexico’s former defense minister and the state attorney general of Nayarit in the U.S, both accused of pocketing bribes from the H-2 cartel, demonstrate the intricate ties between organized crime and Mexican law enforcement.
A member of the municipal police patrols a public housing complex in Guadalupe, Zacatecas state, Mexico, on August 8, 2020. In Mexico, municipal police are some of the lowest paid law enforcement officers, which, analysts believe has contributed to their accepting bribes from criminal groups.
A family that unsuccessfully sought asylum in the U.S. poses for a portrait in their home on the outskirts of Juan Aldama, Zacatecas, Mexico. Their neighborhood was plagued by robberies, disappearances, and street-corner drug dealing. Then, one night in July 2019, gunmen ambushed and killed the police chief. Officers vanished from the streets. “My husband told me, ‘We have to get out of here,’ ” she said. “He told me, ‘Don’t you see there are no police? Don’t you see they’re frightened? Who will protect us?’ ”
She had heard that the United States was offering asylum to Mexicans in danger. The family stuffed some clothes into backpacks and boarded a bus for the 600-mile trip to the Texas border. They returned home after they were asked to wait in Mexico while their application was considered.
View of Zacatecas from a hill. Shortly before López Obrador took office in December 2018, the CIA concluded that drug groups controlled about 20 percent of Mexican territory. The Mexican government denies it has lost control of any part of the country. But in a little-noticed passage in its security plan last year, it likened crime groups to insurgents, with “a level of organization, firepower and territorial control comparable to what armed political groups have had in other places.”
Family members demand justice at a protest outside the attorney general’s office, holding up photos of their loved ones, who were disappeared by the attorney general’s masked police. “A criminal group took over the institutions of the state of Nayarit for six years,” said Rodrigo González Barrios, spokesman for the truth commission.
Требующие справедливости родственники пропавших без вести граждан проводят акцию протеста перед зданием генеральной прокуратуры. Они поднимают вверх фотографии своих близких, которых, по их словам, схватили полицейские в масках, подчиняющиеся лично генеральному прокурору. «Преступная группировка на шесть лет захватила государственные учреждения штата Наярит», - заявил пресс-секретарь комиссии по установлению истины Родриго Гонсалес Барриос.
Santiago Pérez, leader of a local group search, fixes the bricks holding a cross marking the mass grave in Nayarit, where he found the remains of his son along with other 11 disappeared people. Disappearances became known as a unique kind of evil, denying families closure, leaving them forever tortured by the mystery of their loved ones’ fates.
Alex (13), right, and other children stand during a Regional Coordinator of Community Authorities (CRAC-PF) community police force gun training in the town of Ayahualtempa, Guerrero state, Mexico. Alex had to stop attending high school in the neighboring town of Hueycantenango due to the presence of drug cartel Los Ardillos. He then joined the community police along with his father.

As Mexico’s homicide rate reached its highest level in six decades, the government released an even more alarming statistic: 80,517 people have disappeared since 2006. Hundreds of thousands of people have also fled their homes to escape violence, and the Mexican Congress is poised to pass the country’s first law to help the internally displaced. President Andrés Manuel López Obrador has emphasized social programs to address the poverty at the root of the crime wave. Abrazos no balazos, he says: Hugs, not bullets. At the same time, he has created a 100,000-member national guard to reclaim areas with little state presence. It’s not clear that will make a significant difference. Kids learning how to defend their small town in the mountains and the arrest of Mexico’s former defense minister in the U.S. illustrate the complexity of the situation. It is the greatest crisis in Latin America since the “dirty wars” of the 1970s and 1980s.

Luis is a Mexican documentary photographer and a National Geographic Explorer. While studying civil engineering, he worked as an assistant to several international photojournalists and published his first body of work focusing on the social inequality that exists just a few kilometres from his university in Mexico City, leading to his project 'The Last Peasants'.

In 2018 he graduated f​rom the Visual Journalism Program and Documentary Practices at the International Center of Photography with a Wall Street Journal Scholarship. He has been selected for PDN’s 30 New and Emerging Photographers to Watch and for the World Press Photo 6x6 Talent Program from North and Central America. His work has appeared in The New York Times, The Washington Post, The New Yorker, The Wall Street Journal, The Guardian, Bloomberg News and elsewhere.