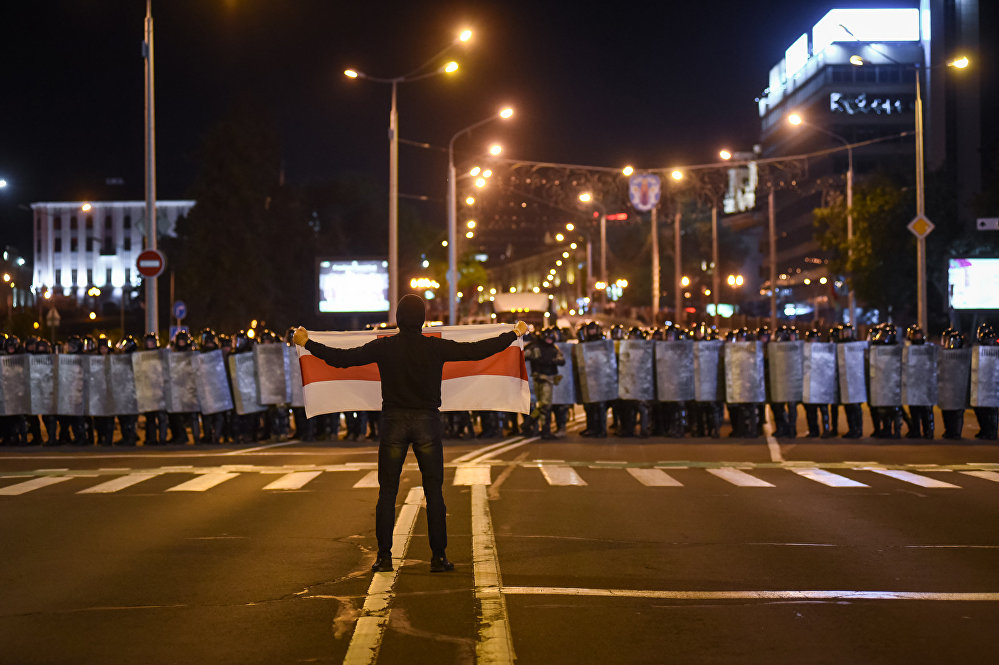 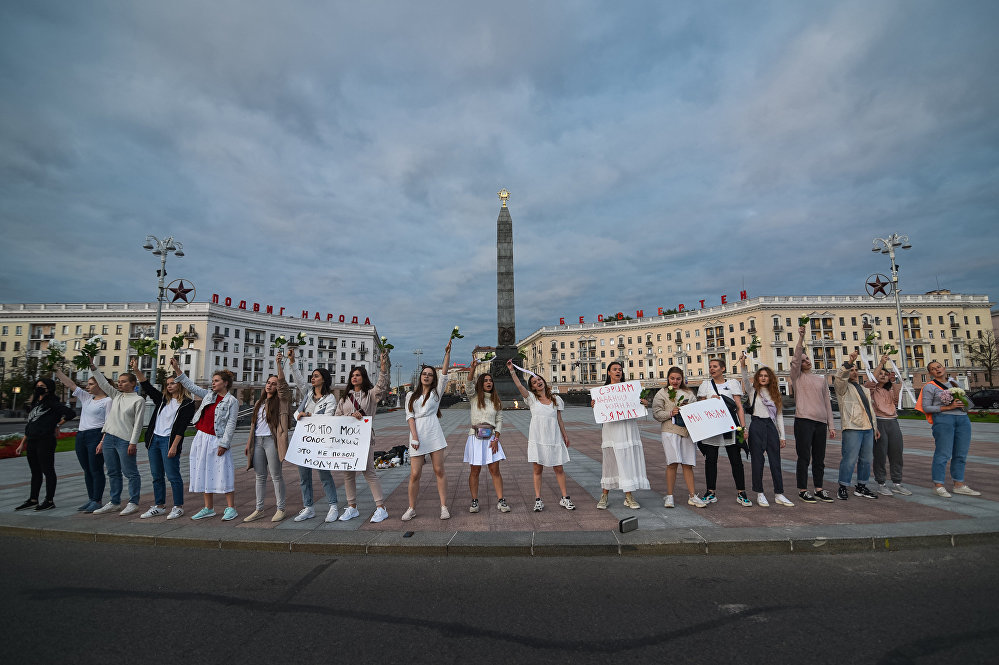 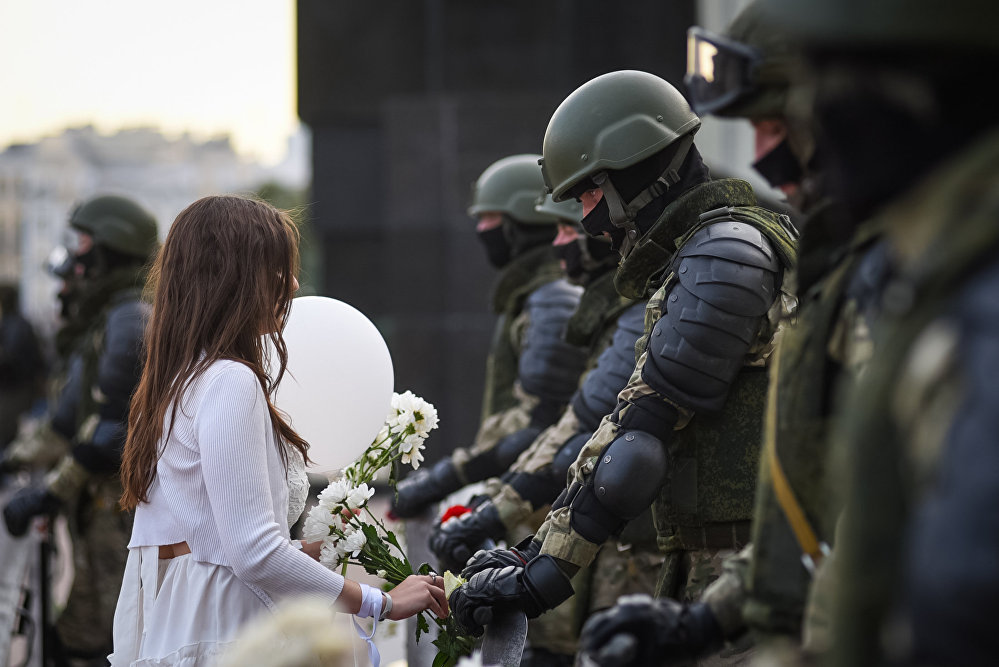 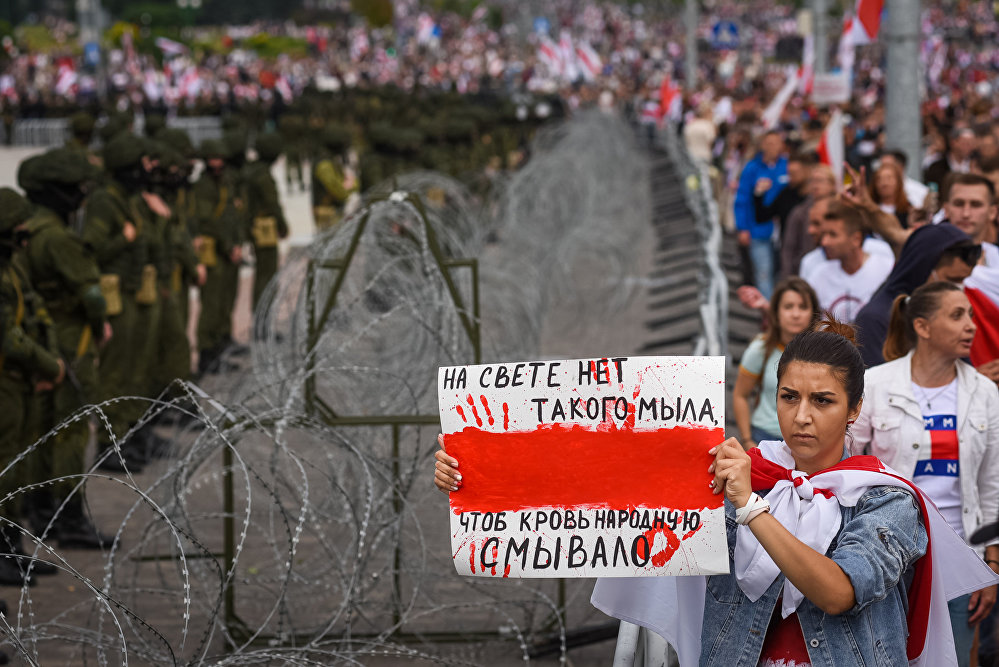 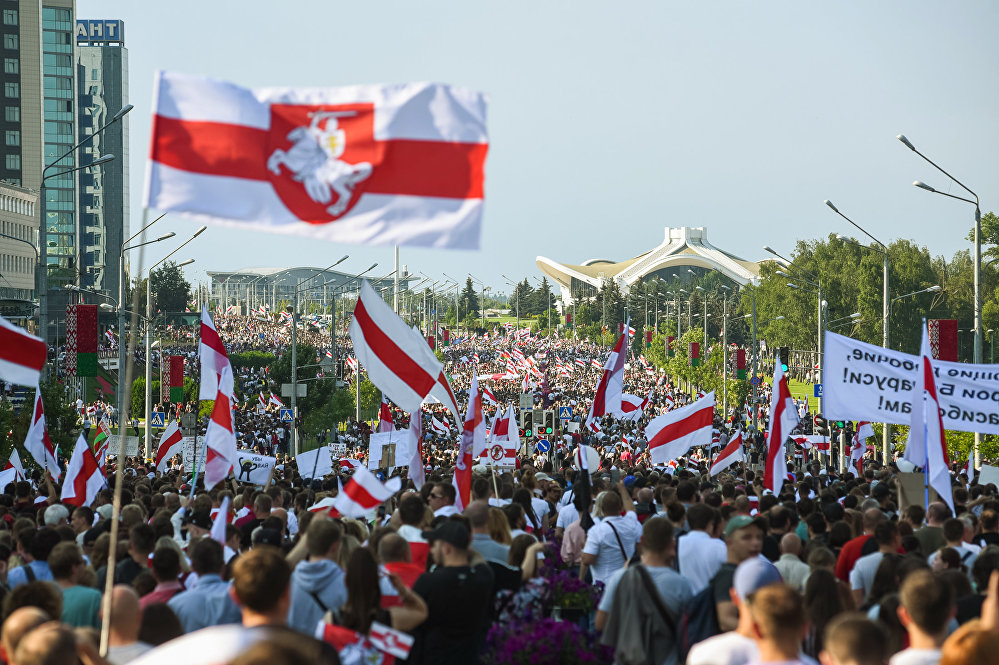 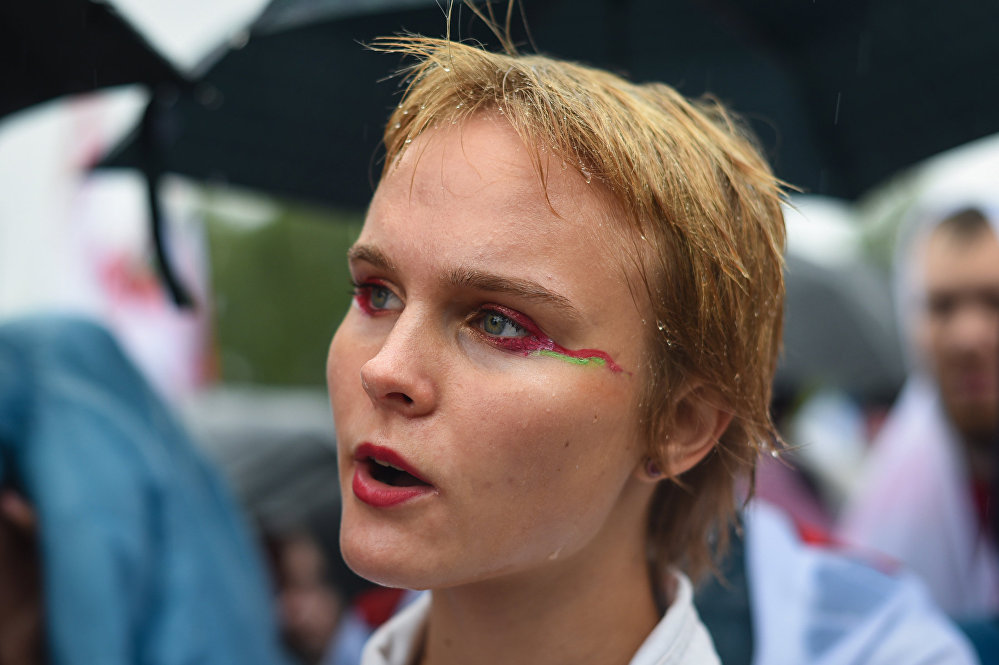 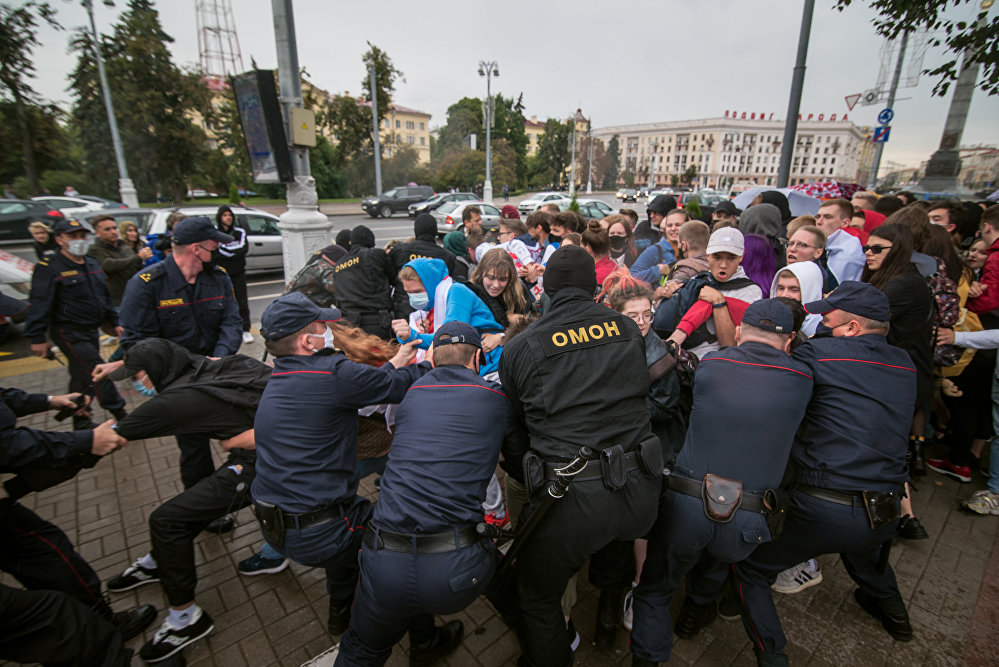 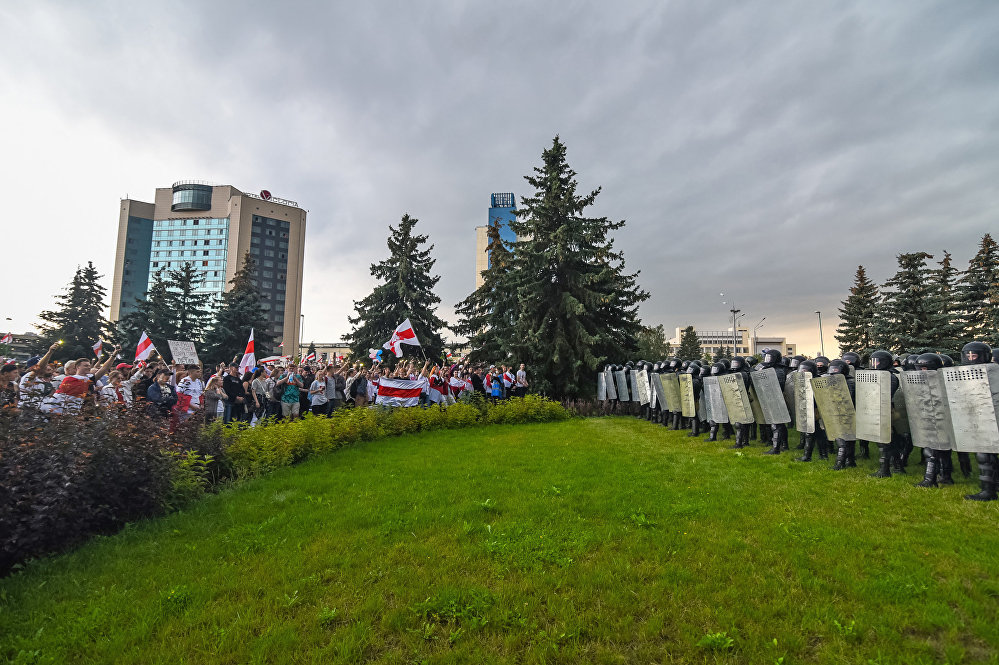 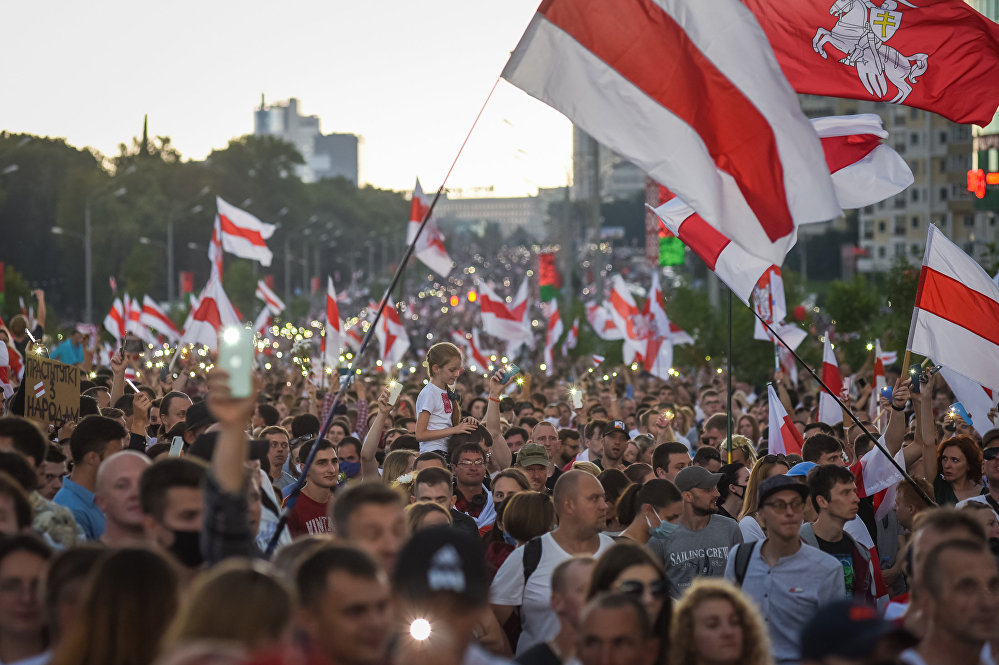 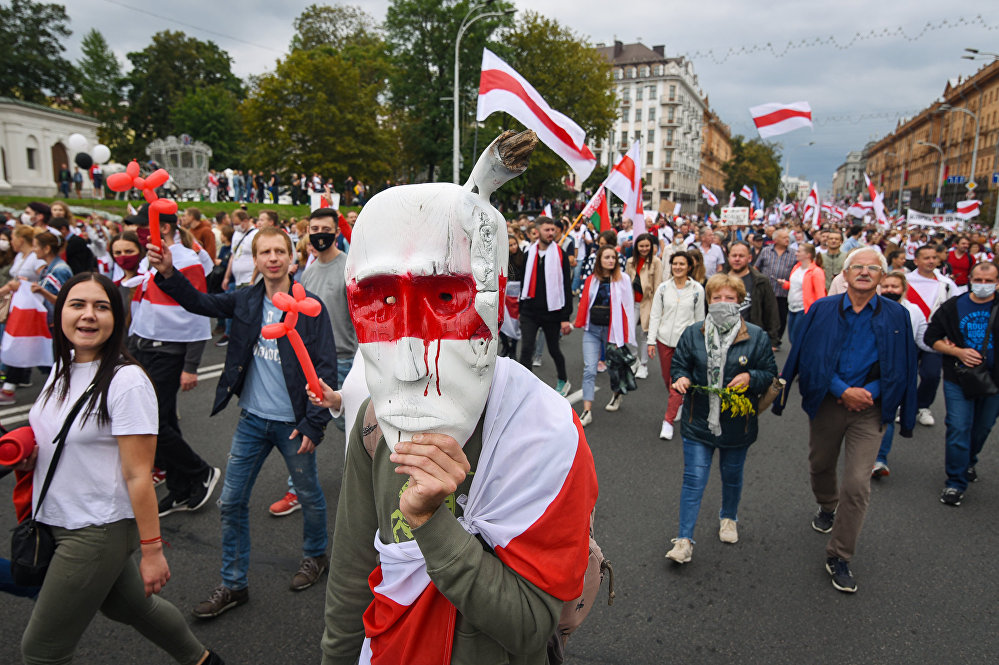 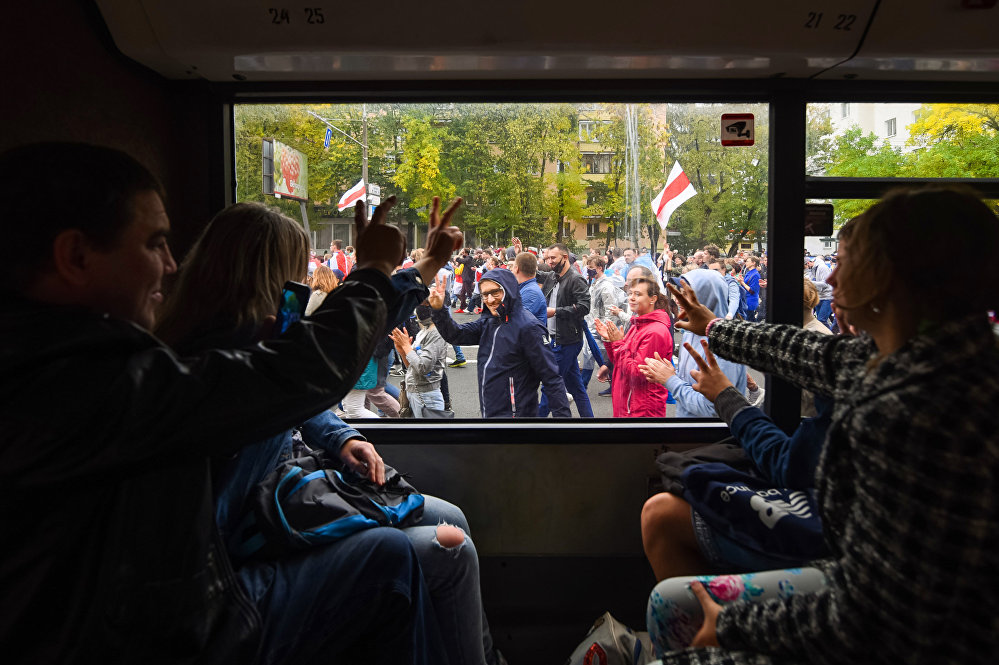 A man stands with an old national flag, now the opposition’s main symbol, in front of a police cordon. Several thousand protesters took to the streets in the evening following presidential elections, with law enforcement officers violently dispersing them. Police brutality soon triggered new protests.
The silhouettes of law enforcement officers during an evening protest in the city’s central districts. At that time, the internet was switched off completely all over Belarus, and many people were unable to get updates on national developments.
Young women in white clothes form the first solidarity chain near the Victory Monument. This new type of street protests came as a response to the police crackdown on protesters.
A young woman in white clothes presents flowers to an Interior Troops soldier. The soldiers cordoned off the Government House during another protest. Women later played a major part in the Belarusian protest movement, they held street marches, and flowers acquired their own symbolic meaning.
A young woman shows a poster to soldiers standing near the Hero-City Minsk Stele. This place became one of the main rallying points for those involved in Sunday protest marches.
Tens of thousands of people gathered for the already traditional Sunday protest march. The marches continued for over three months in a row, and they had different names and routes.
A young woman involved in a Sunday protest march drew red-and-green and white-and-red stripes above her eyes. Her makeup symbolizes the indivisible Belarusian nation.
Arresting students during a student protest march marking Knowledge Day. Many professors and students were fired and expelled from universities for political motives.
Protesters stand in front of a police cordon guarding Independence Palace, the official residence of the President of Belarus.
Tens of thousands of people turned on their telephone lights during a Sunday protest march. Many famous people involved in the protests were later detained and sentenced under Article 23.34 of the Code of Administrative Offenses of the Republic of Belarus. In fact, local courts punished most protesters under this clause.
A man wears a face mask with the colors of the old national flag. According to specialists, protest marches turned into carnivals at a certain point. Apart from flags, posters, suits and streamers, people started bringing various props. Moving platforms with drummers, television frames with fixed images, huge moving flies, etc. also appeared.
Public transport passengers show victory signs to protesters. Victory signs and raised fists became the most popular gestures with Belarusian protesters.

On August 9, 2020, presidential elections were held in Belarus, followed by a wave of nationwide protests that continue unabated. The protesters mostly demand new fair elections, an end to police brutality and repressions and the release of political prisoners. Human rights organizations report numerous human rights violations. Over 1,000 detainees said they had been tortured during and after arrests, as well as at police stations and pre-trial detention centers. Seven people are reported killed. 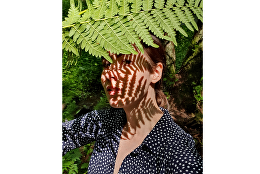 Born in Minsk, Belarus. A trained economist, she has been working as a freelance photojournalist since 2012, contributing to several Belarusian media outlets.