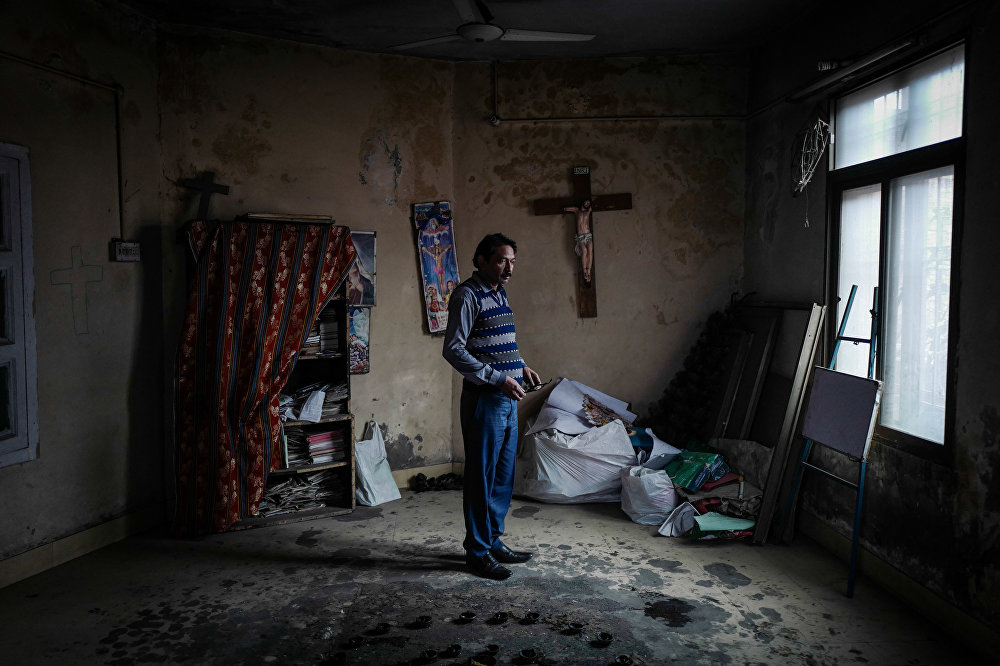 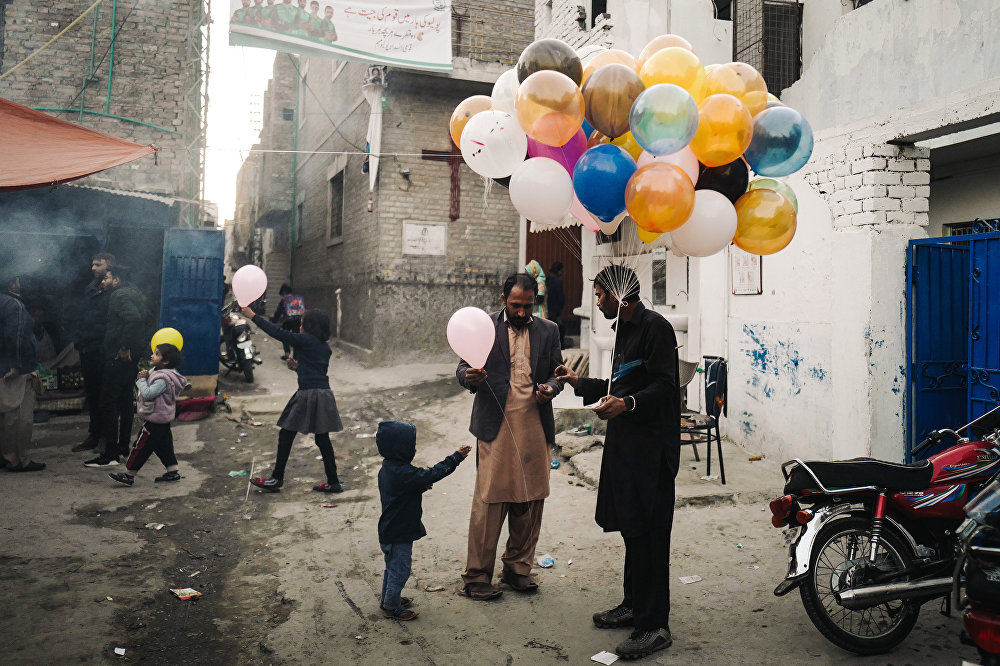 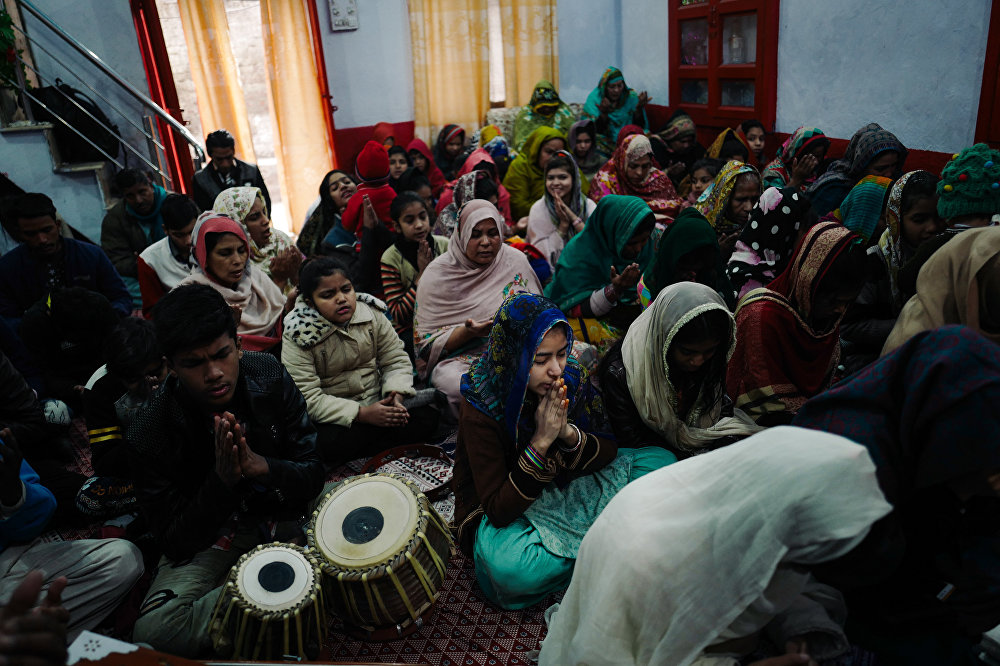 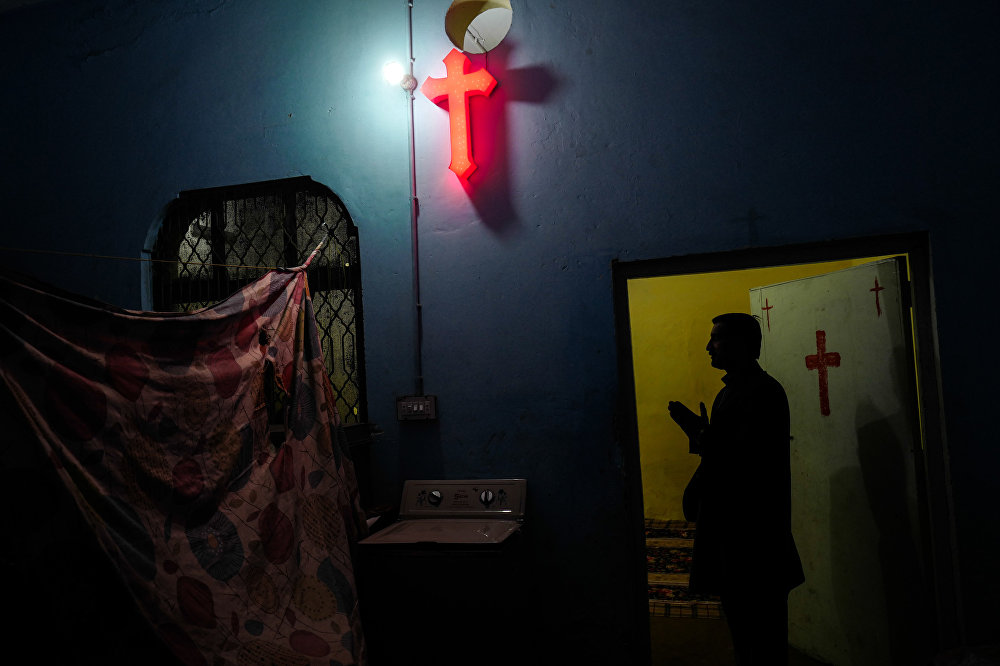 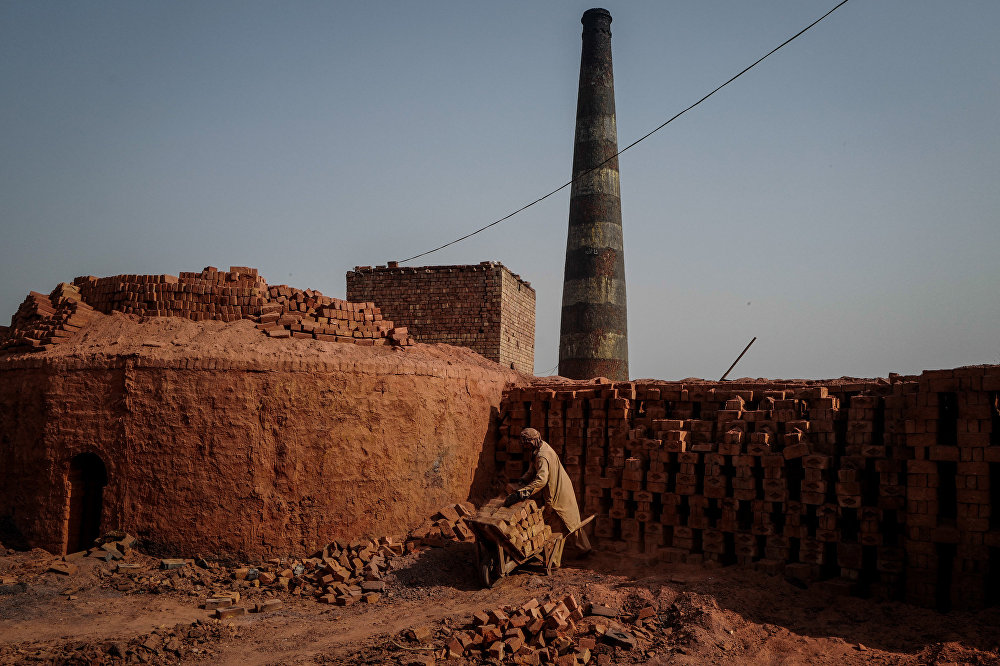 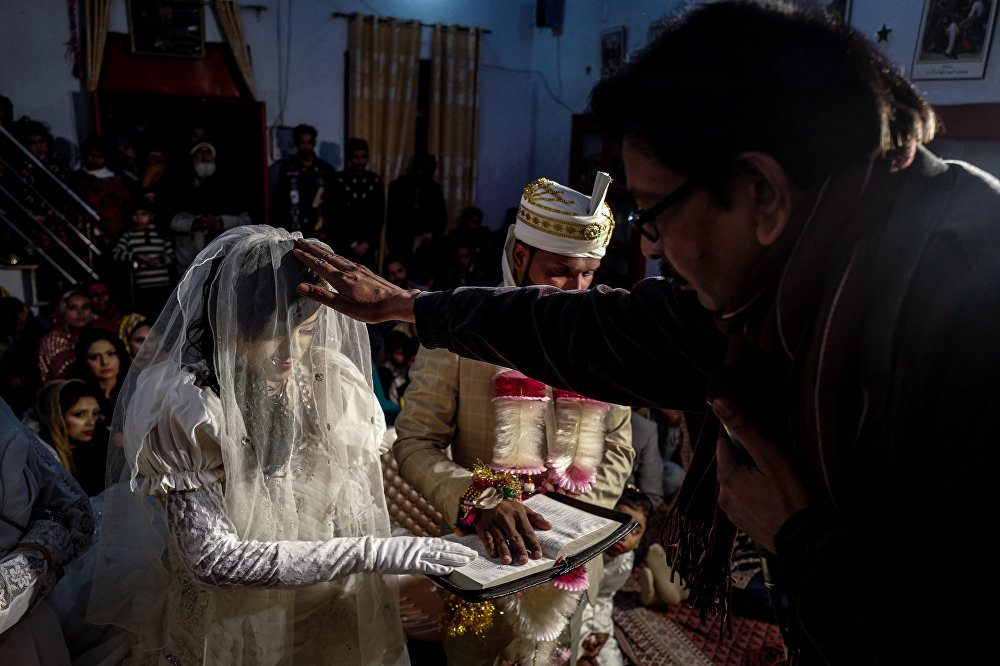 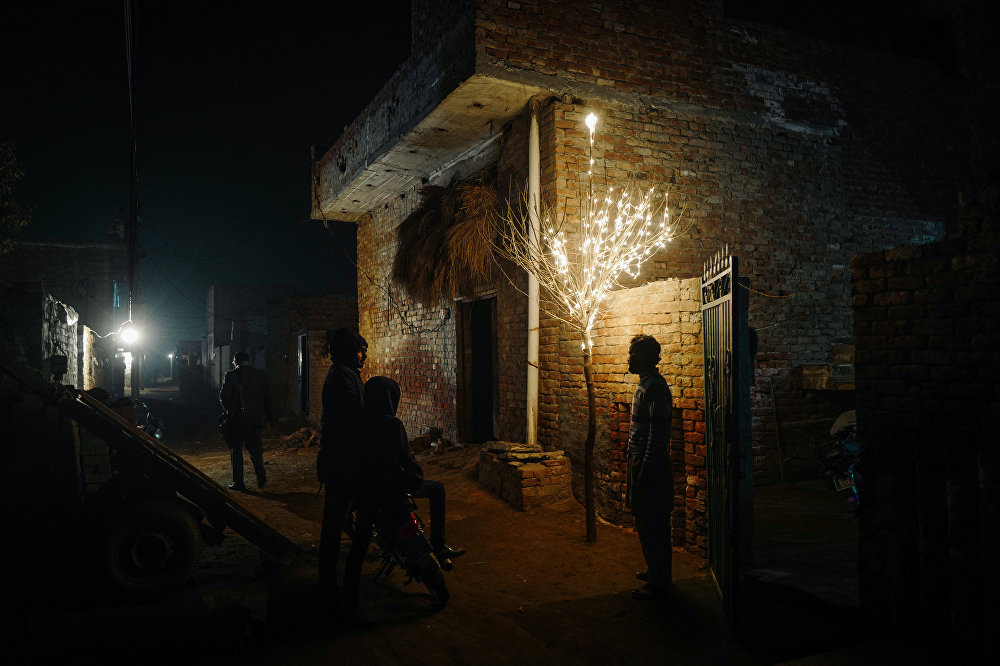 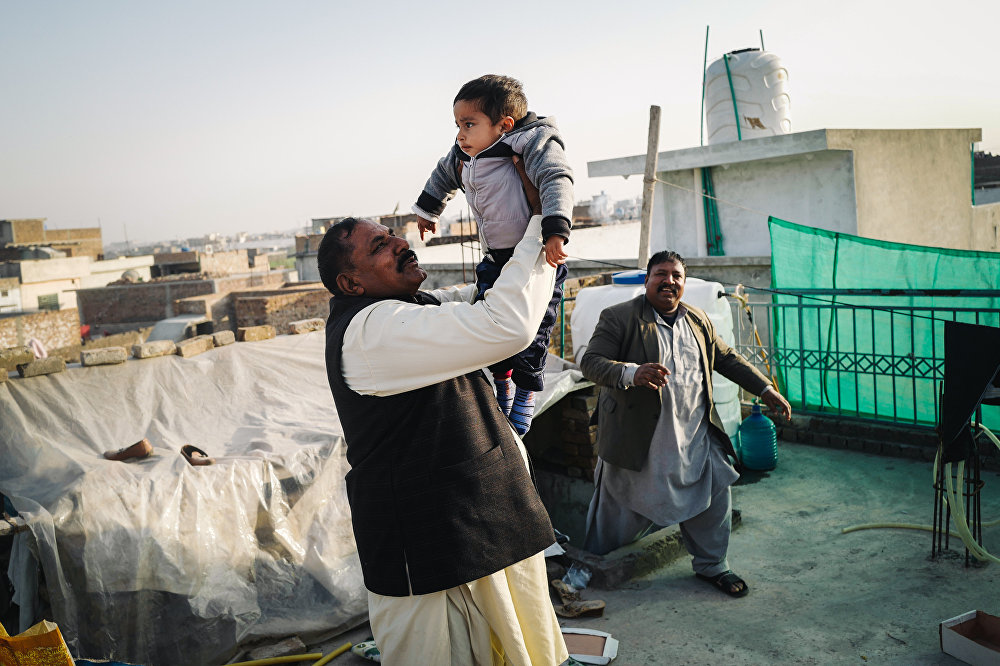 Father Pervez Palos in his church in Joseph Colony in Lahore, which was set on fireby a Muslim mob on March 9, 2013, after one of the young Christians of the colony was accused of blasphemy. “We just had time to take shelter inside the nearby factory and watch our houses burn,” explains one of the residents. January 2021.
Father Haroon Tazeem celebrating mass in a hidden house in Essa Nagar, near Lahore, on January 18, 2021. “It is better like this, for safety reasons,” he explains. February 2021.
A dad buying balloons for his son for 20 rupees (around 10 cents) in the French Colony, where 8,000 Christians live, in the center of Islamabad, Pakistan’s young capital whose name translates as “The city of Islam.” January 2021.
A group of women praying during a Sunday morning mass, at a church in Joseph Colony, one of the slums where Christians live in Lahore, the country’s second most important city. January 2021.
Pastor Majeed Inayat praying in the church that he built 20 years ago on the first floor of his house in Joseph Colony, Lahore. January 2021.
Brick factory, Lahore suburb, Punjab. The majority of workers are Christians, living in small houses next to the factory. During a "good day’s work", a worker can make up to 1,200 bricks, earning $7. They all work, brick by brick, to pay off never-ending interest on ever-increasing loans from the owner. "During winter, when bad weather forces the factory to close, I have to borrow money from him to be able to feed my family. Then, when it reopens, we all have to work to pay that loan back," one of the workers explains. January 2021.
Nageli, 26, arriving at church on her wedding day in Joseph Colony, Lahore. January 2021.
Nageli, 26, and her husband at their wedding in Joseph Colony, Lahore. January 2021.
Every day for the past 6 years , Naaz Bano has been cleaning and dusting the photos and medals of her son Akash. In March 2015, he was among the volunteers in charge of security at the Saint John Catholic Church, in Youhanabad, Lahore’s biggest Christian neighborhood. A terrorist came in, wearing an explosive belt. Akash grabbed hold of him. “I am going to blow myself up,” the man said. Akash didn’t let go of him. A few seconds later, the explosion was heard all over town. His courage prevented a bloody massacre inside the church. “I am so proud of what he did and so proud that we never forget him: he would have turned 27 this year.” Youhanabad, Lahore. January 2021.
A Christmas tree in the streets of Essa Nagar Christian colony, Lahore. January 2021.
Rashid Mesih, 62, plays with his grandson Daud on the roof of the family house in Iqbal Town, one of the Christian neighborhoods of Islamabad. His cousin Salim is standing behind him. They were both falsely accused of blasphemy. After spending 5 years in jail, they fought and got their freedom. They are now hiding at home, afraid of reprisals from extremist religious groups. February 2021.
Dana, a young Christian from Youhanabad, in the bedroom that she shares with her mother. Every day, she helps her mother clean the church before mass. January 2021.

Limited to the most degrading jobs, from sweepers to brick kiln workers, living for the most part in city slums, falling victim to false accusations of blasphemy, the life of Pakistani Christians is a real way of the cross. Inside Joseph Colony, a Christian ghetto north of Lahore, families are slowly recovering from the trauma of March 9, 2013. After one of the community’s young men was accused of blasphemy, a Muslim mob attacked the slum, looting, and burning most of the houses. Three hundred kilometers further north, in Islamabad, 8,000 Christians live in the French Colony, a slum consisting of about a hundred houses, fringed by the ambassadors’ villas, with no access to drinking water. In this young country, which is less than 80 years old, and was initially created as a promised land for Indian Muslims, religious extremism is on the rise, and Christians are living with the overriding fear of being accused of blasphemy, and punished by death penalty. 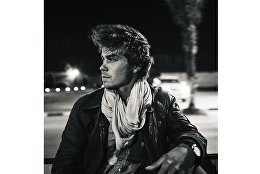 A French freelance photojournalist, who focuses on Islamic republics and collaborates with Le Monde and AFP. In early 2021, he traveled on his own for three months in northern Pakistan, exploring Pakistan identity for his project "The land of the Pure".